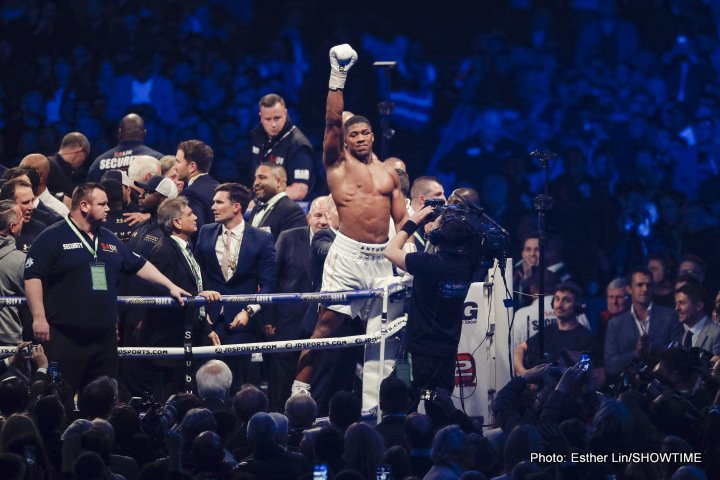 A new king has made himself known to boxing and those beyond our doors. Joshua assured us that this day would come, even going in to wage war against a man who graces the list of the effective heavy weight boxing champions. 2017 is a year Joshua will always remember in this phase and those yet to come. It was the year he exhibited the components that has seen him hailed the division’s new king, promising to dominate the division with sheer devastation and tactical brilliance that those before him have inspired.

I know that Anthony Joshua is by no means the complete package that his talents will unveil in the journey his career. It has been these aspects which I found raising caution in the strategy against Klitschko. Despite the obvious shortfalls, Anthony Joshua mustered the heart and intensity to punctuate his existence on this new era.

He met the challenge and lessons that Wladimir brought him from his own journey and experiences. Wladimir was consistent and served punishment with notable accuracy. There is great experience that Joshua takes from meeting one of boxing most decorated kings. The opportunity to be forced to find within himself a fire to rise against the wiser hands.

He unloaded with boulders in each hand punishing Wladimir’s torso and cranium; gassing himself out before the end of the round.The old fox pounced on him with measured attacks giving lessons where youth was found lacking. As the English fans cheered their man; Joshua was led to reconcile his desire with the test at hand. He was forced to rescue himself through the testing waters that Wladimir flooded him with. He was split with a powerful blow leaving him knocked down, gathering his composure to save the dream before him. Those were some nerve wrecking moments not only for the bet I had lined up but the prediction that I so loudly voiced. Even here Joshua gathered his senses seemingly ignoring the temptation of energy sapping anxiety. He employed a maturing tactical approach in gathering himself in quieter rounds for that explosive 11th round.

He overcame the fires Wladimir lit, obliged himself upon the throne by sending the decorated Klitschko into the referee’s wings of grace. It was at this moment that his era was announced.

Joshua’s arsenal is not yet ripe and at times during this fight the old fox exploited the attributes youth had not yet refined. He did not claim to be perfect but he promised to deliver a win and he did so in remarkable fashion. He shook off the claws that nearly punctured his goal, cementing the beginning of his reign.

There are some exciting bouts outside that with Wladimir; I wonder how exciting another match up would prove.

Tyson Fury has made himself known and believes himself to have contained Wladimir with greater ease; perhaps it is something I will not deny. However the fight we just witnessed was far more exciting because both fighters were present to every campaign within the battle. Fury will not sustain the onslaught Joshua presents, it is Wilder who I deem more dangerous but even in such a bout it is Joshua I see as the victor.

19 fights, 19 wins, 19 Kos Joshua is gifted; he has risen to the highest courts on multiple platforms. His attributes, focus and humility are the making of the champion we will see continue his reign across all kingdoms. He rewrote the story his life was unfolding to connecting with the hopes of those who saw light in his ability. He will return in the latter half of the year and will devastate his next opponent with an evolved mould. This is his kingdom, his throne an era to establish his legacy and raise boxing’s story.