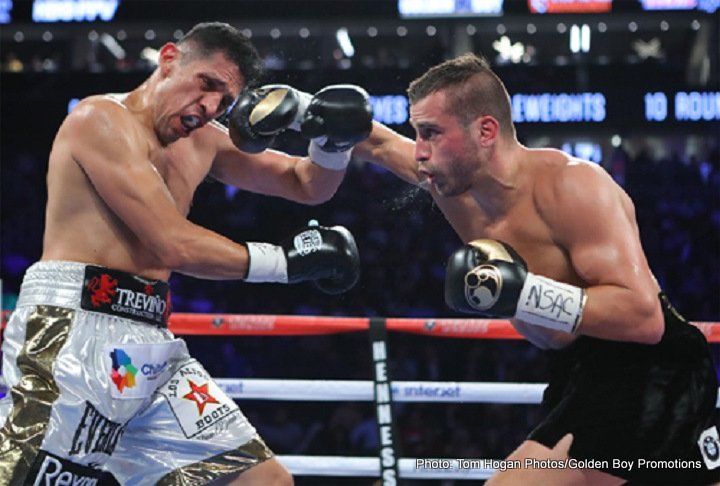 Middleweight contender David Lemieux (39-3, 33 KOs) tried his best to score a quick knockout over high level journeyman Marcos Reyes (35-5, 26 KOs) tonight, but it failed to happen so he had to settle for winning a one-sided 10 round unanimous decision on Saturday night on the undercard of the Saul Canelo Alvarez vs. Julio Cesar Chavez Jr. card at the T-Mobile Arena in Las Vegas, Nevada.

Lemieux made not have gotten the knockout, but his fight was the most entertaining one of the entire card, which isn’t saying much because there were some real duds on the HBO PPV portion of the card, starting with the main event between Canelo and Chavez Jr. Lemieux, 28, went all out in emptying his gas tank in round 1 through 4 in trying to knockout Reyes.

Lemieux was exhausted by round 5. A bloodied up Reyes had some success in the second half of the fight with his energy and combination punching. But ultimately, Lemieux was still too powerful for him to get back into the fight.

Lemieux slowed the action down dramatically in the last five rounds of the fight. It was troubling to see how tired Lemieux, because he looked like the same fighter that gassed out against Marco Antonio Rubio and Joachim Alcine in 2011. He lost both of those fights. The difference tonight was Reyes didn’t have the punching power to take advantage of Lemieux’s fatigue.

Golden Boy need to have Lemieux target WBO middleweight champion Billy Joe Saunders if they want him to become a world champion again, because he’s going to beat Golovkin if the two face each other again. I don’t think Golovkin is going to move up in weight to 168 next year to open up his three middleweight titles. He’s too small and there’s nobody to fight in that empty weight class.

Lucas Matthysse (38-4, 35 KOs) took care of business in stopping Emanuel Taylor (20-5, 14 KOs) by a 5th round knockout. Taylor was down in the 3rd and 5th. He got up in the 5th round after being dropped by a left-right combination by Matthysse. Referee Jay Nady stopped the fight after looking Taylor over and deciding not to let it continue. This was the first time that Taylor had been knocked out in his career.

He’d been beaten previously by Chris Algieri, Adrien Broner, Antonio Orozco and Prenice Brewer. Tonight, Taylor was totally over-matched by Matthysse, who hurt him again and again with big power shots. Taylor was badly hurt 4 times in the fight. He couldn’t take Matthysse’s punches when he would load up on them.

It was a good fight for Matthysse, who hadn’t fought since losing to Viktor Postol in 2015. This new division suits Matthysse. However, he’s going to need to go after the two fighters right away because he doesn’t have enough youth left at 34 for him to take his time.