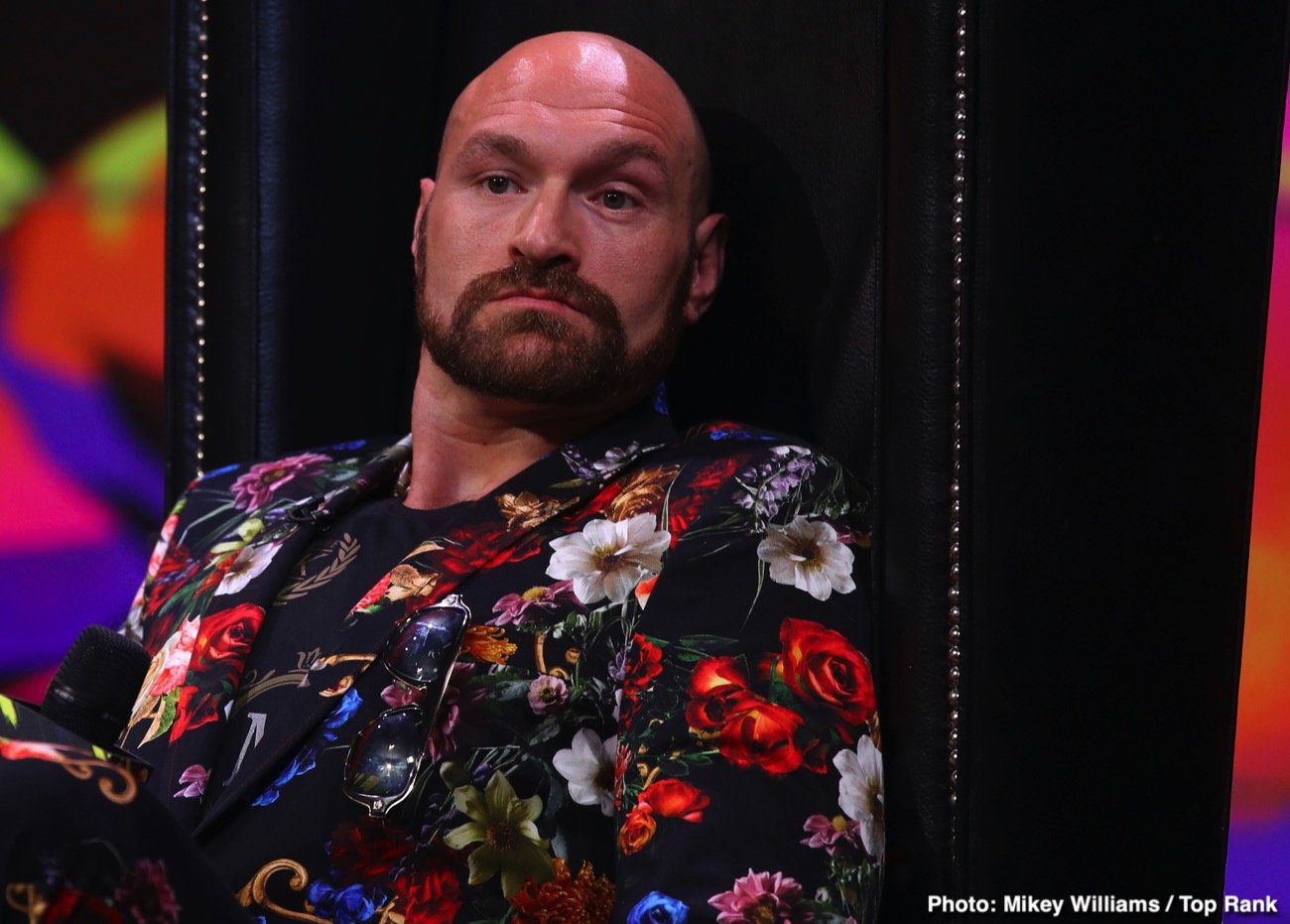 Somewhat worryingly, WBC and lineal heavyweight champ Tyson Fury said today of a super-fight with Anthony Joshua, how, “we’re no further forward today than we were a year ago.” Speaking with ESPN, Fury said he absolutely will fight twice here in 2021, so as to make up for lost time. Fury as we know has not boxed since his rematch win over Deontay Wilder (you remember him, right?) a year ago. Fury says he feels the Joshua fight has “got to happen sooner or later,” but that if it’s not Joshua next, he will fight someone else in April or early May.

Fury said the ongoing Covid restrictions (hopefully soon to be lifted, hopefully fully, in the summer) are the main obstacles standing in the way of a fight between he and Joshua getting signed, sealed and delivered.

“I’ve been out for over a year. By the time I fight again, looking at maybe June is this Joshua fight happens, that will be a year and six months out of the ring, which is not ideal preparation for any superfight,” Fury told ESPN. “They’ve had a full year to try and make this fight happen. Since the last Wilder fight, even before the Wilder fight, they were talking about a fight potentially between me and Joshua. They’ve had a full year to make something happen, and it hasn’t happened as of yet. It is what it is. We’re no further forward today than we were a year ago. The way [Covid] is at the moment, I don’t think [negotiations] got much to do with the fighters. It’s to do with the venue, date, place, site fees. It’s to do with everything but the fight itself. If that fight doesn’t happen this summer, it’s got to happen sooner or later. But Top Rank has got to get me two fights this year. I will fight two times on ESPN. I don’t care who it is. If it’s not Joshua, we’re looking to fight in April of early May, and then the end of the year. If it is Joshua, then June and the end of the year. Bang, bang.”

So are you coming away from reading this feeling optimistic about seeing the Fury-Joshua fight? Maybe not. With Fury saying zero progress has been made with regards to getting that fight over the line, and with Fury talking about taking other fights, and with Fury saying he “doesn’t care who it is” he fights in his two planned run outs on ESPN, it’s hardly time to get excited about seeing Fury get it on with Joshua. Certainly, what Fury has had to say on the Joshua fight does not ring with Eddie Hearn’s, “it could be done in the next couple of weeks” optimism. Hearn has said that more than once, yet here’s Fury saying “we’re no further forward today than we were a year ago.”

Call it mixed signals from the fighter and the promoter of his would be rival.

But who might Fury fight in his two ESPN bouts? And what if Fury were to lose a fight – where would the Joshua mega-fight be then? If this all-British, history-making fight does not happen this year it really will be unacceptable. We fans were jerked around pretty good by all that back and forth, ultimately fruitless negotiating between Joshua and Wilder, and we lost the big fight as a result. This cannot happen again here, surely. Of course, Fury wants to fight, he has been forced to remain idle for far too long. But we were all led to believe Fury would be fighting Joshua next. Is this not the case?

2 thoughts on “Tyson Fury Says He’ll Fight Twice This Year, With Or Without Anthony Joshua”