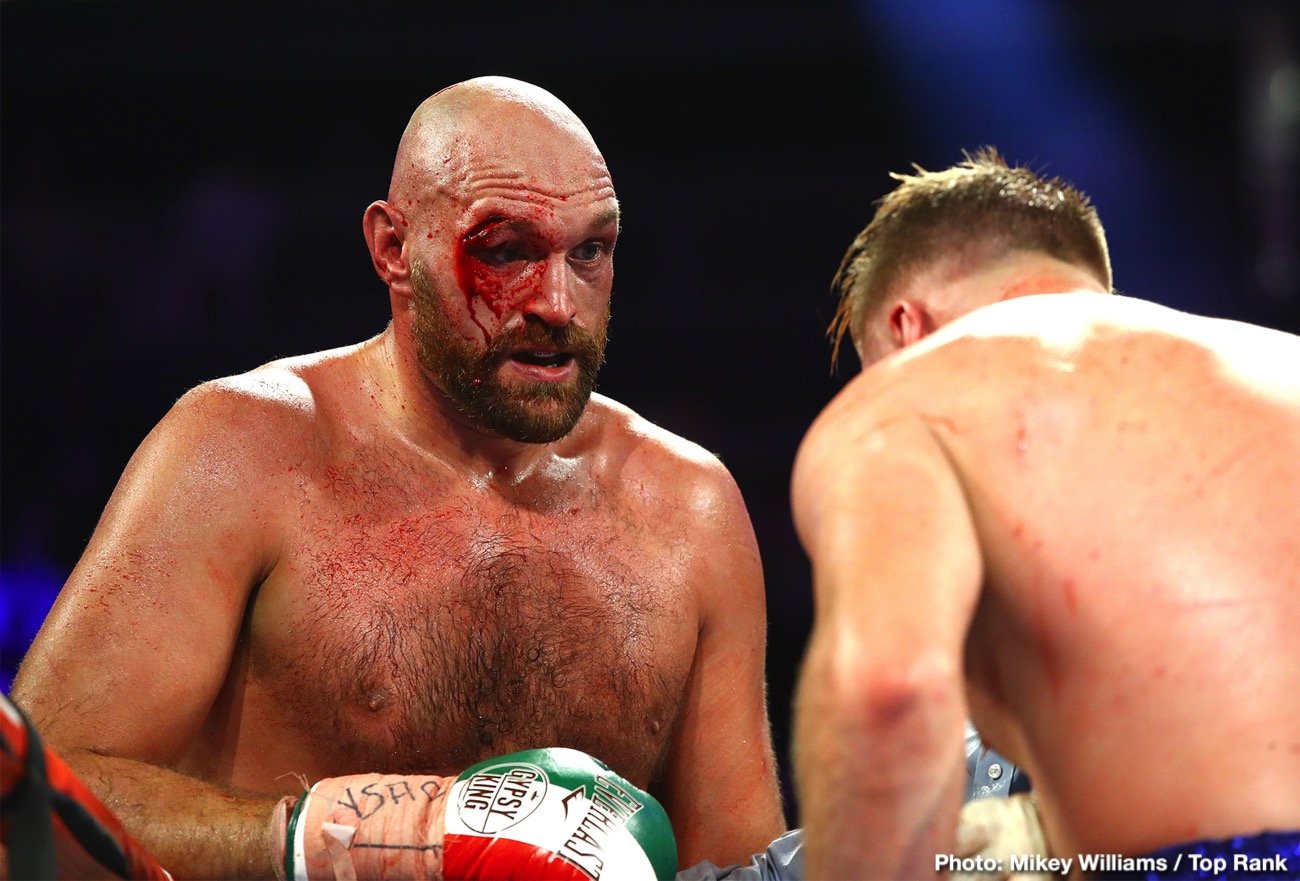 So much for an easy fight. Proud claimant of the lineal heavyweight crown Tyson Fury had one of the toughest fights of his career last night in Las Vegas – at least he put on one of the worst performances of his championship level career. Fury overame a determined and tough Otto Wallin to remain unbeaten and keep his February date with Deontay Wilder alive, yet Fury suffered a terrible cut to his right eye in round-three.

With blood pouring from the wound – actually two cuts to the right eye, one above, one below – Fury was forced to dig deep and plead that the fight was not stopped. In the end, the blood still troubling his vision, Fury prevailed on the cards by scores of 118-110, 117-110 and 116-112. Fury, expected by most to blow southpaw Wallin away, improved to 29-0-1(20) with his hard victory. Wallin, who showed he belongs at top level, lost for the first time in dipping to 20-1(13).

But now the questions are being asked:

Will the nasty cut (Fury taken to the hospital after the fight) heal in time for the scheduled February 22 return fight with Wilder to go ahead as planned? If the cut did re-open in a fight with the lethal-hitting Wilder, would Fury, unable to see, get badly KO’d? Does Fury need a new trainer?

John Fury, father of Tyson and last night’s pundit for BT Sports, laid into Fury’s current team after the fight, also stating on air how there is no way his son should come into any fight weighing less than 19-stone.

“That’s the worst I’ve seen my son,” John told BT. “I think he’s lucky to have come out the winner, to be honest, very lucky indeed. I’m very proud of the way he mauled his way through it. He needs to go back to the drawing board and see what’s gone wrong here. He’s got down to 254 pounds and his strength and power have gone with it. That wasn’t Tyson. It’s a circus. If I had my way, the lot would be gone (Fury’s current team).”

Harsh words for Ben Davison, etc? Or is John right? Only time will tell.

For now, Fury has a little over five months to go before he is scheduled to lock horns with Wilder again. Will the cut heal in time to allow him sufficient sparring? Again, only time will tell.