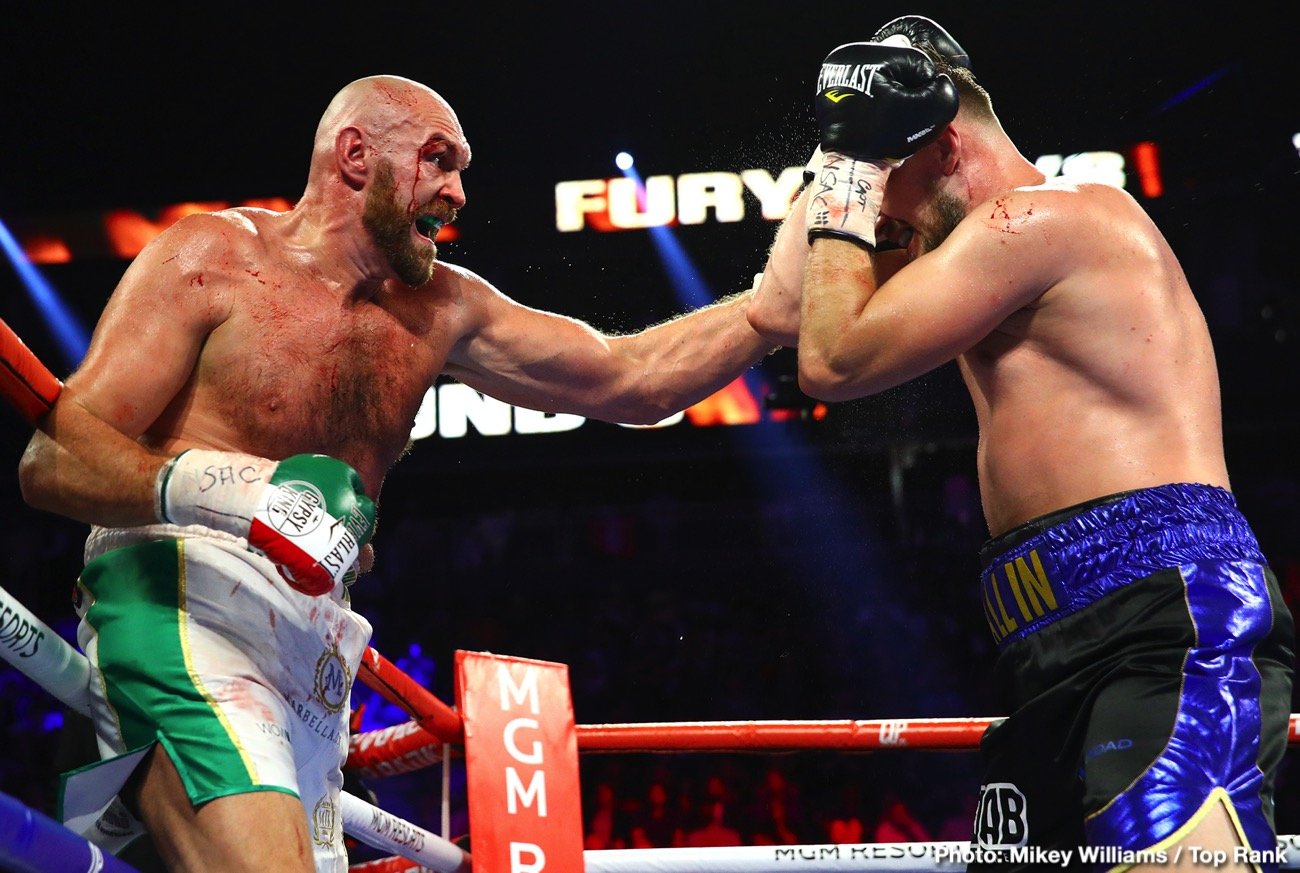 Warren Feels Wilder – Fury Will Go Ahead As Scheduled

One of the big questions fight fans are asking right now is, will the scheduled Deontay Wilder-Tyson Fury rematch, set for February 22, go ahead as scheduled? Fury suffered a nasty cut to his right eye in last night’s way tougher than expected win over Otto Wallin, and though the Wilder rematch is still five months away, it’s at least debatable whether or not Fury will heal in time to be able to put in enough sparring for the massive rematch.

“Well, that’s five months away, he’s got to get it stitched first and see what happens,” Warren said. “But the bottom line of that is, the commission doctor I spoke to, he said – although the cuts are deep – they’re not hard to sew. It wasn’t jagged or anything, they were straight splits into the muscle and so forth. So he said they should heal pretty well. It doesn’t affect his standing – how can it? He won the fight! And as I say, he won it with a serious injury.”

The fact that Fury came close to blowing the Wilder return (and who knows, maybe the cut or cuts will take longer than the doctors think to heal and will get in the way of that Feb. 22 date) is exactly the kind of danger Bob Arum alluded to when he said a while back how it “makes no sense” that Fury and Wilder are taking interim fights “with big guys who can punch” ahead of their blockbuster return.

And Arum is still insisting it is too dangerous for Wilder to be getting in there with Cuban danger-man Luis Ortiz ahead of the Fury rematch (Wilder-Ortiz II supposedly set for November 23rd).

“I hope that Al Haymon was watching the fight tonight, I assume that he was,” Arum said after Fury’s ugly win over Wallin. “I mean, why the hell he’s doing a fight with Wilder and Ortiz in November, God only knows. Is it a danger? You better believe it! These are big sons of bitches these guys and anything can happen.”

Indeed. Fury had a way tougher time than most expected he would against the unbeaten but largely untested Wallin, while many fans feel Wilder – who was badly hurt in his first tussle with another southpaw in Ortiz – is in for another rough one should he indeed fight him a second time. It’s sure clear as day that Arum feels Wilder should skip that return and go straight into the Fury sequel.

If Fury is sufficiently healed and ready to go come February 22, that is.