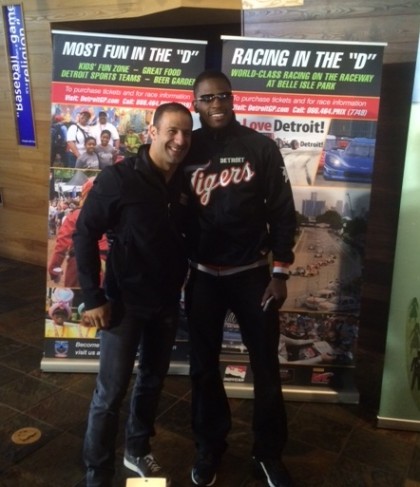 Harrison, 23 and undefeated is a super-hot prospect. He is formerly of the famed Kronk Gym and got some mentorship from the late Emanuel Steward. He has speed and height going for him.

Harrison came to the co-sponsored Detroit Sports Broadcasters Association and Detroit Grand Prix kickoff luncheon recently at Comerica Park. He got some great advice from special guest and prominent race car driver Tony Kanaan. Kanaan is the defending Indianapolis 500 Champion. He drives the No. 10 Target Chip Ganassi Racing Chevrolet in the Verizon IndyCar Series and he knows how to come back from disaster. He had a bad crash in Detroit. He shared champion stories with Harrison. “To be a champion you need skills of course but you need a great heart to push you on when the times are hard,” said the smiling Brazilian. Kanaan will compete in the upcoming Chevrolet Detroit Belle Isle Grand Prix, May 30-June 1.

In 1997, boxer James Toney came to this same luncheon during his championship route. His manager, Jackie Kallen, asked me if Toney could be on this special dais as I had emceed the 1997 Indy 500 Pole position winner’s luncheon at the Ren-Cen, hosted by PPG and the DSBA. That year, the Dutchman, Arie Luyendyk won the 1997 Indianapolis 500 from the pole for his Treadway Racing Team. Maybe the Kanaan-Harrison racing-boxing connection will be just as good for Harrison.

The “Showdown 4 Motown” will be on Showtime. Kaltsas Productions is promoting.
www.neptix.com http://www.detroitgp.com/tickets/

Raymond Rolak is a past president of the Detroit Sports Broadcasters Association.