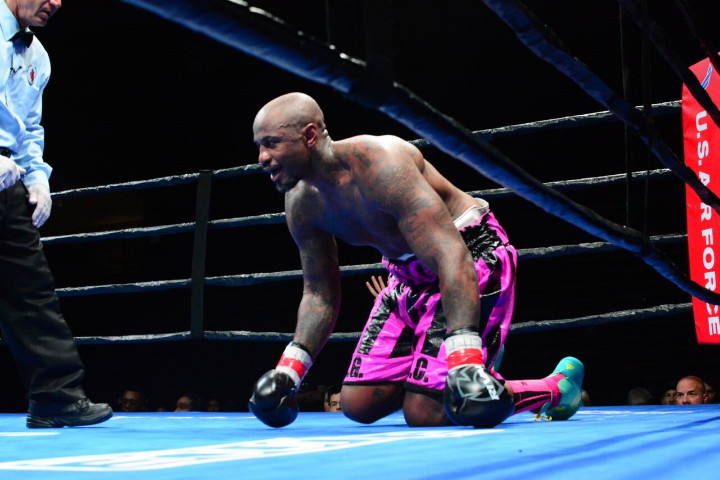 Scott controlled most of the action thoughout the 10-round battle using his superior movement to control the pace of the fight. As he has throughout his career, Thompson refused to give in and scored a big knockdown with a thundering right hand in round nine.

The action continued with the power-punching Sergey Lipinets (8-0, 6 KOs) taking down previously unbeaten Lydell Rhodes (23-1-1, 11 KOs) in a 10-round showdown of unbeaten super lightweights.

Lipinets stalked the athletic-Rhodes early on and wore him down before dominating and nearly-stopping him in the later rounds. Lipinets landed 79 power punches out of 122 landed and his 79 power punches matched Rhodes 79 total punches landed. The final judges tallies were 96-93 and 98-91 twice, all in favor of LIpinets.

Figueroa was able to break through the defenses of the much taller Starks and use his awkward southpaw style score with big right hands. “El Macho” out-landed Starks by a total of 132-113 and was rewarded by the judges with scores of 78-74 and 77-75 twice in his favor.

Davis sent Cruz to the canvas in round one with a straight left-right hook combo and followed that up with an uppercut that put Cruz down again and caused the referee to stop the fight 1:31 into round three.

Here is what the fighters had to say Friday:

“My skill set was good, but this is one of those tapes I will hate to look at when I get home. Tony got away with a lot. I was making him miss and not making him pay. But let’s not forget I haven’t fought for a whole year. I have to get more active, so after this fight, we’ll see what’s next. I’m never satisfied with my performances, but that’s what keeps me going.

“I was hurt in the ninth, definitely. But I’m in great shape and I wasn’t worried about it. I got through it and let him know he’d have to do it again to win this fight.

“Tony’s legs are very slow, so I was just losing him with the feet all night long.”

“He was just too fast. If I were younger I would have caught him. A prime Tony would have kicked his ass, but I’m 44 and the years are starting to pile up.

“Malik did a great job of staying away until I was able to catch him with one good shot. He just pitty-patted his way to victory.

“It was an outstanding performance by Malik. He did what he’s supposed to do to an older fighter.”

“I had him hurt in the eighth, ninth and tenth rounds. Definitely. I was hurting him with every punch, but he was holding so much it wasn’t easy to finish him off. Plus he takes a good punch.

“I learned to put more combinations together. I came to fight, not run.

“He thinks he won the fight? He’s the only one in the whole arena. I won every round. They gave him a few rounds. He should be happy about that.”

“The judging is what went wrong. I won this fight. I felt I controlled most of the fight until the last couple rounds.

“He came on strong in the later rounds. He caught me in the seventh, eighth and ninth rounds, but I controlled the first six.

“He wasn’t that strong. He had good pressure, but I was never hurt in the fight.

“I knew Javontae was a great fighter, but I was prepared for him. He hit me a lot but I was in too good of shape to be hurt.

“I’m so thankful for this opportunity. I appreciate it. Prichard Colon this was for you.”

JAVONTAE STARKS
“It was my fault for leaving it to the judges. I feel like I could have done a lot more.

“A unanimous decision is a little tough to take. I gave a lot of rounds away. I need to be busier next time. It was a learning experience.

“It takes character to come back from a loss and I will come back better than ever.”

“I did well. I need to work on some things. I listened to my corner and to Floyd, I’m thankful for everyone who got me prepared.

“We’ll get right back into the ring and continue to get better.”

“Gervonta is a young kid from Baltimore who comes from a rough background like myself. He works hard and is dedicated to the sport of boxing.

“Mayweather Promotions wants to take him to the next level. The ultimate goal is to see him break all of my records.”