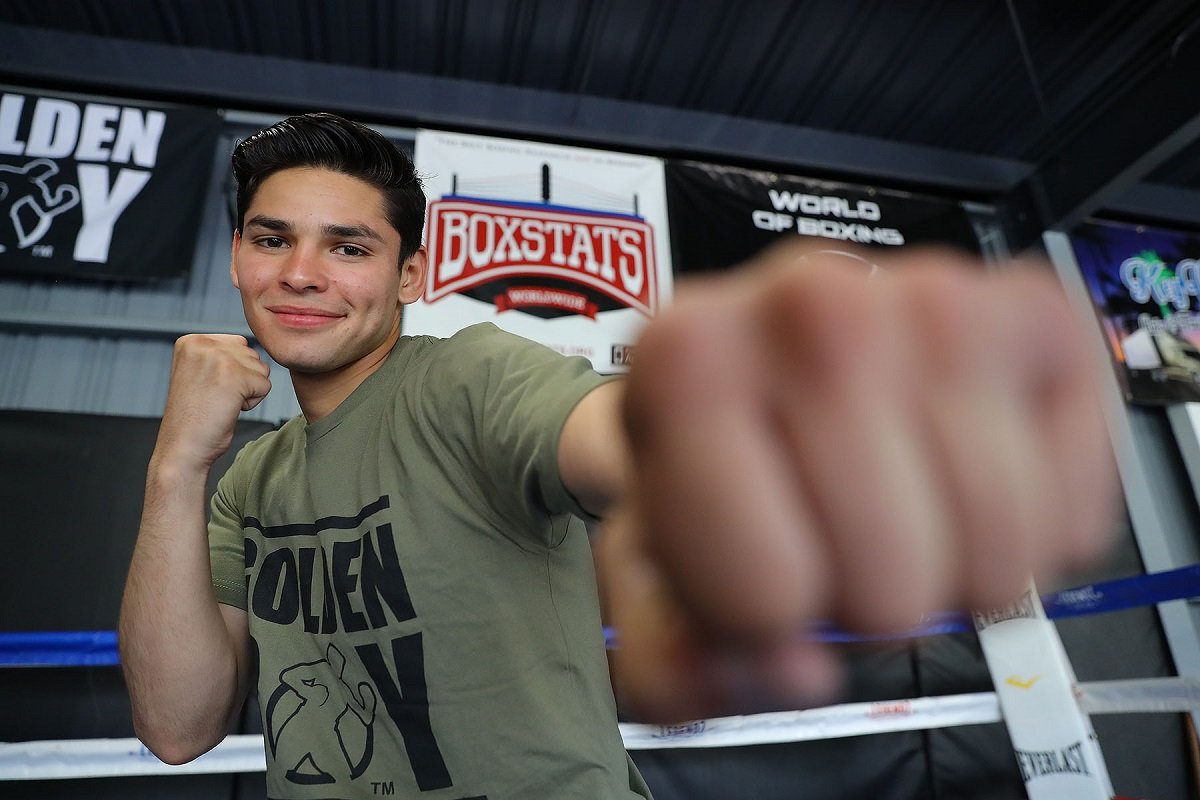 Ryan “The Flash” Garcia (14-0, 13 KO) hosted a media workout today at Legendz Boxing Gym in Norwalk, Calif. ahead of a very special May 4 edition of Golden Boy Boxing on ESPN at StubHub Center in Carson, Calif. Garcia will kick off the Cinco de Mayo festivities as he faces seasoned Puerto Rican contender Jayson “La Maravilla” Velez (26-4-1, 18 KOs) in the 10-round main event in the super featherweight division. ESPN2 and ESPN Deportes will air the fights beginning at 10:30 p.m. ET/7:30 p.m. PT, and stream live on ESPN3 starting at 9:00 p.m. ET/6:00 p.m. PT.

Here’s what today’s participants had to say at the media workout:

“This is going to be an amazing event. This will be another step in my legacy, and I look forward to a world-changing fight. It doesn’t matter how much experience Jayson Velez has. I’m going to fight the way I fight, whether he fought for a world title or not. I’m going to see how he fights, and I’ll know what to do.”

“I’ve noticed that he drops his hand a lot, so I’m going to feint to the body and catch him with my left hook. This fight is going to end in the fourth round. I may end it early, but I say it’ll end in the fourth round. The knockout doesn’t have to be with one punch because I also know how to end fights with a barrage and force the referee to end it. These two belts [NABF and NABO Super Featherweight Titles] will be on the line, and I know the the next fight will be for a world title.”

“I train how I always do, no matter who my opponent is. Of course, it is helpful to know who I am fighting from the beginning, but either way I’m going to be very much prepared. It feels great to have young girls following me. When I grew up, I didn’t have many girls in boxing to look up to. I looked up to Roy Jones, Jr. So I’m happy girls are looking up to me.”

“I know this is an experienced opponent. We’re going to take advantage of this opportunity to fight at StubHub, and we’ll do what we love, which is fighting. Hopefully by the end of the year I can have my first 10-round fight.”

“I’m happy to be working with my new trainers, the Saucedo Brothers, at Westside Boxing Club. We’re great friends outside the gym, but in the gym, they are my coaches and there is a lot of respect. I’m excited about fighting on a Golden Boy card. I’ll be going in with everything, and if the knockout comes, it comes.”

(ABOVE: Azat Hovhannisyan talks to the media ahead of his fight against Rey Vargas for the WBC Super Bantamweight World Title on May 12 and televised live on HBO World Championship Boxing)

Azat “Crazy A” Hovhannisyan (14-2, 11 KOs) also participated in the media workout today. Hovhannisyan will challenge Rey Vargas (31-0, 22 KOs) for the WBC Super Bantamweight Title in the co-main event of spectacular card at Turning Stone Resort Casino on Saturday, May 12. The event is chief support to the 12-round co-main event to Sadam “World Kid” Ali andLiam “Beefy” Smith for the WBO Junior Middleweight World Championship. The doubleheader will be televised live on HBO World Championship Boxing beginning at 10:00 p.m. ET/PT.

“Ever since I was a kid in Armenia, I was trained to fight with an exciting style. I had over 200 amateur fights, and that gave me a lot of experience. I lost my professional debut, but I knew I was better than that.”

“Rey Vargas is a dangerous opponent. He’s very tall and long, but beside that I don’t see anything else. I’ve sparred with a lot of tall opponents, so I know how they fight, and I’ll be more than ready to beat him. A win over Vargas would not only mean a lot for me and my family, but also for my entire country.”

Ali vs. Smith is a 12-round fight for the WBO Junior Middleweight World Championship presented by Golden Boy Promotions in association with Frank Warren. Vargas vs. Hovhannisyanis a 12-round battle for the WBC Super Bantamweight World Title presented by Golden Boy Promotions inassociation with Promociones del Pueblo.The event is sponsored by Tecate, “THE OFFICIAL BEER OF BOXING” and Casa Mexico Tequila. The doubleheader takes place Saturday, May 12 at Turning Stone Resort Casino in Verona, New York and will be televised live on HBO World Championship Boxing beginning at 10:00 p.m. ET/PT.