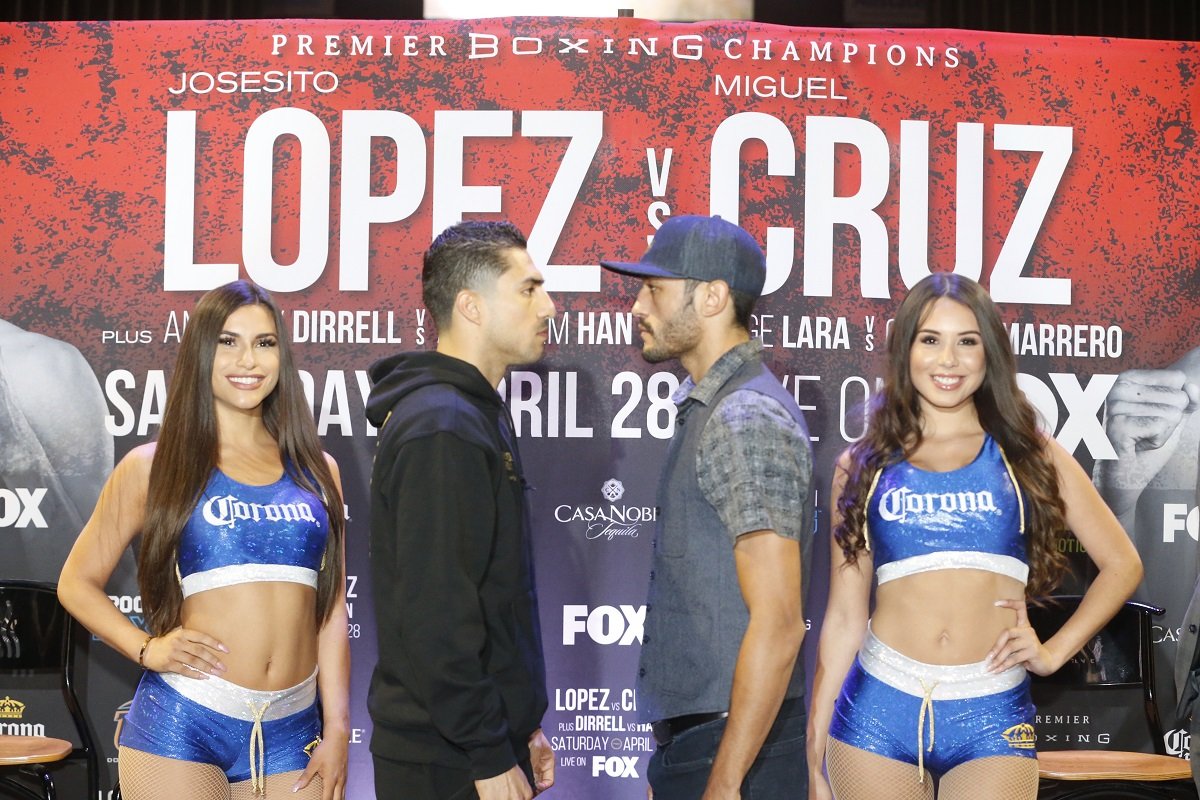 Also squaring-off Thursday and competing in PBC on FOX and FOX Deportes action that begins at 8:30 p.m. ET/5:30 p.m. PT were former world champion Anthony Dirrell and El Paso’s Abraham Han, who meet in a 10 round super middleweight clash, and featherweight brawlers Jorge Lara and Claudio Marrero, who compete in a 10 round fight.

Tickets for the show, which is promoted by TGB Promotions, are on sale now and can be purchased through Ticketmaster.

It is a Must-Win for Bryan Vera Against Kendrick Ball Jr. on April 17th

Here is what the fighters had to say Thursday from Don Haskins Center:

“I’m well prepared for this fight, I’ve had a great camp with Robert Garcia. I have a tough unbeaten opponent who’s really good. I just have to prove I’m better on Saturday night.

“I’m so excited to be finally fighting in Texas and I’ve gotten so much love and support already from this city. I can’t wait to give these fans a show.

“This is the kind of fight that I can really display my skills. I’m going to show everyone the same heart that I always do, combined with some skills that Robert Garcia has helped get.

“I’m going to be prepared for anything on Saturday. Cruz is unbeaten and that brings its own kind of mentality. I know I have what it takes to conquer this challenge and fight the best in the division.

“This is going to be a textbook Josesito Lopez performance. I’m going to fight my hardest from bell to bell and take this victory home with me.”

“El Paso has been great to me and I’ve really enjoyed my time here. I’m in this city to fight. I’m here to come and prove myself in this welterweight division.

“I have respect for what Josesito’s done in the game, but at the end of the day, this is the premier division in boxing. I feel I’m one of the best guys at 147 and I’ll be here for a while. I’m going to be a force.

“I know Josesito is bringing the fight and I promise you I’m bringing it as well. I will come out on top. This is a can’t miss fight for sure.

“I have to be smart and execute my game plan round after round. My jab will be key and if I can use that and wear him down to the body, I think I’ll have a great chance to stop him.

“I know what it takes to win at this level now. I’ve gotten better each fight and I think my time is now. People are going to know my name after Saturday night.”

“I plan on going in there and getting the victory. I know Han is a great fighter who will bring the best out of me. That’s what I need right now.

“Come Saturday it’s going to be just another fight for me. I take everybody seriously. I know that anything can happen in that ring. I prepared well for this fight and I’m ready to get the win.

“Everyone knows that I’m a championship-caliber fighter and I’ll prove it again on Saturday. After this fight, I’m ready to take on any of the super middleweight champions. I’ll beat any of them.

“I’m the best fighter that he’s ever going to fight and he will see that on Saturday. I’m going to leave no doubt.”

“I’ve fought in many other people’s backyards so being able to fight here in my hometown is amazing. I turn it up to a different level here. The crowd will give me a big boost in energy and it’s going to help me get the win.

“I hope the sports fans of El Paso come out and watch me put on a great performance. I know the type of challenge I have in front of me, but I also know that I have the skills to pull this off.

“This is a great opportunity to show people outside of El Paso what kind of fighter I really am. I have a lot of experience and I’ve fought all over, but I don’t know if I’ve ever been more prepared for a fight.

“Anthony Dirrell is a great champion but I’m a champion of this city. This is my chance to take down a big name and move to the next level of the sport.”

“I’m going to leave the ring Saturday night with my hand raised. I’ve had a wonderful training camp and I prepared perfectly for this fight. It will show on fight night.

“Marrero better be ready, because I’m going to come at him and look for the kill early. I want to make a statement and I’ll go through him to make it.

“I’m very focused and ready to take home this win on Saturday night. The fans are going to love my style and the heart that I fight with.”

“I hope that Jorge Lara is ready to fight on Saturday night. This is going to be a battle and I know that we’ll both leave everything in the ring.

“I prepared well for this fight because I know that everything is on the line for me. I have to be victorious so I can go on and get where I want to in boxing.

“I’m more skilled and more experienced than anyone that Lara has faced and on Saturday night I’m going to give him lots of problems.”