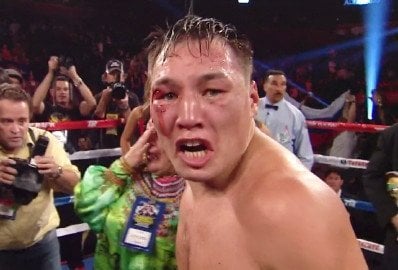 Showtime yesterday announced a string of upcoming fights set for the summer and one of these match-ups caught the eye of any discerning fan of a slugfest: the June 11th Ruslan Provodnikov-John Molina Junior clash. Provodnikov – who will be making his Showtime network TV debut – against Molina Junior will surely feature plenty of drama, for however long the light-welterweight shootout lasts.

Provodnikov, the kind of fighter who, as the saying goes, gets insulted if a guy misses him with a punch, is never in a bad fight. Since his modern day classic with Tim Bradley, the 32-year-old Russian hard man has fought five times, winning three and losing two. Provodnikov beat Mike Alvarado in another action bout, then lost to Chris Algieri on points, before coming back to blast out the remnants of Jose Luis Castilo, before losing a war against Lucas Matthysse in April of last year. Since then, Provodnikov has won once, stopping an unbeaten Jesus Rodriguez back in November.

How much has Provodnikov got left? The Russian is aiming to become a world ruler once again, but the former WBO 140-pound boss has taken more than his share of punishment in a tough career. Provodnikov has given out more or less as much as he has taken, but the slugger doesn’t look like the kind of fighter who will have a long career. Against Molina Junior, 28-6(23), a warrior who has also given fans plenty of thrills, Provodnikov can be expected to go to war once more.

Molina Junior is the older man by a year and he has also had a rough run in his last four fights. Most well known for his all-out barnburner with common opponent Matthysse – a fight where both punchers hit the mat before Matthysse finally got the stoppage win in the 11th-round – Molina Junior would lose his next two outings, dropping decision to Humberto Soto and Adrien Broner. But also like the man he will trade leather with in June, Molina Junior is coming off a November win; a stoppage win over a 24-9 Jorge Romero.

The June battle may come down to who has the most left, Provodnikov or Molina. The real winners will likely be the fans who tune in. It is a concern sometimes, how much punishment fighters like these two take in the name of entertainment, and the long-term health of both men is also a worry. But nobody can tell rough, authentically tough fighting men like Provodnikov or Molina what to do. And fight and fight hard is what they do best.

June 11th’s fight will not be for the squeamish