This is one of those fights that are difficult to predict because Chocolatito is up there in age, but he’s still very skilled and capable of throwing a lot of shots.

Martinez has the youth and power on his side, but he’s never mixed it up with anyone near as good as Chocolatito.

The flaws that Martinez showed in his fights with Jay Harris, McWilliams Arroyo, and Christofer Rosales could be taken advantage of by Chocolatito.

Chocolatito, 34, had been scheduled to fight Juan Francisco Estrada, but he pulled out because of a slow recovery from a COVID-19 illness.

Luckily, Matchroom Boxing promoter Eddie Hearn was able to get WBC flyweight champion Rey Martinez, 27, to move up in weight to take the fight with the legendary Chocolatito in the main event.

“I’m very happy to return after those fights against Sor Rungvisai,” said Roman ‘Chocolatito’ Gonzalez on Thursday’s media workout. “I feel good, I feel motivated, and I’m hoping to walk away with my hand in victory this Saturday.

“I’ve done a lot of work on my body, and I know in due time, it’s a decision I’m going to have to make,” Chocolatito said about him needing to retire at some point.

“In the meantime, we’re really strong, and we have the desire and the thirst to do a few more fights. Right now, there are some guys from the smaller divisions that are really good and moving up.

“As you know, I’m fighting against Rey Martinez, a very good fighter and a champion at 112 lbs. We’re going to do a great fight. We’re very motivated because we know it’s not an easy fight.

“I want to enjoy the entire public to join us on March 5th for this fight,” said Chocolatito.

“I’m happy and motivated that I’m going against a great legend,” said Rey Martinez about his happiness in taking on Chocolatito this Saturday.

“I’ve been following him. He’s one of those fighters that have really elevated the status of the smaller weight classes. I’m very happy and motivated to be fighting a great legend Roman.

“Motivated and hunger to be fighting against the best and becoming the best at super flyweight and flyweight, that’s what is motivating us,” said Martinez.

“We’re ready for what comes, and I want to make sure I’m the best at flyweight and then super flyweight.

“This opportunity came, and we welcomed it with open arms, but we want to make sure we’re the best in our division first,” said Rey Martinez in making it clear that he wants to return to the 112-lb division after he faces Roman Gonzalez on Saturday.

“This is the start of the beginning, and we’ll come in with everything but fear, and we’re ready for it,” said Martinez.

Hearn amped up for Chocolatito vs. Martinez

“For me, the best fight I’ve seen live is Estrada vs. Chocolatito 2,” said Eddie Hearn to Fighthype. “I’m more excited about Chocolatito – Martinez than I was for Estrada – Chocolatito 3. Julio Cesar Martinez is a crazy mother f*****,” and anything can happen in that fight.

“Julio Cesar Martinez could knockout Chocolatito in one round. It could be a war, and Martinez gets stopped late in the fight. He could get outboxed.

“Anything could happen in that fight, and it’s another example of the smaller weights where you have six weeks to go where you have Chocolatito, and you’ve got Martinez that is so dangerous.

“I texted Eddy Reynoso, and I said, ‘I know it’s a long shot, but will Julio Cesar Martinez take a fight against Chocolatito?’ He came straight back, ‘My crazy man is ready.’ And then Chocolatito, same thing, ‘No problem,'” said Hearn.

It’s excellent that Hearn was able to get Rey Martinez to step up and take the fight with Chocolatito on short notice. We can only hope that Martinez has gotten enough training time to prepare for the battle. 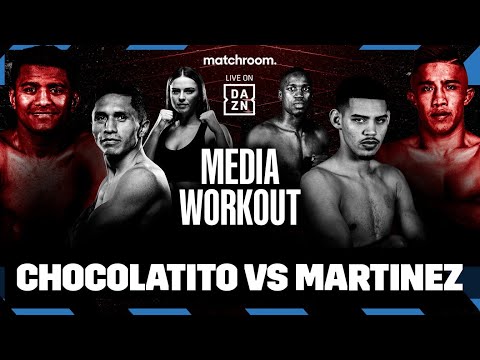