Eddie Hearn has already picked out two options for Canelo Alvarez’s third fight of his three-fight, $160 million deal with Matchroom Boxing & DAZN for this year.

The third fight for Canelo in 2023 on DAZN will be against either his WBA 168-lb mandatory challenger John Ryder or WBC cruiserweight champion Ilunga Makabu.

Hearn didn’t say whether Makabu and Ryder were choices made by Canelo’s manager Eddy Reynoso, but that would seem likely to be the case.

Reynoso came up with the idea for Canelo to move up to cruiserweight to challenge WBC champion Makabu. Unfortunately, it appears Reynoso hasn’t given up on the concept of matching Canelo against Makabu.

Canelo has become almost obsessed with fighting for world titles but failing to recognize that the champions he’s fighting are guys that casual boxing fans have never heard of and don’t care about.

If Canelo wanted to do fans a favor, he’d forget about fighting Makabu or Ryder, and instead face David Benavidez in December.

Hearn will likely campaign to have Ryder be the one that Canelo faces, as he’s from the UK, and it would allow the Mexican star to fight over there for the first time in his career.

“It’s John Ryder in London, which will probably be his mandatory or maybe Makabu in Guadalajara,” said Eddie Hearn to Fighthype in revealing the third-fight option for Canelo in December.

“Can you imagine Canelo Alvarez in Guadalajara? Part of me would love to bring him to the UK, but also to bring Canelo to Guadalajara and to see that spectacle. That would be something for me, and that’s maybe even over London. To see that with your own eyes would be incredible,” said Hearn.

Ryder (31-5, 17 KOs) recently beat Daniel Jacobs by a 12 round split decision on February 12th in London. That was an exciting comeback fight for Ryder in defeating the former IBF/WBA middleweight champion in a competitive contest.

“The thing about Canelo and Golovkin is they cannot stand each other,” said Hearn when asked if Alvarez wanted the third fight with Gennady. “Gennady feels he won the first two fights.

“That fight, if Canelo wins, if Golovkin wins against Murata, that fight is going to be absolutely huge because when we get those two together, and we start talking, and we start debating the first two fights, that’s going to be an absolute war, but they’ve got to win their fights,” said Hearn.

Canelo vs. Golovkin III should be interesting, and hopefully, this match won’t end in controversy like their previous two. Canelo and Hearn should place the fight with Golovkin in a neutral venue in California or New York rather than staging it in Las Vegas, where the two fighters have fought in the past.

“We had three approaches internationally to stage this fight [Canelo vs. Bivol], and we decided that Las Vegas on Cinco de Mayo is where we wanted to do this fight. I want to fight him internationally where I can.

“We have got nine weeks, and we had a lot of different approaches, and we needed to make a move. I have never promoted a Canelo in Las Vegas, myself personally as the lead promoter.

“So there was a part of me that wanted to do the grand arrivals and do something a little bit different and change the way boxing is promoted in Las Vegas that weekend. I’m going to try many different things and freshen it up.

“I said to Canelo earlier, “You are the easiest person I’ve ever worked with.’ In fact, my two easiest clients are Canelo Alvarez and Anthony Joshua, and they’re the two biggest stars in the sport.

“There’s so much to be said in life about keeping things simple. Canelo Alvarez is a great example of that. You only got to go down to his gym. It’s not a science lab. It’s just a gym with him and Eddy and a tight group of people.

“‘Who do you want to fight next?’ ‘I don’t know. Speak to Eddy.’ You have to understand that his guy trains in the morning and finishes in the gym. He puts his golf stuff on in the gym and goes and plays 18 holes, and then drives home and finishes his evening workout,” said Hearn. 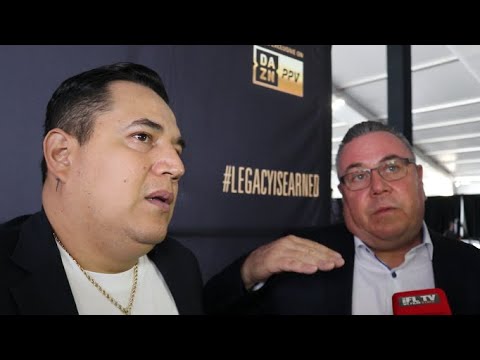