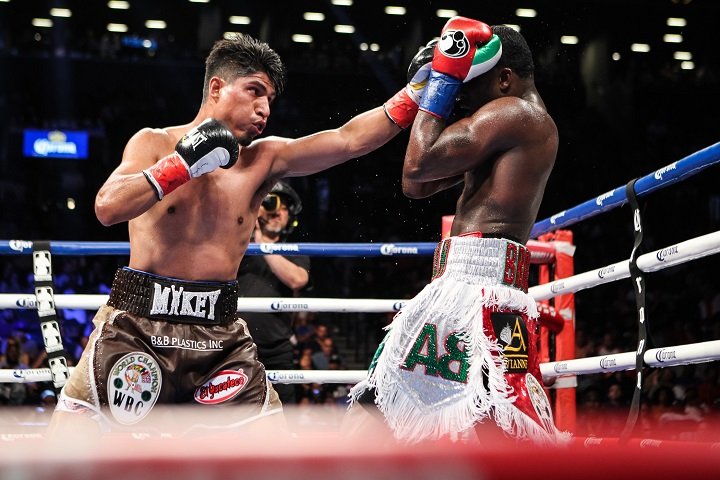 Mikey Garcia (37-0, 30 KOs) arguably finished off the career of Adrien “The Problem” Broner (33-3, 24 KOs) in beating him by a lopsided 12 round unanimous decision to win the WBC Diamond light welterweight title on Saturday night at the Barclays Center in Brooklyn, New York.

Fighting in front of a large crowd of 12,084 boxing fans, Garcia calmly and methodically walked down Broner and won a fairly easy decision. The judges’ score were far too generous to Broner. The scores were 117-111, 116-112 and 116-112. At the most, Broner deserved 2 rounds. Even giving Broner one round was hard to justify, as he mainly just jabbed. The 10th was Broner’s best round, but he was hit with far more powerful shots than the tiny handful of punches that he landed on Garcia.

Broner started to press Mikey and walk him down at times in the last 4 rounds of the contest, but he still didn’t do much other than jab. Mikey did look like he was tiring in rounds 9 through 12. Broner was unable to apply enough pressure to test Garcia’s stamina.

It wouldn’t have mattered even if Broner did put more heat on Garcia, because he didn’t have the snap on his shots like the Broner of old. It was obvious that Broner left his best behind in training camp in melting off all the pounds that he’d put on. At the start of training camp, Broner looked huge, as big as a house. He must have taken off at least 30 pounds during camp. Obviously, it was too much for Broner to take off, because he looked like he’d lost a considerable amount of muscle weight from his last fight against Adrian Granados.

Broner played it safe for most of the fight. He wasn’t willing to let his hands go for fear of being countered by Garcia, who is at his best when he’s landing counter punches. Broner wasn’t going to give Garcia any chances to do that, so he chose to jab. Broner’s jabs weren’t effective enough for him to win rounds unfortunately. Garcia made it a point to land some nice shots in each and every round to make the judges’ jobs a lot easier in scoring the fight.

Broner has swelling underneath his right eye in the later rounds. Broner wasn’t getting hit a lot from Garcia, but it didn’t matter.

Garcia wasn’t taking a lot of risks himself in the first 6 rounds. He looked cautious, and hesitant to let his hands go. Garcia had obviously studied a lot of Broner’s past fights in researching how to fight him. But the Broner we saw tonight was too weak and frail looking to put up much of a fight. I think Broner lost the fight in making weight. He came in at 138 lbs. on Friday for the weight-in, which was 2 pounds under the 140 contract limit for the fight.

Broner might have been worried about the $500,000 weight penalty that was part of the contract. It was his mistake in agreeing to that weight penalty. Any chance that Broner had of winning went out the window with him coming in so light. We don’t know how much weight Broner lost during training camp. It must have been a lot. Broner looked like he didn’t rehydrate fully, He was too thin compared to how he’s looked during fight night in the past. Broner looked like he not only lost fat during training camp, but also quite a bit of muscle as well. For a fighter that has fought at 140 numerous times, it was strange to see how Broner could mess it up so badly for this fight by coming in too light. Broner looked the same way Julio Cesar Chavez Jr. in his recent fight against Saul Canelo Alvarez. Chavez Jr. was badly weight drained for that fight. He was too weak to fight.
It might be a good time for Broner to retire from boxing. This fight showed that Broner is not going to be relevant at 140. There’s nowhere for Broner to go at this point.

I wasn’t impressed with Mikey. He fought a boring fight, and he didn’t show me that he would beat the top guys in the 140 lb. division. Mikey is not going to be able to beat the top dog in the light welterweight division in Terence Crawford. Mikey should at least try and fight the winner of the Terence Crawford vs. Julius Indongo fight. Mikey will likely steer clear of either of those guys, and instead move back down to lightweight where he can defend his WBC title. The paydays aren’t going to be huge for Mikey at lightweight, but he at least dominates that division. Mikey would not dominate the 140 lb. division. I’m sorry, but he wouldn’t beat Crawford or Indongo. Mikey also doesn’t hit harder than Marcos Maidana or the top middleweights like his trainer Robert Garcia was saying. That’s dream stuff on Robert’s part. If Mikey stayed at light welterweight, he’d have to change the way he fights. If he tries to walk down Crawford, he’ll get schooled. Indongo would jab him all night and win an easy decision. Mikey did well against a weight drained Broner, but I don’t see him beating guys that are natural for the division and not battling the weight.