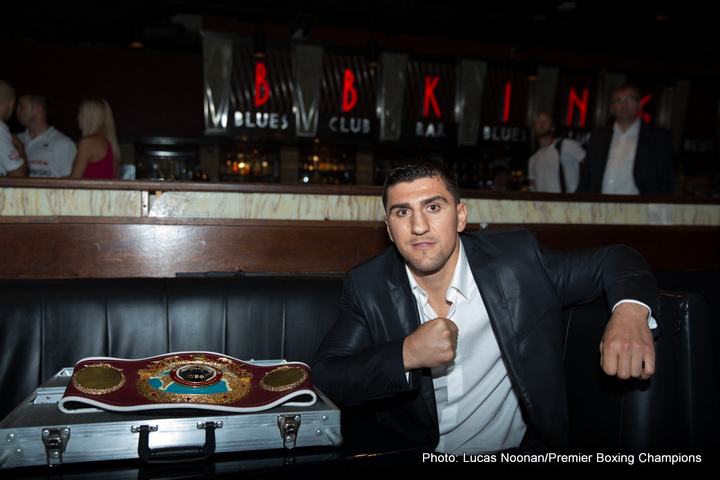 IBO cruiserweight champion Marco Huck (40-3-1, 27 KOs) defeated Dmytro Kucher (24-2-1, 18 KOs) by a tougher than expected 12 round unanimous decision on Saturday night in front of a large crowd of Huck supporters at the TUI Arena in Hanover, Germany. Huck took a lot of shots in the process of winning the fight against the 32-year-old Kucher, but he did more than enough to get the decision. Despite winning, Huck looked pretty shot and over-the-hill to me. Huck was always a badly flawed fighter from the get go, but he looked just awful tonight. I think age and the negative effects of ring wear is starting to rear its ugly head with Huck. If I’m Huck’s management, I’m thinking cash out right about now.

The scores were 117-111, 119-109, 117-111. Boxing 247 scored the fight 10 rounds to 2 in favor of Huck. Many of the rounds were decided by flurries by Huck. He would do little for long spells, and then suddenly come to life with flurries to steal the rounds. As the fight wore on, those flurries from Huck became infrequent, as he tired out from the pressure that was being put on him by the big Ukrainian Kucher.

It wasn’t that Kucher was throwing a lot of punches. Huck seemed to tire from always having Kucher in front of him looking to nail him with left hands and right hooks. Kucher, who normally fights out of the orthodox stance, fought southpaw for long stretches. It’s unclear if this helped him or not. Huck likely would have won the fight if Kucher had fought out of the orthodox stance, because he wasn’t letting his hands go enough to give himself a reach chance to win the fight.

Huck hurt Kucher in round eight with a series of right hands. Huck when Huck tried to finish Kucher off, he smothered his own work by standing in too close and not nailing him with hard enough shots to put him away. Out of frustration, Huck threw Kucher to the canvas and then stood over him, as if he was contemplating hitting him while he was down.

Kucher didn’t have the hand speed or enough power to really trouble Huck like he’d been in his 11th round knockout loss to Krzysztof Glowacki in 2015. However, Kucher did show that Huck is not the same fighter he once was. That was pretty clear from tonight’s fight. Huck’s management needs to try and make whatever fights they can with him, because he doesn’t look like he’s going to be a factor in the cruiserweight division for too much longer. I think Huck will be okay as long as he’s matched against big slow guys like Kucher, but if he’s put in the ring with someone like Oleksandr Usyk or Glowacki, bad things are going to happen to him.

At this point, I don’t think Huck could hang with Denis Lebedev or Murat Gassiev. I know Huck has an UGLY controversial decision win over Lebedev from 2010 in which many boxing fans thought Huck lost, but in a rematch, I see Huck getting obliterated. It probably won’t matter though, because Lebedev is likely going to lose his WBA title next month to Gassiev on December 3. I just hope Huck’s management doesn’t get any big ideas of throwing him inside the ring with Gassiev, because I think he’ll end up getting knocked cold by the hard hitting Russian if he takes that fight. With all those shots that Kucher was landing on the chin of Huck tonight, Gassiev would have likely flattened Huck early if he was the one landing those same shots. I’m just saying. Huck needs to stay FAR, FAR away from Gassiev, period.

Other boxing action on tonight’s card in Hanover, Germany: