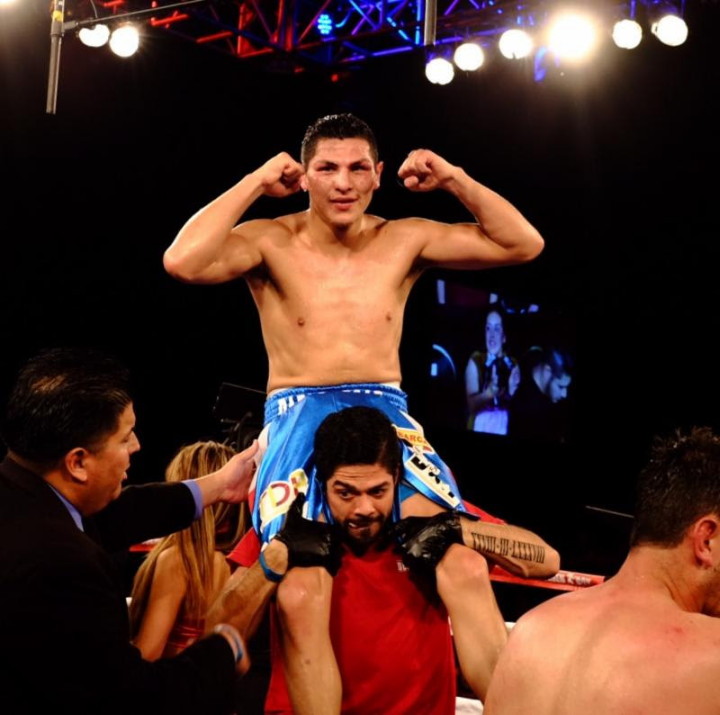 In a back-and-forth brawl where Cano had two points deducted for low blows, Cano secured the victory with two judges giving him the nod 97-91, while a third judge scored the bout 95-93 for Herrera.

“He had a distinct style that I had to adjust to,” Cano said. “I am satisfied with the result, and this is exactly what we wanted to get the next big fight. My team has been training for years, and we have come together cohesively to pull off this fight.”

“Cano had a length that we were not expecting,” Herrera said. “We had similar fighting styles, and we have a similar career trajectory. I could have done more to get in and break him down, but his reach really prevented me from doing that. He’s a great fighter, and I wish him the best.”

In the co-main event, KeAndre “The Truth” Gibson (16-0-1, 7 KOs)of Las Vegas faced a massive test against seasoned ring veteran Mahroni “Ruso Jr.” Montes (30-6-1, 21 KOs) of Los Mochis, Mexico in an eight-round welterweight battle that went the distance. The fighters came forward aggressively in the ring, both seeking opportunities to break through their opponents. In the second round, Gibson lost a point for a low blow. The resilient Montes was able to bounce back, with an incredible inside game and head movement that gave Gibson trouble, however Gibson’s speed and impactful power punches proved to be too much for Montes. The judges scored the bout 77-74, 78-73, and 79-72, handing Gibson the win via unanimous decision.

“I’ve fought a lot of Mexican fighters in my career, but Montes was the toughest I have faced by far,” Gibson said. “I had to adjust to his head movement, and his way to maneuver through the ring. I felt like my hands were a lot looser, and I felt that my speed with my combinations were doing the work to break him down.”

“It was cool to fight this time around with someone who is from my hometown backwoods in Louisiana,” said Fitch. “I would have come forward as much as I did in my last couple of rounds compared to when I started and I wish I could have had more rounds to fight. Nonetheless, we got what we needed, which was this win.”

Closing out the Ring TV portion of the night with a scheduled six-round battle, Oscar Duarte (8-0-1, 4 KOs)from Parral, Mexico battled fellow Chihuahuan Rony Alvarado (9-9, 5 KOs). The heavy-hitting Duarte was able to cause serious damage to Alvarado by effectively landing his power punches, leading to the stoppage in the fourth round where a tough body punch caused Alvarado to fall and forced the referee to call the fight. The undefeated Duarte took home the victory via technical knockout.

“We always train for the fight to go all the scheduled rounds, and when we get the job done early, that’s just a testament of the work we put in,” spoke an elated Duarte of his knockout. “I think that inner rivalry of being from the same state in Mexico gave me a little more ammo to hurt him, and add the fact that my manager Gabriel Soto was here to support me-I just couldn’t be happier about this win.”

Red-hot prospect Cesar Diaz (3-0, 3 KOs) of Palmdale, California dueled in a super bantamweight fight against Tabasco, Mexico’s Jose Naranjo (3-5-1, 1 KO) for two out of the four scheduled rounds. Diaz was able to land a body punch that hurt Naranjo at the beginning of the second round, finishing the job with a right hook, ending the fight at the end of the round. Diaz maintained his undefeated status, taking the victory via technical knockout.

“It’s just another step up,” said Cesar Diaz. “My corner pushed me to keep my head in there, and to land my jabs with confidence. When they told me I hurt him, my instinct told me to throw the hook, and that got us the win.”

Joshua “The Professor” Franco (8-0, 4 KOs) of San Antonio, Texas went the distance with rugged Nogales, Mexico’s Felipe Rivas (19-17-4, 12 KOs) in a six-round bantamweight brawl. Both fighters were resilient, withstanding the tough exchanges. Mid-fight, Rivas couldn’t take the heat, hitting the mat at the third round. The resilient Rivas was able to bounce back and make it through the rest of the bout. All the judges scored the bout unanimously at 60-54, with Franco gaining the hard-fought victory.

“Even though he was taunting me throughout the fight, it didn’t bother me,” Franco said. “He’s a veteran, and he has his little tricks to move in and out of the ring. Despite that, I was able to dominate, and get the victory.”

Marvin Cabrera (2-0, 2 KOs) of Los Angeles, California dominated Atlanta, Georgia’s Steven Andrade (2-2, 1 KO) in a four-round middleweight fight, in which he sent Andrade to the mat twice in the second round. Andrade’s corner threw in the towel before the third round commenced, giving Cabrera the victory via technical knockout.

“This is my second win, and I am thrilled that it is another knock out,” spoke Marvin Cabrera of his victory. “My opponent was looking for opportunities to hurt me, but I knew my body punches were doing their work, and I was able to finish the fight early.”