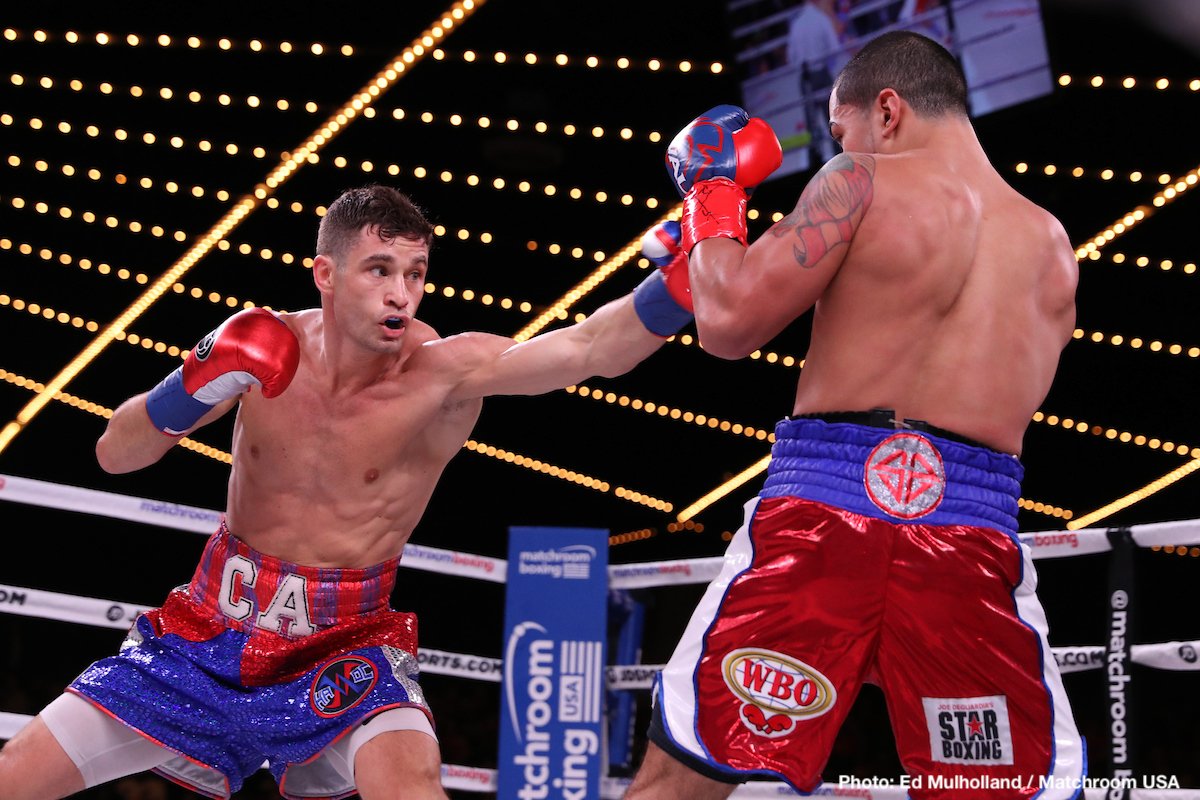 The fight was shown on DAZN. Algieri, 34, was cut under his left eye from a head-butt in round 4, and then had to box and move the remainder of the way to keep the cut from forcing a stoppage.

The scores were 98-92, 97-93, and 96-94. You can argue that the most accurate score of that bunch was the 96-94 score. Algieri looked like he did just enough to get the decision. It was Algieri’s strong start in the first five rounds that kept him from losing. Algieri looked impressive in through five, but he steadily wore down from rounds 6 through 10. By the 9th, Algieri looked exhausted, and had nothing.

Algieri’s trainer lectured him in the corner in between rounds, telling him to stop backing up, but he had no choice. Gonzalez had a lot more energy in the last five rounds, and he was able to cut off the ring and land his shots no matter how much circular movement Algieri used. One thing is for sure, Algieri couldn’t stand his ground without clinching nonstop, because he was getting worked over by the stronger, younger 29-year-old Gonzalez.

Depending on how long it takes for the 34-year-old Algieri’s cut to head under his left eye, he could be back in the next four to five months to challenge World Boxing Organization light welterweight champion Maurice Hooker for his title. Algieri will need to be to be in better shape against Hooker. That guy is a much better fighter than Gonzalez, and Algieri had all he could handle by him tonight.

The booing from the boxing fans after the fight was persistent and seemingly without letup until Algieri left the ring. The fans wanted to let him and the judges know how unhappy they were with the results of the fight.

“My performance wasn’t my best,” Algieri said afterwards. “I felt a little off. I got to take care of my eye. It wasn’t so much that I was tired. My eye was getting worse and worse. I think I can come back in a short period of time. I need a longer camp. I want a full eight week camp. As long as I can have a proper camp, I can turn it up when I need it.”

Algieri needs more tuneup fights for him to prepare for a world title shot.

Amanda Serrano (36-1-1, 27 KOs) made easy work of Eva Voraberger (24-6, 11 KOs) in stopping her in the first round to win the WBO Female super flyweight title. Serrrano is now a seven division world champion. She’s doing in women’s boxing what Manny Pacquiao did in men’s boxing in capturing division titles with ease. The way Serrano fought tonight, he’s capable of moving up to flyweight to capture another division world title.