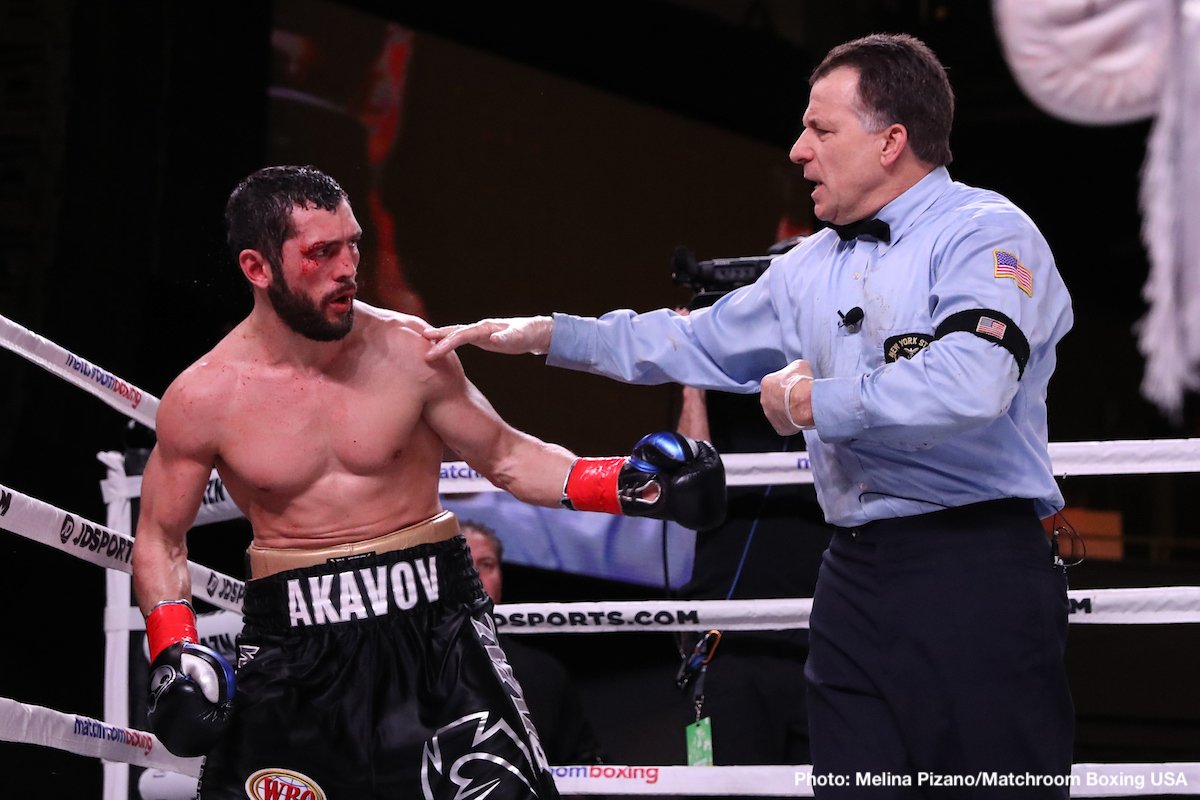 WBO middleweight champion Demetrius “Boo Boo” Andrade (27-0, 17 KOs) took care of business in beating hopelessly over matched Artur Akavov (19-3, 8 KOs) in winning a premature 12th round knockout on Friday night on DAZN at Madison Square Garden in New York City. It was a good win for Andrade, and it keeps him moving forward for the big fights against Saul Canelo Alvarez, Gennady Golovkin and Daniel Jacobs.

Andrade was in full command of the fight in the 12th round when the referee Arthur Mercante Jr. waived off the bout after Akavov had been hit a few times. The crowd didn’t like the stoppage, and they let referee know about it. Akavov was also not happy about being stopped on his feet.

Mercante Jr. saw something in Akavov’s face that made him stop the bout. The stoppage was questionable, but Akavov wasn’t doing anything to try and win the fight. The referee did him a favor by stopping it, and he tried to let him know that but he wasn’t interested in listening to him. Akavov was dealing with a cut over his right eye that as a problem for him. The biggest problem that Akavov had was he didn’t throw punches.

Each round was identical for the most part. Andrade would land jabs by the dozens, and connect with body shots, and left hands to the head. Akavov would take the shots, and move away. Other than rounds three and nine, Akavov threw almost no punches in the last nine rounds.

Akavov’s trainer would have done him a big favor if he had pulled him out at some point early when it became clear that he wasn’t trying to win the fight. He was just looking to go the distance. It was pointless for a title challenger to waste his opportunity by not throwing punches, but that’s what Akavov was doing.

The referee Mercante Jr. seemed to understand this, and he did him a favor by stopping it in the 12th. Akavov was obviously too caught up in the fight to understand that it was a hopeless situation for him. There was only 24 seconds left in the fight, and he wasn’t throwing punches at all. He was just trying not to get hit. The referee did the wise thing in stopping it.

“I felt good,” Andrade said. “I’m looking to get in with the best. The jab was working beautifully. At the end of the day, if you put GGG [Gennady Golovkin] in front of me, I’m going to destroy him. I’d pick him apart. It’s a fight,” Andrade said in explaining what happened when he was hurt in the ninth round by Akavov. “I’m going to keep beating the top 15. Eventually, Canelo and GGG will be the only ones left. I’m not interested in Billy Joe Saunders. He’s unprofessional. You heard who I called out [Canelo and GGG],” Andrade said.

Maybe Golovkin will listen to Andrade, and sign with DAZN so that he can fight him, and possibly Saul Canelo Alvarez and Danny Jacobs. But if Golovkin loses to Andrade, then he can forget about a trilogy fight against Canelo or a rematch against Jacobs. A loss to Andrade would pretty much spell the end of GGG’s career, especially if he lost the way that Akavov did.