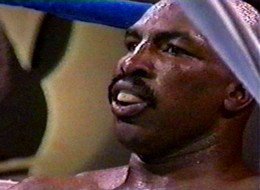 The names have been announced for this year’s Las Vegas Boxing Hall Of Fame; with greats including “Sugar” Shane Mosley, Kevin Kelley, Laila Ali and Earnie Shavers set to be enshrined in the month of August. There are a number of legends set to be posthumously inducted; including Aaron Pryor and Henry Armstrong, along with trainer Bill Miller (the man the great James Toney says is THE finest boxing trainer who ever lived).

But it is the name of heavyweight monster puncher Shavers that has captured the eye of many fight fans. Shavers, an incredible 74-14(68) never managed to capture the world title, this despite his coming close on two occasions. Shavers famously decked Larry Holmes in a 1979 challenge, the shot he cracked Holmes with putting the defending WBC champ down. Hard. Veteran fight scribe Jerry Izenberg says, years later, how he thought, “he’s killed him!” when Shavers laid Holmes out. But Larry, showing almost unimaginable recuperative powers, got back up. Somehow.

In his 1977 battle with world champ Muhammad Ali, Shavers rocked and socked The Greatest hard and often, with only Ali’s phenomenal chin allowing him to survive to the final bell, winning a close decision.

But what about Earnie’s victories? Shavers scored three hugely impressive KO wins during his prime: despatching two former heavyweight champions Jimmy Ellis and Ken Norton inside a round, Ellis in 1973, Norton in 1979. While Shavers also managed to halt the crafty, seldom stopped Jimmy Young, inside three rounds in 1973.

Other Shavers highlights include his simply astonishing battle with Roy “Tiger” Williams; this fight being one that, had it been choreographed for a ‘Rocky’ movie, would have been rejected for being far too unrealistic! (seriously, check it out on You Tube, now). Shavers dug deep to finally halt Williams in the tenth-round of an epic slugfest. Shavers also beat useful fighters like Henry Clark (twice, once by quick KO, once via decision), Leroy Boone, Jeff Simms and an admittedly faded yet still rarely stopped Joe Bugner; Shavers halting him two.