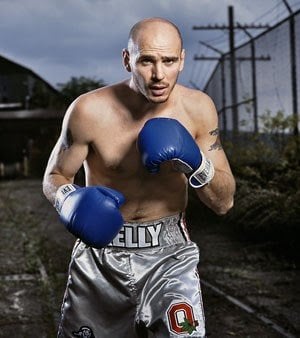 A decade ago, Kelly Pavlik was the undefeated middleweight champion of the world – and seemingly set for greatness. An incredibly heavy-handed warrior with a fierce fighting heart, a solid amateur background and a trusted team behind him, “The Ghost” as Pavlik was known (the nickname given to him when, as an amateur, he was so hard to hit), changed his style considerably in the pro ranks.

Very much a gutsy slugger who would look to push an opponent back, overpower them – having to take what came back at him in the process – and ultimately go home with a fan-pleasing KO victory, Pavlik was one of the best. And Pavlik, with his ever-growing fan base, often provided great, great excitement. Then, just as he seemed to be reaching his absolute peak – both in terms of fame and of fighting prowess – it all went wrong for the Youngstown hero. One bad career move – that of taking on the crafty, tricky and special Bernard Hopkins up well above the middleweight limit – saw Pavlik lose his mojo in a major way.

Pavlik never truly recovered from the wide decision loss he fell victim to at the hands of B-Hop and his wizardry, even though Pavlik did fight on, as world middleweight ruler, for some months. In his relatively short prime, Pavlik really did look to be on his way to greatness though.

Who can forget the give and take battle a pre-title winning Pavlik had with the then unbeaten Edison Miranda? The May 2007 win saw “The Ghost” – then aged 25 and, as it turned out, in his never-to-be-better, prime – earn a shot at another unbeaten fighter: the middleweight champion of the world, Jermain Taylor. If Pavlik, a punishing puncher who had a great left jab, a reliable chin and a fine engine, wasn’t at his best against Miranda, he sure was against Taylor.

Before the September 2007 clash, legendary trainer Emanuel Steward, then working with Taylor, predicted a relatively straightforward, quick win for his fighter. Steward was almost proved correct, as Taylor lived up to his “Bad Intentions” ring moniker and scored a heavy second-round knockdown. But Pavlik, showing the bite-down courage he would soon become world famous for, fought back hard against the man who had previously beaten him as an amateur, eventually trapping Taylor in a corner and battering him into helplessness in the seventh-round of a classic fight.

Now the middleweight king and, as promoter Bob Arum was predicting, looking like the next superstar of the sport, Pavlik was instead soon to begin his downward spiral. After a repeat win over Taylor (a points win fought above the 160 pound limit), Pavlik agreed to fight Hopkins in yet another catch-weight affair. Big mistake. A heavy points loss later, and Pavlik, the critics were quick to declare, had been “ruined.”

It was a humbling defeat for Pavlik, yet on the bright side, he was still the middleweight ruler. Retentions of his belts came against Marco Antonio Rubio and Miguel Angel Espinosa (both stoppage wins), before Pavlik went twelve hard, bloody rounds with Sergio Martinez in April of 2010. At the time, the reasonably close 12 round unanimous decision loss let a lot of Pavlik fans down, also further inspiring the critics to write his obituary, but in hindsight Pavlik’s performance, hampered as it was a by a nasty cut to the eye, was far from poor. Martinez, of course, would go on to become a Pound-for-Pound star and, according to some experts, was himself one of the best middleweights in history.

Then came Pavlik’s well-documented battle with alcohol, resulting in a stay in rehab – before a comeback in May of 2011 saw the former champ real off four useful, rust-removing wins up at super-middleweight. Now clean and sober and, more importantly, as hungry as ever with new trainer Robert Garcia (having split with long-time coach Jack Leow), Pavlik was linked to big fights with the likes of Lucian Bute, Carl Froch and Ward. For one reason or another, however, neither intriguing match-up came off.

Who knows for how long Pavlik could/would have dominated had he not had that bad night against Hopkins (also remember how Pavlik suffered an elbow injury prior to the loss, an injury he could easily have decided necessitated his withdrawal from the bout). Also, nobody knows how well Pavlik would have done in big fights against Bute, Froch and Ward. Maybe, had he landed the fight with Bute, it would have been Pavlik who revitalised his career with a stunning stoppage over the Romanian, and not Froch. While a Pavlik-Froch fight would almost certainly have been a thriller – and one that could have gone either way.

Ultimately, Pavlik will not be remembered as a great fighter. But he sure came close. How exciting would it be if the Pavlik of ten years ago were around today, rumbling with the likes of Gennady Golovkin and Canelo Alvarez. I’m not sure about you, but I think the Pavlik who crushed Miranda and Taylor would have given GGG and Canelo sheer hell.