…And A Genuine “How The Hell Did He Get Back Up!” Moment!

The great Earnie Shavers recently passed away, this at the age of 78. One of the hardest-hitting (see lethal) heavyweights in all of boxing history, Shavers also ranks as one of the best big men never to have won a world title. But how close Earnie came, on two occasions. Fighting during a golden era, when giants Muhammad Ali, George Foreman, Joe Frazier and others were at the top of their game, Shavers never had things easy. 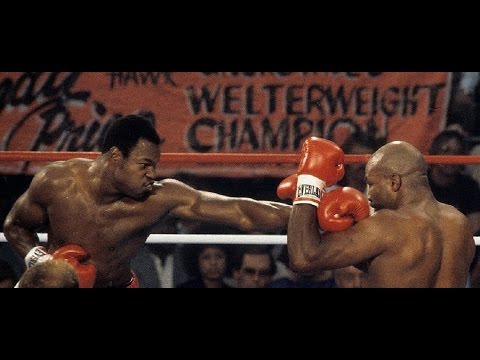 It was on this day in 1979 when Shaves got his second and final crack at the heavyweight crown. Larry Holmes, a former sparring partner for both Ali and Shavers, had made good on his own promise to reach the top of the mountain (the promise made to himself mostly, but also to silence the doubters), and like Shavers, Holmes never had things at all easy. Not once but twice did Holmes have to risk his chin, his livelihood, his career against the wrecking ball fists that belonged to his former spar-mate: once before he defeated common opponent Ken Norton to become WBC heavyweight champ, with Holmes fighting Shavers again in a title defence a year later.

And how Holmes came within a whisker of being taken out in the rematch. Holmes had dominated Shavers over the course of 12 rounds in March of 1978, with a 27-0 “Easton Assassin” winning a wide decision in the title elimination bout with no real problems. In the rematch, disaster very nearly struck.

Shavers, getting on some at age 35 to Holmes’ 29, had strung together five wins since being all-but shutout by Holmes, with “The Acorn,” as Ali had dubbed Shavers when they fought back in 1977, picking up a huge 1st round KO win over Norton. This earned Earnie a shot at Holmes. Once again these two heavyweights with such opposing styles met in Las Vegas. Holmes was now perfect at 31-0, Shavers was now sporting a 59-7-1 ledger.

Once again, Holmes used his magnificent left jab to good effect, keeping an advancing Shavers at arm’s length, unable to detonate any dynamite. Shavers stalked and grinned, the pace, set by the champion, a hot one for two big men. Holmes was piling up points, as he had done in the first fight. Would Holmes win another wide decision over his outclassed challenger?

In round seven it didn’t look like it. Shavers, his left eye having been bleeding since the fourth, his right eye also leaking, at last got in close and capitalised on an opening. A bomb of a Shavers right hand smashed into Holmes’ skull, and just like that, the champ fell. Hard. Holmes landed on his back, the fall snapping him back into consciousness. Larry had looked for all the world like a fighter who was out, done for, obliterated, yet he somehow managed to haul himself upright.

Holmes, in his fine autobiography, writes how he “saw a camera flash at ringside, and then, boom, I was down.” Shavers “hit like hell,” Holmes said. Up – nobody knows how – at the count of “5,” Holmes took everything Shavers could muster during the remainder of the round, the challenger doing all he could to rip the title away. But Holmes not only survived, he fought back. Shavers’ big chance had passed.

Shavers, exhausted and busted up (he later said Holmes had thumbed him in the eye) ate a ton of leather in rounds nine and ten, and then, finally, mercifully, referee Davy Pearl decided he’d seen enough a round later. Shavers had given his all and he had come close. But Holmes, having retained his belt for the fourth time, had proven he was the baddest big man on the planet.

Still, Holmes’ fine win aside, the big talking point after the fight began with the following sentence: “how the hell did he get back up!”

Larry Holmes had many fine qualities, but his powers of recovery truly were second to none.