Soto Karass scored a 12th round technical knockout victory over a remarkably resilient Berto in front of 8,811 fans in the main event on SHOWTIME at the AT&T Center in San Antonio, Texas.

In an event dubbed Knockout Kings II, Soto Karass came out of the gate strong, establishing and displaying his power against Berto, who injured his right shoulder in the early rounds of the fight and was essentially limited to his left hand for the majority of the bout.

Berto fought through the pain, at times was able to hurt Soto Karass (28-8-3, 17 KO’s) and assert himself back into the fight, but Soto Karass kept his foot on the gas and continued to pick apart Berto (28-3, 22 KO’s), finally scoring a knockout at :48 of the final round, capturing the vacant NABF Welterweight Championship.

“My corner just told me to keep on working and I didn’t think at any moment about his shoulder,” Soto Karass said. “I’m dedicated 100 percent to boxing. I stopped clowning around. My corner told me to come out and start boxing, but I said, ‘no, I’m going to knock him down.'”

No one would have blamed a visibly injured Berto if he stopped fighting due to the shoulder injury, but he pressed on knowing it was a must-win crossroads fight.

“I think I tore it out of the socket early, maybe the fourth round,” Berto said. “That’s why I kept using my left. I couldn’t really use it at all. At the end of the day I show that warrior spirit every time. I don’t care if I mess up my shoulder. I’m going to put it all on the line.” 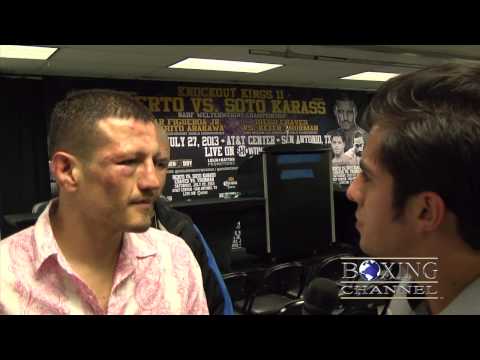 In what will surely be a Fight of the Year candidate, Figueroa (22-0-1, 17 KO’s) and Arakawa (24-3-1, 16 KO’s) threw 2,112 total punches over 36 minutes of non-stop action. While Arakawa threw 1,170 punches, he landed just 280 to Figueroa’s 480. Figueroa, who was cut on the nose from an accidental head-butt in the third, landed power shots, knocked down Arakawa twice and at times seemed to have his opponent out on his feet.

“It’s what I’ve looked forward to since the beginning,” said Figueroa, who complained to his corner that he injured both his hands in the fight. “My respect to this guy. He can take a beating. We both took a beating. The only things that didn’t hold up were my hands.”

Arakawa deserved the praise as he showed tremendous heart in the slugfest in which he went down for just the fourth and fifth times in his career.

“The only thing I can say is Figueroa was very strong,” Arakawa said. “I was thinking about all the people that supported me up to this point to get to this level and that’s what kept me going.

In the SHOWTIME CHAMPIONSHIP BOXING opening bout, undefeated contender Keith “One Time” Thurman handed Diego “La Joya” Chaves the first loss of his career and walked away with Chaves’ WBA Interim Welterweight World Championship with a knockout at :28 of the 10th round.

In what started out as a slugfest and turned into a boxing match, Thurman (23-0, 19 KO’s) bounced back from a bloodied nose in the third round, altered his strategy and changed the pace of the fight. Thurman dropped Chaves (20-1, 18 KO’s) with a lethal left hand to the body with less than a minute to go in the ninth, just the third time the previously unbeaten Chaves touched the canvas in his career. Thurman swarmed Chaves to opened up the 10th round, dropping him with a strong right had after an onslaught of power shots. Chaves got to one knee, but didn’t try to beat the count and the referee stopped the bout.

Thurman was awarded a $10,000 bonus by Golden Boy Promotions for the knockout of the night.

“I came in this fight to have multiple game plans,” Thurman said. “I knew he would be my toughest opponent. I wanted to punch him, I wanted to box him and later on, I was able to hit him with that beautiful body shot.

“You save the tools that you want to use for the later rounds. I had a feeling he was going to die out.”

“He connected very well on my temple and I couldn’t recuperate,” Chaves said. “I don’t regret that the referee stopped the fight. I thought I was winning the fight when they stopped it. I hope I get a rematch and come back soon.” 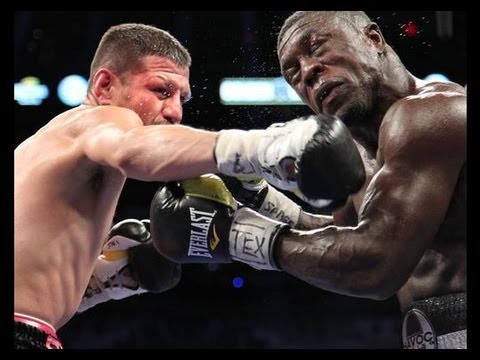 On SHOWTIME EXTREME, undefeated contender Anthony Dirrell improved upon his perfect record with a dominating third round technical knockout win (2:36) over Anthony Hanshaw. Dirrell (26-0, 22 KO’s) showed off impressive power in both hands against Hanshaw (23-4-2, 14 KO’s), who was defeated by Anthony’s brother Andre in similar fashion in 2008.

“I’m feeling good about the TKO. I did it and I want (Sakio) Bika next,” Dirrell said. “I definitely planned it this way. I just knew it was a matter of time before I knocked him out. My brother told me what it was going to take and I went out and did it.”

“I knew he was a lot bigger than Andre,” Hanshaw said. “I came to fight, but he was too strong. I wanted to box more and stay within my range, but he caught me with a right hook and again with a left and that was it.”