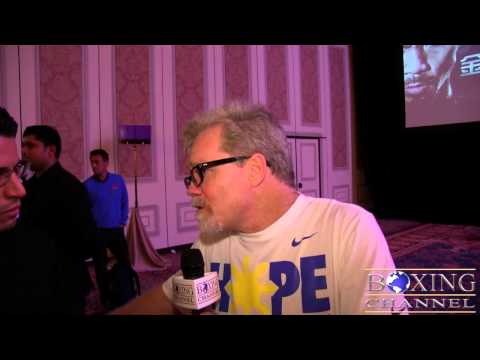 It really wasn’t much of a fight unless your idea of a fight is to stick a slow guy with a high guard in the ring with a much faster guy. It was kind of boring because it wasn’t competitive and it reminded me a lot of the mismatch that Bob Arum set up between Pacquiao and Joshua Clottey back in 2010 except that Clottey mostly stood in one place all night while covering up with a high guard to block incoming. In contrast, Rios, using his high guard, followed Pacquiao around like a moving punching back.

Every round was pretty much the same with Rios plodding after Pacquiao, taking dozens of shots to the head, some of which he block but most of it he couldn’t. Rios would then get inside and Pacquiao would hold onto him to try and keep him from punching. Rios would keep punching, and then referee would warn Rios about his punches from time to time.

Pacquiao used a lot of angles to land his shots and get away without getting hit. He hardly needed to though because Rios was too busy with his high guard to throw a lot of shots. He looked more like a sparring partner than an opponent. He picked up $4 million for the fight, so I imagine he’s happy right now even though he took beating.

Rios suffered a cut over his left eye in the 6th round from the many shots he was hit by in the round. His corner did a good job of controlling the cut.

After the fight Pacquiao was asked if he’d like to fight in the U.S again and he said “Yes, I’d like to fight in Las Vegas, Nevada again.” As for who his next opponent will be, Pacquiao says he’ll leave that up to his promoter. The choices are pretty limited. Pacquiao has Tim Bradley or Ruslan Provodnikov. Juan Manuel Marquez already said no to the fight, although I expect Arum to still make an attempt to try and get him to agree to a 5th fight. But it’s not going to happen. Floyd Mayweather Jr. is also someone that Arum will likely try and negotiate a fight with, but that fight isn’t going to happen either.

The undercard was embarrassingly bad with not one good fight on it. Former two-time Chinese gold medalist Zou Shiming (3-0) defeated some hopelessly over-matched opponent named Juan Toscano (4-3) by a one-sided 6 round unanimous decision. Toscano looked amateurish in turning his back on the flyweight Shiming at times to try and escape punishment, but Shiming would keep throwing punches. The judges scores were 60-54, 60-54 and 60-52. Shiming looked like he was trying to load up with his shots to impress the crowd. However, just looked like a weak flyweight, but he did land a lot of punches against this over-matched opponent.

If Arum wants to keep Shiming unbeaten, he’s going to need to keep matching him against guys like the 4-3 Toscano because Shiming doesn’t look anything close to being as good as the top flyweights in the division. Shiming just looks like a hot dog without any power and a sloppy game.

In another mismatch, IBF featherweight champion Evgeny Gradovich (18-0, 9 KO’s) stayed unbeaten with a 9th round TKO win over the light hitting Billy Dib (36-3, 21 KO’s). Dib took a lot of punishment in this fight and was knocked down in the 6th round. The bout was halted in the 9th round with Dib’s corner recommending that it be stopped.

Heavyweight Andy Ruiz Jr. (21-0, 15 KO’s) stayed unbeaten to defeat Tor Hamer (21-3, 14 KO’s by a 4th round stoppage. Hamer opted not to answer the bell for the 4th. The fight was pretty competitive through the first 2 rounds with Hamer landing a lot of shots against the flabby Ruiz Jr. However, Hamer stopped throwing punches in the 3rd and he ended up taking punishment.

Ruiz Jr. looks like a lesser version of Chris Arreola. I’m not sure where this guy is going in the division because he doesn’t match up against the Klitschkos and he’d out of his league against the contenders.