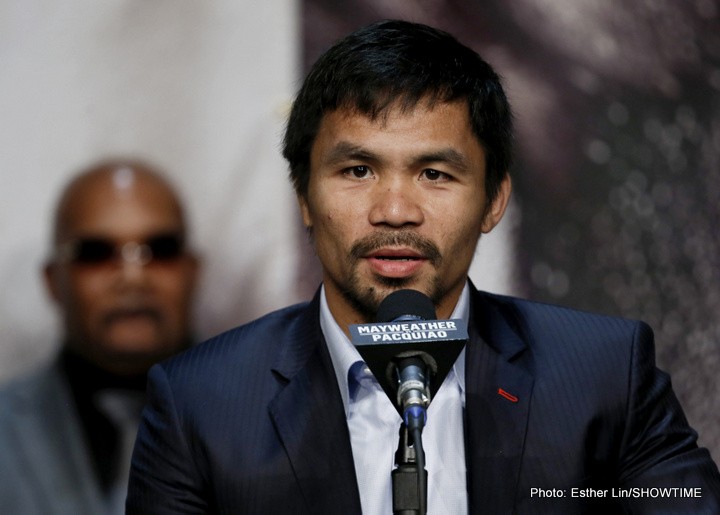 It took quite a while, a few months in fact; but Australian puncher Jeff Horn finally came face to face with superstar Manny Pacquiao yesterday (Australian time). The two met at the press conference to officially announce the July 2 fight that will see Pac Man defend his WBO welterweight title against the unbeaten, and much younger Horn.

The two had nothing but respect for one another, smiling as they faced off and posed for media photos. Trash talking is simply not Manny’s style, never has been, while Horn is more the quietly confident type. Pacquiao has told Horn to be “100 percent” on July 2, so the two of them can give the paying fans an exciting fight. This fight, one of, if not the biggest in Australian boxing history, will be explosive; so said promoter Bob Arum, who added how the American fans and writers are “warming to the fight.”

“I don’t have anything against Manny. He’s a legend,” Horn said as quoted by The Courier Mail. “But this is my chance. I know the importance of it. If I beat him, I’ll make millions and who knows what will happen when the bell goes? If you believe in yourself and you have a goal you can get there. I know he’ll come charging at me throwing a lot of punches. I know I really have to watch his big left hand but if I can get him to walk onto my right cross, who knows – I might knock him out in the first round like I did to Sam Colomban when I won the Australian title.”

It would of course be a huge sensation if Horn did manage to KO Pacquiao, especially in the opening round. But, when two punchers get in there anything can of course happen. And Pac Man is planning on throwing a lot of punches – his legendary trainer Freddie Roach has gone on record as saying he wants to see his fighter score a KO in this fight, thus ending a drought that has plagued the all time great since 2009 – as he explained.

“I think Jeff Horn will make an exciting fight,” Pacquiao said. “I throw a lot of punches and he likes to go toe-to-toe. He is very aggressive.”

Millions of Australian fight fans will be cheering underdog Horn on, while according to early reports, a live crowd in excess of 50,000 is expected on July 2.

READ:
Manny Pacquiao vs. Edwin Valero - Who Wins (aside from the fans)?
Read: Tyson Fury doesn’t believe there’s a heavyweight who can “lace my boots up;” vows to shed 100 pounds and return to glory
Read: Joseph Maphosa faces Gary Reeve on 5/13
Follow @boxingnews24