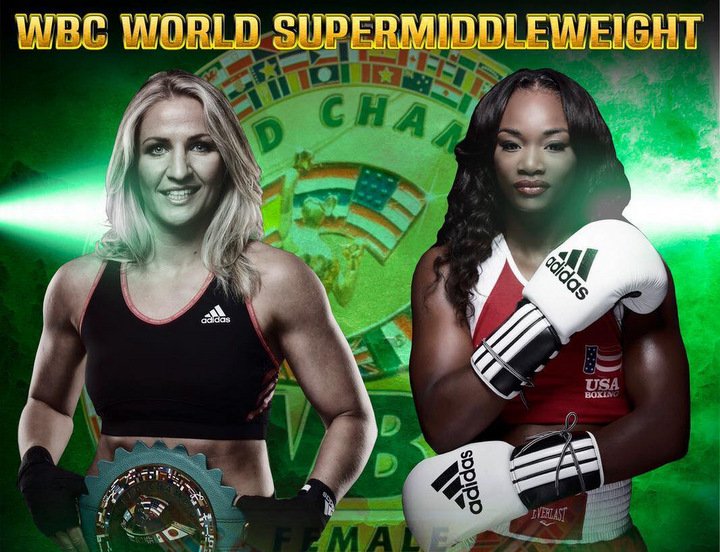 On Friday, August 4, two-time Olympic Gold Medalist Claressa “T-Rex” Shields will make another significant stop on her historic journey through the sport of boxing.

In the 10-round main event of Salita Promotions’ “BATTLE OF THE BEST” event at MGM Grand Detroit and televised live on ShoBox: The New Generation (10;30 p.m. ET/PT) Shields (3-0, 1 KO) will challenge for her first world title in just her fourth fight against reigning WBC Super Middleweight World Champion Nikki Adler (16-0, 9 KOs) of Germany.

Already considered a national treasure and award-winning female role model, Shields’ boldly quick world-title quest will catapult her to superstar status and into boxing history once again. By comparison to other female boxing stars from past and present, Shields is way ahead of the curve for a typical rise through the ranks:

The historical significance of this fight is not lost on the 22-year-old Flint, Michigan native.

“It’s a great honor to be mentioned in the same sentence as Lucia Rijker, Christy Martin, Laila Ali and Ann Wolfe, among others,” said Shields. “I want to lift boxing to new heights and help open doors for women in boxing. Beating Nikki Adler is a must for me to achieve my goals.”

Shields’ co-manager, Mark Taffet, says this rocket ship to the top is all part of the plan set out for Shields. “We want every one of Claressa’s fights to occupy a special place along her historic journey. August 4 against Nikki Adler, and the opportunity to win a world title in just her fourth pro fight, is an important ‘first’ in what will be a career of game-changing firsts for Claressa Shields.”

A native of Flint, Mich., Shields (3-0, 1 KO) is the most accomplished amateur boxer in U.S. history and the only American to capture back-to-back boxing gold medals at the Olympic Games. The 22-year-old will challenge for a world title in only her fourth professional fight against fellow undefeated Adler (16-0, 9 KOs), a German star who will make the third defense of her WBC 168-pound title. The bout will also be for the vacant IBF Super Middleweight Title.

Shields is headlining for the second time on national television, building on her history-making debut last March in what was the first women’s main event in premium television history. If Shields dethrones Adler on ShoBox, she’ll become the 70th world champion in the history of the prospect developmental series.

“It’s a huge opportunity to fight in the U.S. on SHOWTIME against Claressa Shields,” Adler said. “I am the multiple-time world champion and Claressa is a two-time Olympic Gold Medalist – why not fight in the biggest matchup possible? This is a great challenge and we both will show our true potential. I know I’ll give everything I have to be successful, as I have always done. I’ve fought throughout the world, but never in the U.S. It’s really a dream to fight in the biggest women’s boxing event in 2017.

Shields said, “It is a dream come true for me to be fighting for a major world title in just my fourth professional fight. I thank the champ, Nikki Adler, and her team for accepting the challenge and for coming to the U.S. for this championship. This fight is not only a milestone for me, it also is the biggest fight of the year in women’s boxing. I want to thank SHOWTIME for their commitment to me and for their support of women’s boxing. I promise to be in the best shape of my life and to give all my fans a performance to remember.”

Tickets for the event promoted by Salita Promotions are on sale now and are priced at $350, $250, $125 and $60. They will be available at www.ticketmaster.com.

Gordon Hall, ShoBox: The New Generation Executive Producer and SVP of Production, SHOWTIME Sports, said, “ShoBox is about challenging prospects and making step up fights, and that’s what Shields vs. Adler is all about. Claressa is returning to ShoBox in a unique opportunity to not only face her toughest opponent to date but to challenge a world champion and look to unify the division in only her fourth fight. The matchup and stakes speak for themselves. We are proud to continue to deliver the best prospects in competitive matchups.”

Promoter Dmitriy Salita, said, “I am thrilled to be promoting what I expect will be the biggest women’s boxing event of 2017. Claressa Shields is on a quest to make history and is seeking to become a world champion in only her fourth professional bout less than a year after winning her second Olympic Gold Medal. Shields vs. Adler is the kind of matchup we expect from great fighters. These two women, both skilled, both determined, are certain to give fans around the world, and those watching on ShoBox, an action-packed fight that is fought at the highest level. It will be a night to remember where the sports world may see the emergence of a new star.”

Shields’ co-manager, Mark Taffet, said, “This second main event telecast on SHOWTIME represents yet another historic step forward in the journey of Claressa Shields. Claressa is committed, in return, to pursuing the biggest and best fights available as the profile of women’s boxing in the U.S. and around the world continues to grow. This world title fight against Nikki Adler, a monumental challenge for Claressa in only her fourth pro fight, shows how committed Claressa is to fulfilling her dreams and leading the sport to unprecedented levels.”

The 30-year-old Adler, a Croatian fighting out of Augsburg, Bayern, Germany, will make her U.S. debut against Shields. A former German amateur champion, Adler will make her third defense of the WBC crown she won in 2013 via unanimous decision against Zane Brige in Russia.

In 2015, Adler defeated Szabados via unanimous decision in her first defense of the WBC belt, and knocked out Elene Sikmashvili in her second defense in 2016. In March of this year, she won the vacant WIBF and GBU World Super Middleweight Championships by unanimous decision over Mery Rancier.

Shields compiled an amateur record of 77-1 record and won her first Olympic Gold when she was only 17 years old in the inaugural women’s boxing competition at the London Games in 2012. She won a second gold medal at the 2016 Olympics in Rio and turned professional three months later.

Active in her community, Shields advocates for several social issues and serves as an inspirational figure in her hometown of Flint, a city beset by problems.