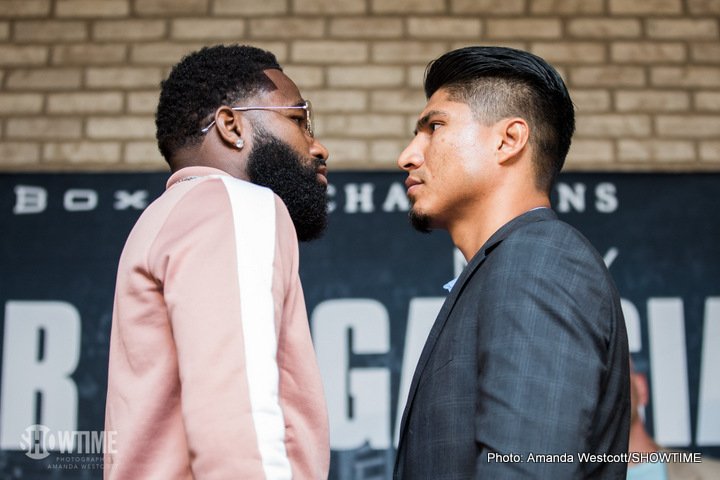 Four-division world champion Adrien Broner has taken a unique approach as he prepares to face undefeated three-division titlist Mikey Garcia this Saturday, July 29 live on SHOWTIME (9 p.m. ET/6 p.m. PT). One of only 16 four-division champions in boxing history, the outspoken Broner is practicing yoga in his Colorado Springs-based camp as he attempts to minimize the distractions and focus on perhaps the biggest fight of his career.

“I feel like my back is against the wall,” Broner says in this SHOWTIME Sports video feature. “Everybody is counting me out once again.

The full day of high-stakes boxing will begin at approximately 5:30 p.m. ET/2:30 p.m. PT with streaming coverage from Belfast, Ireland as 2016 Fighter of the Year Carl Frampton makes his long-awaited homecoming. The former two-division titlist Frampton (23-1, 14 KOs) will face once-beaten Andres Gutierrez (35-1-1, 25 KOs) in a 12-round featherweight bout, his first since splitting a par of slugfests with three-division world titlist Leo Santa Cruz. Coverage of Frampton vs. Gutierrez will be provided by Channel 5, a television station in Northern Ireland.

SHOWTIME CHAMPIONSHIP BOXING Prelims and Frampton vs. Gutierrez will be available to U.S. audiences only.

SHOWTIME CHAMPIONSHIP BOXING Prelims is an extension of SHOWTIME BOXING on SHOWTIME EXTREME, which is the first premium television series to offer live undercard coverage. Both offerings provide bonus bouts to viewers at home, delivering an experience that was previously available only to fans in arena. Via SHOWTIME CHAMPIONSHIP BOXING Prelims, viewers are afforded the unique opportunity to interact with the boxing community during the event in real time.

SHOWTIME Sports also will live stream the Broner vs. Garcia final press conference on Thursday and the official weigh-in on Friday across digital platforms, including Facebook Live and YouTube.