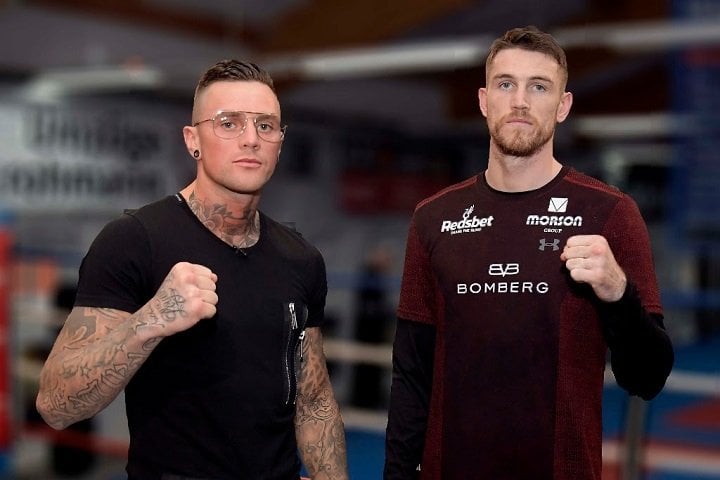 Callum Smith (23-0. 17 KOs) and Nieky Holzken (13-0, 10 KOs) faced off for the first time at a media workout before their Trophy Semi-Final on Saturday at the Arena Nürnberger Versicherung.

“I am stepping up to meet one of the big guys in the super middleweight division,” said Holzken at the public workout. “But the fans can expect the unexpected on Saturday. I am here to beat Callum Smith.”

Callum Smith’s original opponent Germany’s Juergen Braehmer revealed yesterday he would be unable to compete in the semi-final because of a feverish infection.

The World Boxing Super Series’ format meant unbeaten Holzken was already on standby as a reserve.

After months of preparations, WBC Diamond Champion Callum Smith was forced to switch focus to a new challenge.

“Holzken looks like a good fighter,” said Smith after watching Holzken hitting the pads. “It really doesn’t matter who I am facing on Saturday. I wasn’t happy about my performance against Erik Skoglund in the quarter-final, but this time I will make a statement. Not only to the boxing fans, but also to George Groves. I want to put on a good show on Saturday,” said Smith.

Tickets for exciting match-up Smith vs. Holzken are available via eventim.de.

AIRING LIVE IN CANADA THIS SATURDAY EXCLUSIVELY ON SUPER CHANNEL

The Smith vs. Holzken card, starting at 2 p.m. ET, will air live in Canada, exclusively on Super Channel.

Holzken, an undefeated Dutch prospect, has replaced two-time world champion Juergen Braehmer, of Germany, who withdrew from the WBSS semifinals match due to illness.

“I have been battling a feverish infection since Sunday,” Braehmer explained. “Unfortunately, a fight in this state is out of the questions. It is not possible for me to go into the ring like this and I would like to apologize to my fans. I was well prepared and looking forward to fighting Callum.”

The Smith-Holzken winner will advance to the WBSS super middleweight championship final against World Boxing Association (WBA) and International Boxing Organization (IBO) Super Middleweight World Champion “Sir” George Groves (28-3, KOs), of the United Kingdom, June 2 at The O2 Arena in London, in a battle for the coveted Muhammad Ali Trophy.

Smith was the least tested WBSS semifinalist in terms of having faced quality opponents, as well as the youngest at 27. The undefeated Brit is one of four fighting Smith brothers.

“I gave an interview last week and said it was great there have been no drop-outs,” Smith said. “Looks like I spoke too soon. We got the call as we were boarding the plane. I am committed to fighting Saturday and will fight whoever the World Boxing Super series puts in front of me.”

The 34-year-old Holzken was preparing to fight Dmitri Chudinov in Saturday’s WBSS Super Middleweight Substitute Fight. He has had only four scheduled 10-round matches during his five-year professional career, the most notable being a win by 10-round unanimous decision in 2016 over Farouk Daku (20-9-1) for the vacant BeNeLux super middleweight title.

Holzken is determined to make the most of this opportunity by upsetting Smith, despite his obvious leap in class. “I’ve been waiting for this chance to come,” Holzken commented. “I signed up as a substitute fighter, so I’m in great shape and prepared for Saturday. I’ve watched Callum fight many times. I study everyone in my weight class. He’s a good, solid fighter. We’re both big body punchers. It will make for an excellent fight. Callum, you better be ready, because I am, and I’m coming to beat you!”

Five exciting fights on the “Smith-Holzken” card, presented by Sauerland Event, will air exclusively in Canada on Super Channel.

All WBSS semifinals and championship fights will also be available on Super Channel On Demand.

In addition to all the WBSS quarterfinal and semifinals matches, Super Channel aired major boxing events live in 2017 like Brook vs. Spence Jr., Pacquiao-Horn, Eubank, Jr. vs. Abraham, Lomachenko vs.Marriaga, Crawford vs. Indongo and Smith vs. Williams II.

To watch all the World Boxing Super Series action live, as well as more exciting boxing to come, fight fans in Canada can contact their local cable provider to subscribe to Super Channel and all that it offers, including premium series, movies and much more, for as low as $9.95 per month.