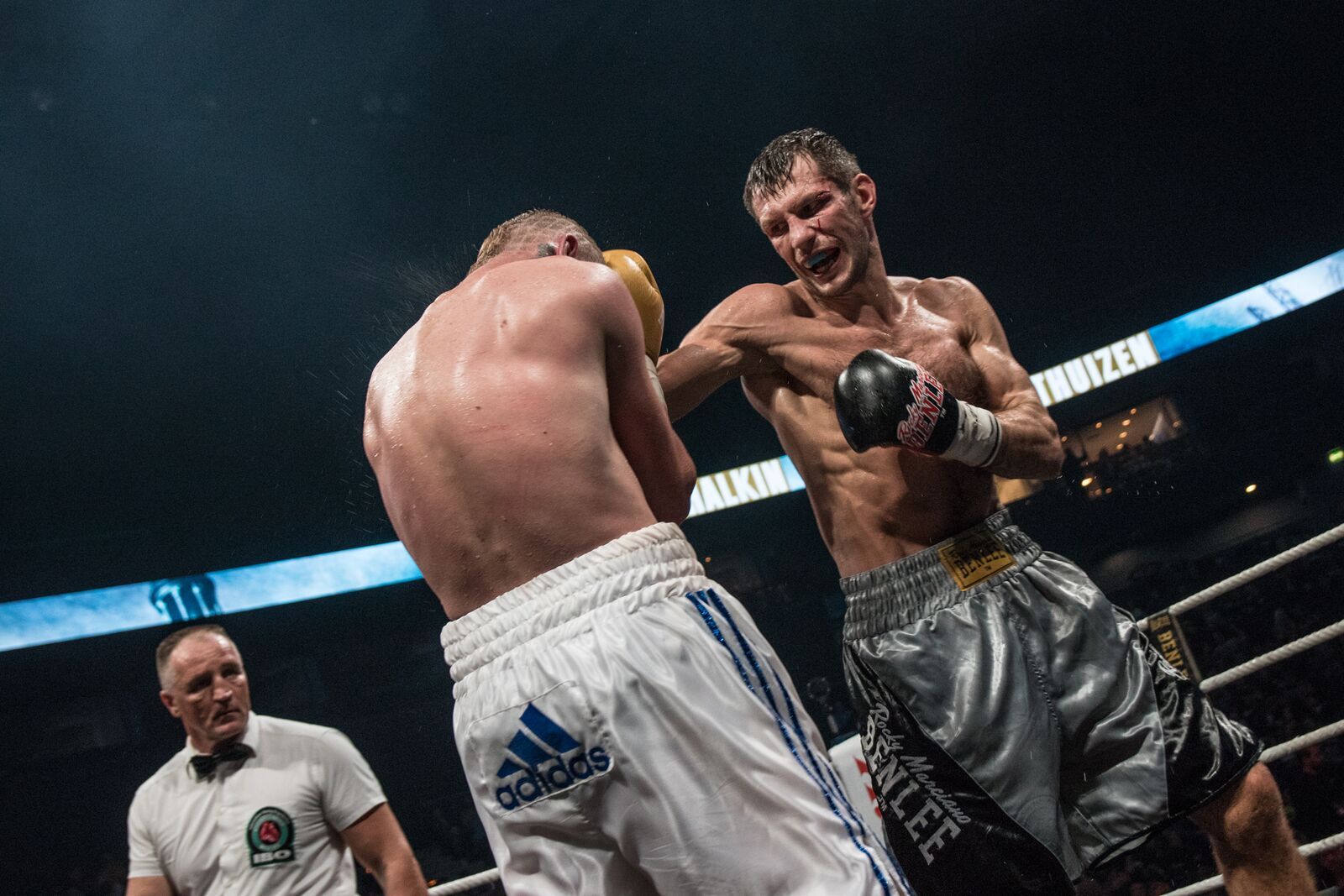 Certain nations have always been known for producing boxing talent: Mexico, Great Britain, the Philippines, Japan and, of course, the United States.

And now Russia stands on the brink of joining this elite company. The latest Russian import from Irkutsk in eastern Siberia, light heavyweight Igor Mikhalkin (21-1, 9 KOs), faces the greatest challenge of his career as he makes his United States debut.

“It has to do with the Russian way of life, our discipline. Russian fighters in general always have a big heart and a big will to win. We strive for the best. This willingness to win is why so many Russians are fighting on March 3,” said Mikhalkin.

Mikhalkin says fighting Kovalev was inevitable. “I didn’t think until recent it was possible, but the way my career and Sergey’s career were moving, it was inevitable we would have to fight each other. It’s destiny we would see each other in a boxing ring,” said Mikhalkin.

Mikhalkin and Kovalev aren’t strangers; far from it, in fact. The two fought side-by-side as teammates in their amateur days two decades ago. Mikhalkin says, “What I remember of Sergey from those day, he was always working and training really hard, and doing his job as a boxer. Since then, I’ve seen every one of his fights and I respect him for what he has done.”

Mikhalkin said Kovalev’s style hasn’t changed much since he acquired solid fundamentals during his amateur days and he’s taken this training forward.

“For me, this is a once in a lifetime thing,” he continued. “Even though I am not well known, I don’t think Sergey will take this as an easy fight. He’s not underestimating who Igor is as a not-so-well-known name.”

Mikhalkin also said that it is a “big deal” for Russian boxing fans, who will be watching in his hometown and throughout the nation. The fight airs in Irkutsk at about 12 noon on Sunday. “It’s a comfortable time, Sunday at noon. It’s definitely going to be something everyone will be watching. There couldn’t be a better time to watch boxing,” said Mikhalkin.

Also watching will be Mikhalkin’s family. Both his father and brother were professional boxers. “They are proud of me. I have a great opportunity. They are a bit worried for me and are giving me all their support,” said Mikhalkin. Have they given him any advice? With a laugh, Mikhalkin said, “What they said was ‘Train well, train hard, do things the right way.”

Mikhalkin said his three-year-old son, Makar, will also be on his mind. “Things changed in my life when my son was born. It’s great motivation. I started to value things differently. I will do anything for my son to provide for him, and give him a great life,” said proud father Mikhalkin.

For fans who’ve never seen Mikhalkin, he says seeing is believing. “When it comes to my boxing style, it doesn’t matter what I say now. It’s better to see me fight. On March 3rd, people in New York and America will see what I’m made of as a boxer. All you need to know about me is that I’m a good person,” said Mikhalkin.

About March 3: The Saturday, March 3 main event between Sergey “Krusher” Kovalev and Igor Mikhalkin is a 12-round match-up for the WBO Light Heavyweight World Title at the Theater at Madison Square Garden in New York City. The co-main event features WBA Light Heavyweight World Champion Dmitry Bivol versus Sullivan Barrera in a 12-round title fight. Tickets range from $50 to $300 and are available at TicketMaster.com and the Madison Square Garden box office. The event is promoted by Main Events, Krusher Promotions and World of Boxing in association with EC Box Promotions and will be televised live on HBO World Championship Boxing® at 10:05 p.m. ET/PT.

The event will be promoted by Main Events, Krusher Promotions and World of Boxing in association with EC Box Promotions and televised live on HBO World Championship Boxing beginning at 10:05 p.m. ET/PT.

Sergey Kovalev continues his rise back to the top of the light heavyweight division when he returns to the Mecca of Boxing on Saturday, March 3rd to defend the WBO Light Heavyweight World Title versus southpaw Igor Mikhalkin, originally of Irkutsk, Russia, now fighting out of Hamburg, Germany. A skilled boxer, Mikhalkin puts his ten-bout winning streak on the line as he steps up to challenge one of the most fearsome punchers in professional boxing at New York City’s Theater at Madison Square Garden.

In the co-main event, newly minted WBA World Light Heavyweight Champion Dmitry Bivol of Russia makes his second defense of the title against Cuba’s streaking Sullivan Barrera, the mandatory challenger. Viewed as a “toss-up” bout by boxing insiders, Bivol-Barrera matches a young, explosive champion against an experienced veteran hungry for his first world title fight. Presented by Main Events, Krusher Promotions and World of Boxing in association with EC Box Promotions, the doubleheader will be televised live on HBO World Championship Boxing®. Ticket information will be announced shortly.

Last month, the Big Apple welcomed Kovalev (31-2-1, 27 KOs), the two-time light heavyweight world champion, with open arms as he made his New York debut with a stoppage of Vyacheslav Shabranskyy in the second round to reclaim his WBO Light Heavyweight World Title at the Theater at Madison Square Garden. Eager to return to the ring and to his new home, “Krusher” thrilled his large following of Russian fans last month and he expects an even bigger contingent to greet him in March. As he sits comfortably atop the light heavyweight rankings and in the top five pound-for-pound, Sergey’s goal is to put on a great show for the fans in attendance and watching on HBO.

Kovalev said, “I really enjoyed fighting at Madison Square Garden in November. It feels like my home. I’m very excited to go back to MSG and to fight on HBO. Everyone should to have a great time watching my fight!”

Kovalev’s manager, Egis Klimas, added, “It’s still very difficult to find light heavyweights who want to fight Sergey. I’m surprised! Many thanks to Igor Mikhalkin, who is confident enough to take on The Krusher and get a big opportunity. I don’t think it’s a coincidence that Shabranskyy is Ukrainian and Igor is Russian. They’re tough! Not afraid!”

Mikhalkin (21-1, 9 KOs), 32, a southpaw originally from Irkutsk, Russia, now resides in Hamburg, Germany. He made his professional debut in 2007 with a second-round stoppage against Stefan Stanko and went on to win his first 11 bouts with seven of those wins coming by way of knockout. The lone blemish on Mikhalin’s record is a unanimous decision loss to former WBO Light Heavyweight Title contender Aleksy Kuziemski in 2010. In the eight years since, Igor amassed several belts: the IBO Light Heavyweight World Title, EBU Light Heavyweight Title and the WBO Intercontinental Light Heavyweight Title. Mikhalkin will be making his US debut against Kovalev on March 3.

When asked about his upcoming title shot against Kovalev, Mikhalkin replied, “It is a great honor for me to fight in the United States. This will undoubtedly be the biggest and hardest fight in my career. Kovalev is for me the strongest man in this weight class. But I feel ready. The fight against Kovalev comes at the perfect time. I feel stronger than ever and I want to show the American boxing audience a great fight.”

Mikhalkin’s promoter, Erol Ceylan, of EC Box Promotions added, “We are happy to organize this fight together with Main Events. Kovalev is a big name in the light heavyweight division. Igor has absolutely earned this fight and he has the class to defeat Kovalev. Igor has already won many great foreign victories in his career and I’m sure that he will be successful again.”

In the co-main event, the young champion, Dmitry Bivol (12-0, 10 KOs), makes his New York debut and fights in the United States and on HBO for the second time. Sullivan Barrera (21-1, 14 KOs), who has become a fixture on HBO, returns to The Garden for his first world title fight. Both men were very focused on making this fight and facing each other. Some boxing commentators believe this matchup could be the fight of the night.

“This is not the first time that I am training for the most important fight of my career, and this motivates me and makes me happy! Sullivan Barrera is what we wanted and I am glad that we will meet in the ring soon,” explained WBA Light Heavyweight World Champion, Dmitry Bivol.

Andrei Ryabinskiy, of World of Boxing, Bivol’s promoter, explained, “We have planned a very active schedule for Dmitry Bivol and World of Boxing in 2018 and are happy to start the year with an event at Madison Square Garden on March 3rd with Dmitry Bivol vs Sullivan Barrera. I would like to thank Kathy Duva and HBO and hope that our partnership will prosper.”

Bivol’s manager, Vadim Kornilov added, “We are glad that our first appearance in 2018 will be against one of the best in the division in the legendary Madison Square Garden. Sullivan Barrera is a serious test for Bivol and we have a lot of respect for him taking this fight. We want to prove to the world that it was not by accident that this young kid became a world champion in only his 12th ring appearance, he is already fighting on HBO for his third time, and he is fighting one of the best fighters in the division with only one career loss that came at the hands of Andre Ward. Bivol has already been mentioned as a possible pound for pound prospect by many and we will continue fighting the best out there to prove this!”

Barrera said, “I came from Cuba with one dream and that was to win a world title. I know it won’t be easy and I know I chose the toughest road than anyone to get here. But I know all of the tough opponents I have agreed to fight and hard work will pay off. On March 3rd, I will become the most deserving light heavyweight champion in boxing.”

Main Events CEO Kathy Duva remarked, “We’re ready to showcase the light heavyweight division again at Madison Square Garden! We have Kovalev and Barrera both returning to The Theater after big wins in November and we’re adding another light heavyweight champion to the card! Dmitry is a young champion with a bright future ahead of him if he can get past Sullivan, which is no easy task. And Sergey is taking on Igor Mikhalkin, who is a young, but experienced, southpaw and that’s given him some trouble in the past. We’ll round out the show with another lineup of prospects and local guys in great fights to make sure the fans see a really entertaining and satisfying night of boxing.”

About Kovalev-Mikhalkin: The Saturday, March 3 main event between Sergey “Krusher” Kovalev and Igor Mikhalkin is a 12-round match-up for the WBO Light Heavyweight World Title at the Theater at Madison Square Garden in New York City. The co-main event features WBA Light Heavyweight World Champion Dmitry Bivol versus Sullivan Barrera in a 12-round title fight. The event is promoted by Main Events, Krusher Promotions and World of Boxing in association with EC Box Promotions and will be televised live on HBO World Championship Boxing®. Ticket information will be available shortly.