Promoter Lou DiBella believes the September 12 exhibition match between Mike Tyson and Roy Jones Jr could wind up being the most successful pay-per-view fight in 2020.

We still don’t know what the price tag will be to order the Tyson vs. Jones Jr fight on pay-per-view. If they sell the battle between $75 to $100 per household, the referee had better be prepared to let it go to the local conclusion rather than stepping in to halt the action if Tyson and Jones start slugging instead of dancing around.

The amount of fan interest in the Tyson-Jones fight is staggering, and it could lead to the clash bringing in an enormous amount of buys.

Jones (66-9, 47 KOs) and Tyson (50-6, 44 KOs) are fighting an eight-round exhibition match in September at the Dignity Health Sports Park, Carson, Calfornia. There won’t be judges, and if either of them show even a hint of being hurt, the fight will be stopped.

By charging boxing fans to pay to see a fight between two 50-year-olds, it’s bound to disappoint. If the match prematurely, there’s going to be a lot angry boxing fans, and this could result in a massive backlash that could hurt the pay-per-view industry for years to come.

Charging fans to see a boxing match during the pandemic is terrible enough as it is, but it could be worse if the fans don’t receive value for their money.

Will Tyson & Jones slug it out?

“If people want to buy it, God bless them. I’m not going to fault them,” said promoter Lou DiBella to Seconds Out on the news about the Mike Tyson vs. Roy Jones Jr exhibition match. “I know Roy and Mike Tyson, and I have a good relationship with both of them.

“You know what? That may be the most successful pay-per-view in the States because there’s certainly nobody with more name recognition with Mike Tyson and then Roy Jones. They’re prideful men, so I’m guessing they’re going to mix it up in the ring.

“Being around this age [50s] myself, getting in the ring and getting hit in your f**** head in your 50s, I’m not a big advocate of it, but these guys have free will, they want to do it. I wish them health, and I hope they have fun,” said DiBella on the Tyson vs. Jones fight.

It’s pretty easy to predict that Tyson vs. Jones will be the #1 pay-per-view event in 2020 because they don’t have any real competition.

This is what Tyson-Jones is competing with for the top spot in 2020 in PPV sales:

Those aren’t big enough events for them to compete with the Tyson s. Jones fight in September. However, it’s possible that the pay-per-view sales for the Tyson-Jones fight could take a hit if Canelo Alvarez chooses to keep his September 12 date. A lot of boxing fans would instead watch Canelo on DAZN rather than purchasing the PPV fight between Jones and Tyson.

There’s going to be a lot of casual boxing fans that will buy the Tyson-Jones fight so they can say they saw it. With a fighter as great as 54-year-old Tyson, it’s thrilling to see him coming back. It’s just too bad that this isn’t a real fight instead of an exhibition match.

“I hope that the people that buy it get a fun show,” said DiBella. “But I’ve got to be honest with you. The idea that I got to watch [Youtube star] Jake Paul or some of these other numbnuts fighting ex-professional football players and s*** like that, who the f*** wants to see that?

“I’d rather see the exhibition of Tyson and put some real boxing matches underneath it. There’s certainly enough legitimate boxers and fighters that need the work right now. 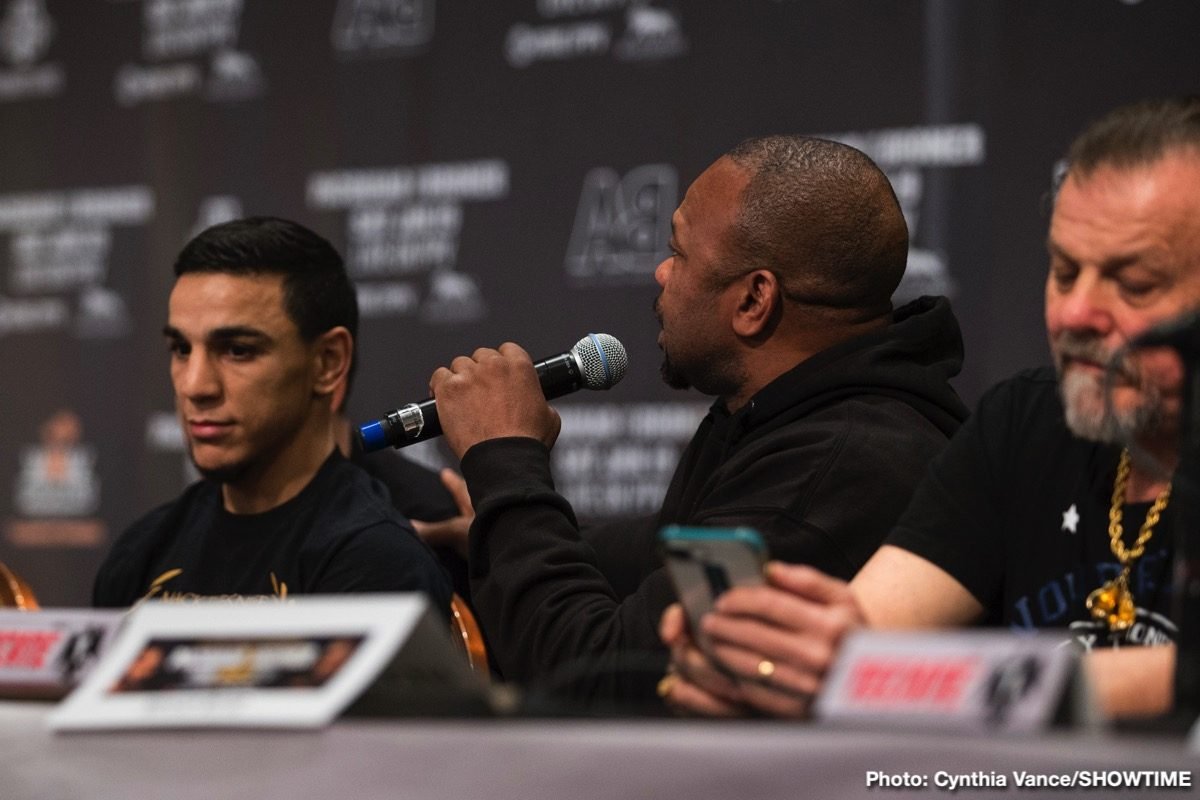 “But I’m not anti-exhibition if people want to pay. As I said, it’s capitalism at it’s best. I mean, if they’re [Tyson and Jones Jr] not holding their punches and the punching power and the size of the headgear they’re using,” said DiBella.

It’s disappointing that the organizers for the Tyson-Jones fight want to put a fight between Youtube star Jake Paul and a football player on the card. That makes boxing look silly when you get a celebrity taking part in a boxing match.

Could you picture the NFL sticking a neighborhood flag football game in front of their broadcasts of games? They wouldn’t do it because it would make the NFL look like a joke.

If guys like Jake Paul want to fight other non-boxers like himself, then he should do it on his own card and not on a card involving professional boxers.

DiBella picks Tyson to win if they slug

“I would go with Tyson. If the fight would have happened back when Roy beat [John] Ruiz, unless Mike caught him and knocked him out, Mike would lose. I don’t know.

“They’re fighters, that’s their motivation. Fighters fight. That’s what they do. They know how to fight. It’s hard for a fighter not to be a fighter, even in old age,” said DiBella.

Tyson probably wins even if Jones does dance and move around the ring. If Tyson unloads on Jones with a shot that has full force on him, he’ll knock him out. It doesn’t matter if Tyson is wearing big 12 ounce gloves. He hits so hard that he’ll stun Jones.

The thing with Jones is that when he gets hurt, he winds up being knocked unconscious. He’s been getting knocked out cold in his fights, and that’s likely what we’ll see for this contest. You can argue that Jones was picked for Tyson precisely because of his weak punch resistance.