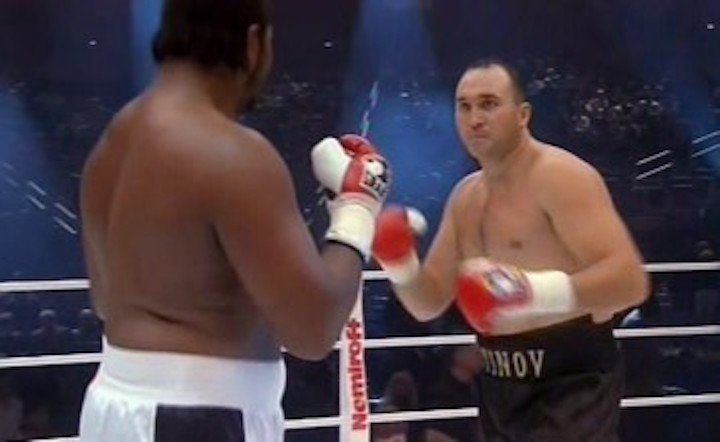 Long-time heavyweight contender, 43 year old Alexander Ustinov was in action yesterday. Fighting on the Sunday card staged in Minsk, Belarus, the veteran picked up a win that came suddenly, as the action was just beginning to heat up. Ustinov got the win when his opponent, Tornike Puritchamiatshvill of Georgia was unable to come out for round-three.

Puritchamiatshvill injured his arm and was unable to continue and he is now 9-14(6). Ustinov has now won two in a row since being stopped by Joe Joyce and he is 36-4(27) overall.

After a slow opening session, things livened up somewhat in round-two, when Puritchamiatshvill managed to open up and tag the huge, 6’8” Ustinov with some shots to the head. Ustinov was forced to fire back and a decent action fight was shaping up. But then Puritchamiatshvill hurt his arm and he was all done. In truth, neither man looked to be in anything like great physical shape or condition.

Still, Ustinov, a pretty big name, keeps on going and maybe the 43 year old who has been in with the likes of David Tua, Kubrat Pulev, Manuel Charr, Michael Hunter and Joyce can pick up another decent payday before he’s finally done. Ustinov has been stopped three times but only good fighters have been able to take him out. Ustinov could still prove to be a good test for many a young, up and coming heavyweight.

As for Puritchamiatshvill, it’s tough to see where he goes from here. The 29 year old has now lost seven fights on the spin, four of these defeats coming via corner retirement. In his last fight prior to facing Ustinov, Puritchamiatshvill lost a decision to the now 7-0 Erik Pfeifer, who next goes in with the red-hot Daniel Dubois.

The heavyweight division will not be back up and running fully until later on in the year, what with the coronavirus messing the schedule up in a bad way. Right now, any live show is most welcome by fight fans the world over.