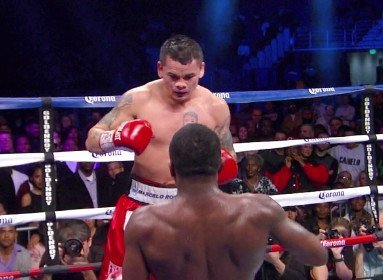 The night when Marcos Maidana had achieved something that most boxing fans did not expect him to, at least not in the fashion that he did it in, by beating Adrien Broner with somewhat an indifferent, casual fashion, the thought of Maidana vs. Mayweather Jr. was born.

There is a respectable number of boxing fans suggesting that Adrien Broner wasn’t himself that night, and that maybe Marcos Maidana simply got lucky, but all that seems irrelevant after seeing Maidana make an easy night of an opponent that was supposed to be the next virtuoso in the sport of boxing.

While the idea of Maidana vs. Mayweather Jr. was born, there was another name that has been carefully and consistently attaching itself to the Mayweather Jr. fight for a long time: Amir Khan.

Why Khan? I think that answering this question will not only take vivid imagination, but also some undisclosed information making Khan a deserving, formidable opponent.

Don’t jump the gun, I did not say that Amir Khan is a bad fighter, as a matter of fact, aside all the bad luck and lackluster performances in the recent past, I think that Khan’s speed and the ability to keep up the pace is exactly what makes him better than most boxers out there. And it’s those attributes that makes him a much more interesting and challenging opponent for Floyd than most others.

Why Maidana? If you listen to what the fans are claiming, Mayweather Jr. is simply picking a fight that will yield yet another groundbreaking paycheck, with absolutely no risk involved. Maidana is most certainly slower than Khan, and speed is what Mayweather Jr. wears his crown for.

Marcos Maidana has a huge heart and an overfilling amount of confidence, and paired together with his boxing style, he is an absolutely perfect opponent for Mayweather Jr., and an utterly hopeless one as well.

When it comes to puncher’s change, Mayweather Jr. should not be considered as a viable option. When fighters try to come up with the popular blueprint to beat Mayweather Jr., they forget that a blueprint is usually made up of factual and provable information. Floyd is an anomaly, and the only fighter that can beat him, is another anomaly; a fighter with variance and inconsistency paired with extraordinary physical attributes.

As far back as I can remember Marcos Maidana was a man of simplicity: go out there, throw a lot, and throw hard. His punches are always reliable when it comes to power, and his will to fight to the very end has never been doubted. But can he rely on that against a fighter that is simply not there to hit?

May 3rd may seem far away, but it’s just around the corner. Just three weeks after Manny Pacquaio gets a shot at redemption against Timothy Bradley, Mayweather Jr. and Broner will cross the same ropes at the MGM Grand Garden Arena. It will be a busy few weeks for MGM Grand, as both fights will bring in armies of fans, of whom many are still waiting for the much sought after Mayweather Jr. vs. Pacquiao bout.