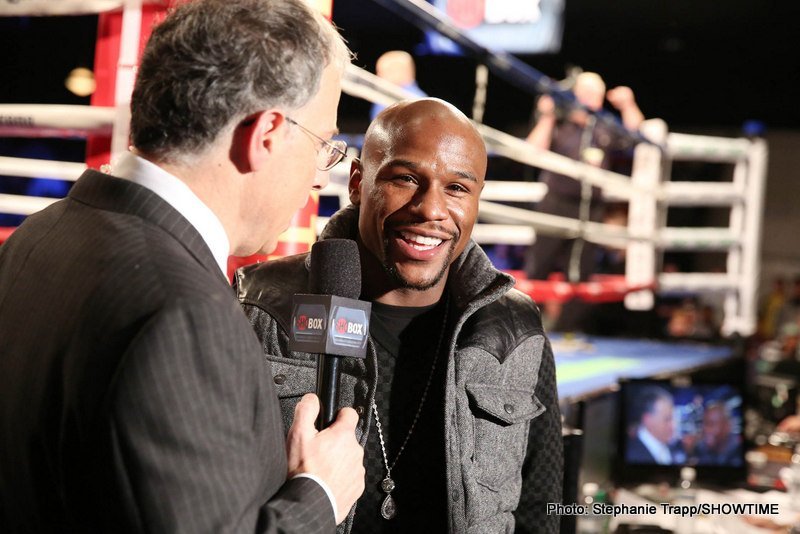 WBA/WBC welterweight champion Floyd Mayweather Jr (46-0, 26 KOs) says a fight between him and former IBF/WBA 140 pound champion Amir Khan (29-3, 19 KOs) can take place next year. In fact, Mayweather is hoping that a fight between them can take place in 2015, because he would like that. However, at the same time he wants his opponents to prove that they rate a fight against him by taking on quality opposition.

This no doubt is a case where Mayweather is taking a shot at Khan for the three soft fights he’s taken since his back to back losses to Danny Garcia and Lamont Peterson a couple of years ago.

Khan backed away from true top tier opposition and has beaten the following fighters in the last two years: lightweight Carlos Molina, Julio Diaz and Luis Collazo. None of them were truly relevant fighters at the time that Khan fought them, even though Collazo was technically ranked high based on a win over Victor Ortiz.

“He (Amir Khan) knows that the fight between us can still happen,” Mayweather said to the Dailymail.co.uk. “He is an exciting young fighter – but I don’t just fight anybody – they have to prove themselves. If you ask me will the fight happen – then I would say yes. I hope next year – but these fights are always about timing. I saw the comments where he thought Manny would give him a tougher fight than me. I have no response to that. I will just remind him of those comments after I have beaten him.”

It’ll be good if Khan would break out of his cycle of facing weak opposition and finally step it up a level against a real quality fighter like Keith Thurman. Obviously, that fights not going to happen.

Khan’s adviser Al Haymon is reportedly looking at matching him against Devon Alexander or Robert Guerrero in Khan’s next fight on December 6th. In other words, Khan will be fighting either Mayweather’s leftovers in Guerrero or Shawn Porter’s left overs in Alexander.

I don’t think either are big enough fights for Khan to get Mayweather, but you can understand why Khan might want to fight them. They’re less risky than Porter or Thurman. I know Porter just lost his last fight, but I still rate him higher than Guerrero or Alexander in a fight against Khan.