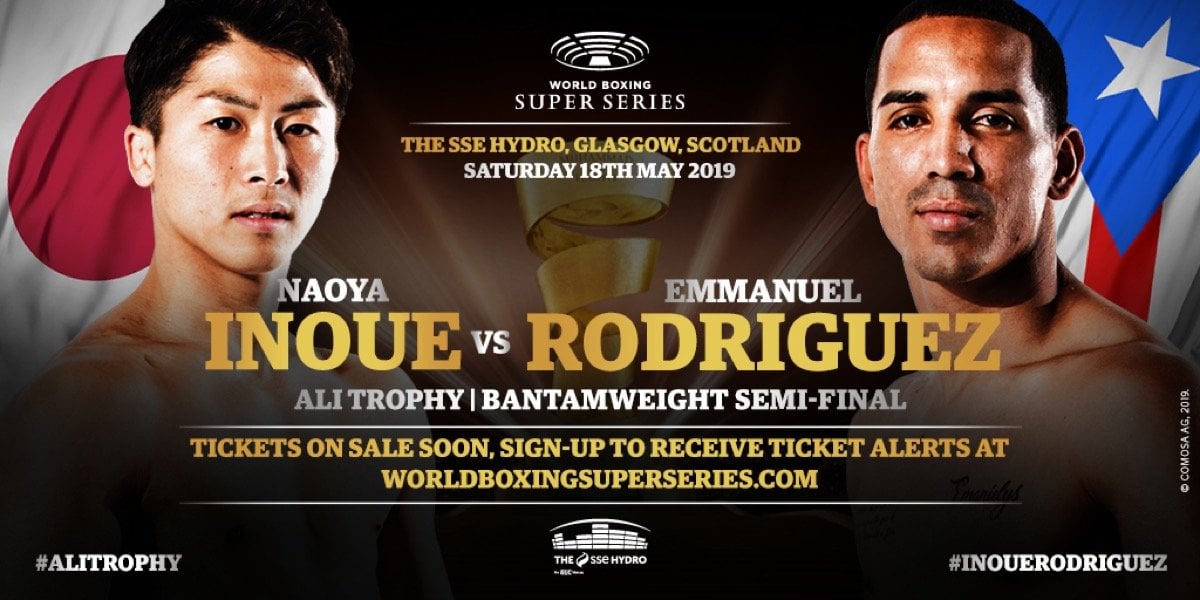 May 18th of this year could turn out to be some night of boxing, period. But if you are a lover of a violent and chillingly executed KO, then May 18th could really be your night. As has already been announced, Japanese “Monster” Naoya Inoue will fight fellow unbeaten Emmanuel Rodriguez in Glasgow, Scotland that night; the fight a semi-final in the World Boxing Super Series bantamweight tournament.

And that same night, in New York, heavyweight monster puncher Deontay Wilder will face Tyson Fury in their eagerly awaited rematch. Pound-for-Pound, Inoue, 17-0(15) and coming off two stunningly efficient first-round KO’s, and Wilder, 40-0-1(39), who is coming off THAT draw, might be the two hardest punchers in the sport today. Between them, the 118 pounder and the approx 212 pounder have given us some truly special displays of punching.

Inoue is really something special and fight fans in attendance in Glasgow on May 18 could be in store for something frightening; maybe frightening enough for the passionate Scottish fans to leave the arena talking as much about Inoue as they chat about their hero Josh Taylor (who will also take part in a WBSS semi-final, against Ivan Baranchyk). Can Inoue take out Rodriguez the way he took out Jamie McDonnell and, last time out Juan Carlos Payano? Do not bet against it.

Wilder, as ferociously powerful as he undeniably is, could well have a much tougher, trickier night ahead of him in May. Fury out-boxed Wilder for long stretches of the December fight and many fans and experts felt “The Gypsy King” had done enough after the 12 rounds were complete to have had his arm raised. Instead, both men had their arms raised. But the talking point of the fight aside from the controversial nature of the official scoring, was the heavy, heavy knockdown Wilder scored in the very last round.

It was nothing short of a miracle, many people said, that a seemingly comatose Fury got back up and somehow saw out the remainder of the round. But can Wilder lower the boom and keep Fury nailed to the mat this time? The sequel is set to be officially announced in London on Monday, and fans will get confirmation of how there will be two huge events, both featuring huge punchers (arguably the hugest in the entire sport today) set for the same day.

New York and Glasgow: two venues, both set to witness raw power. Can Inoue and Wilder each score a memorable knockout or stoppage, or will boxers Rodriguez and Fury spoil the KO party?