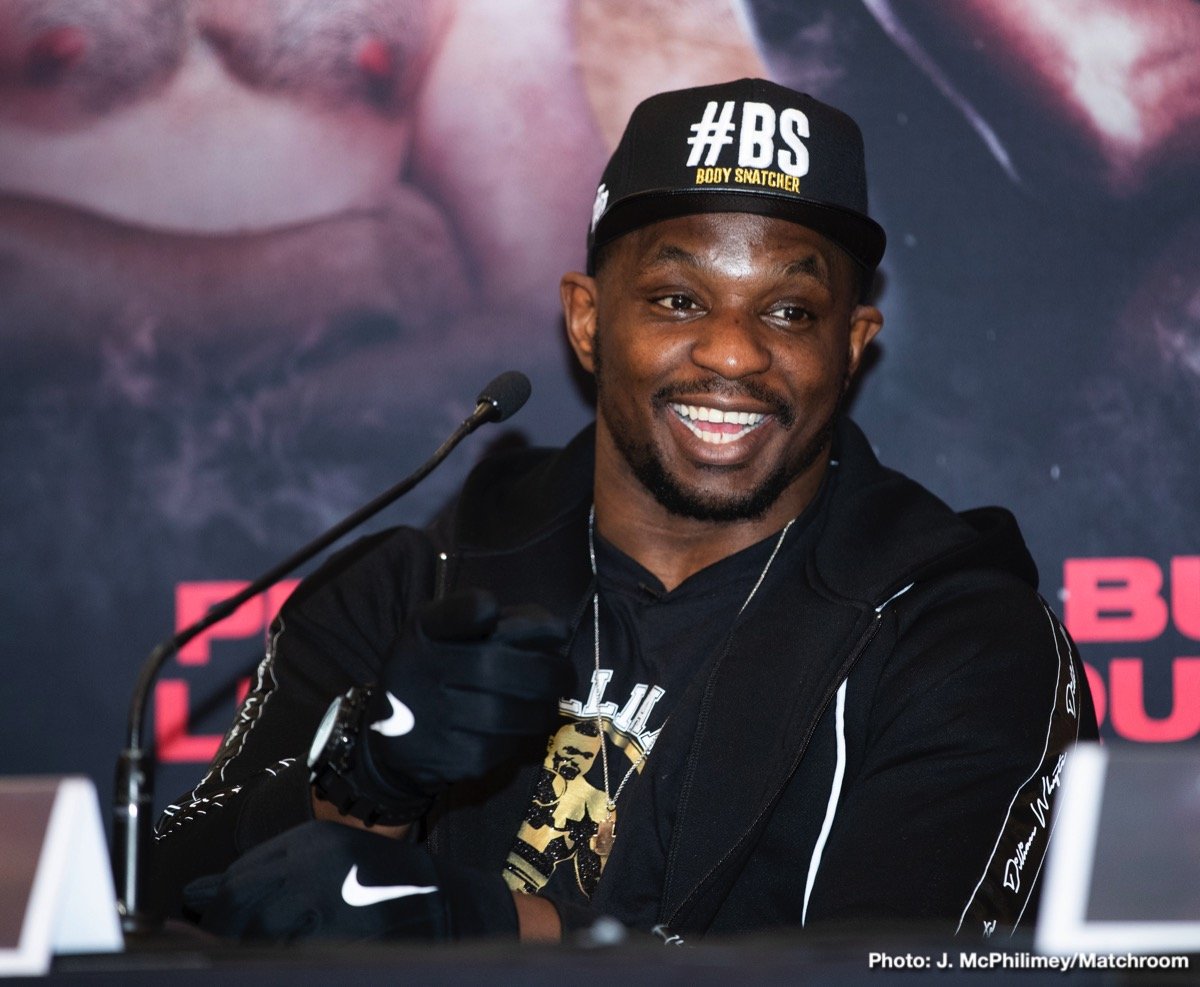 Dillian Whyte believes he’s got a good chance to contend for the WBC heavyweight title in December against the winner of the May 18 fight between WBC belt holder Deontay Wilder and Tyson Fury.

Whyte (25-1, 18 KOs) sees his World Boxing Council ordered match against Dominic ‘Trouble’ Breazeale (20-1, 18 KOs) as little more than a bump in the road in his path to a title shot against the Wilder-Fury II winner. Whyte, 30, will be facing Breazeale for the interim WBC title after the WBC ordered the two of them to fight for the strap.

As the WBC mandatory challenger, Breazeale, 33, had been planning on waiting to get the winner of the Wilder vs. Fury fight. However, Whyte’s promoter Eddie Hearn of Matchroom Boxing proved that the squeaky wheel can get some grease with him complaining that Dillian had been ranked #1 with the WBC for close to two years, and therefore he deserved to bet the mandatory challenger for the WBC champion Wilder rather than Breazeale.

The WBC didn’t grant Hearn his wish of installing Whyte as their mandatory, but they did order the Dillian vs. Breazeale fight for the interim WBC title. This is in effect creates a second WBC title eliminator. Whyte doesn’t mind, because he now has a path to get a the winner of the Wilder-Fury 2 rematch, as long as he beats Breazeale, and the WBC then orders the fight immediately after.

“It’s just good to be in the position to face the winner of Wilder or Fury, whoever wins,” Whyte said to skysports.com.“I’m one of the top four in the world and it’s about time I get what I deserve and what I’ve worked hard for.”

In the last couple of years, Whyte has beaten these guys: Joseph Parker, Dereck Chisora, Lucas ‘Big Daddy’ Browne, Robert Helenius and Malcolm Tann. Of those fighters, Helenius, Browne, Chisora and Tann are limited guys and not considered to be elite heavyweights. If you eliminate them, you’re left with Parker. Whyte did beat Parker. That was by far the best win for Whyte, but it was a close fight. A head-butt knockdown by Whyte should have been waived off. It was a good head-butt though, but bad call by the referee Ian John Lewis.

Whyte is putting himself among these heavyweights: Wilder, Anthony Joshua and Tyson Fury. You can argue that Luis ‘King Kong’ Ortiz rates to be in that bunch as well, possibly above Whyte. Ortiz’s performance against Wilder showed that he’s capable of beating the best in the heavyweight division.

“If the winner of the Wilder-Fury fight doesn’t get injured, then yeah, interim title in June or July, fight for the world title in December. What a year that would be,” Whyte said.

It’s hard to imagine that the Wilder vs. Fury 2 winner will give Matchroom boss Eddie Hearn his wish by taking on Whyte in December. It’s possible that fight will happen, but not if the winner of the Wilder-Fury fight drag their feet and decide to face each other again. Hearn can make a huge unification fight Joshua and the Wilder vs. Fury winner, but that would require for him to give them the 50-50 purse split that they’re asking for. Hearn might reject their request, and then hope the WBC will order the Whyte fight for the World Boxing Council strap. Whyte would be the pressure guy to get Wilder or Fury to come to the bargaining table and agree to the 60-40 offer from Hearn for the Joshua fight. The Wilder vs. Fury 2 winner can always tell Hearn to get lost, and then turn around and either face each other again defend the WBC title against Whyte. Hearn will love it if they face Whyte, because that’s a fight that could end up on DAZN if he out-bids their promoter when it goes to a purse bid.