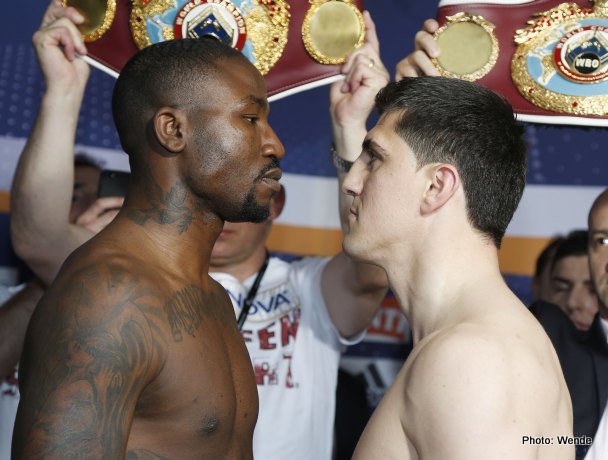 In their three previous, close-fought battles, Huck has won twice on the judges’ scorecards while a draw was declared in their 2012 bout. All previous 36 rounds between Afolabi and Huck have featured excellent two-way action.

A press conference was held yesterday at the venue for the highly anticipated fourth matchup between the two combatants.

Ola Afolabi:
“We have been in this situation on three previous occasions. Every time we squared off it was a real barn burner. It will the same on February 27. I am in the comfortable situation that I am the champion this time round and he is the challenger. Marco is the one trying to take my belt. I wish him luck, but that won’t help him.”

Marco Huck:
“This is the most important fight of my career. I want to prove it to everyone who has written me off after the loss. Hence the theme of the fight is ‘Huck Reloaded’. I will start from zero and have to fight my way back to the top – where I belong. You can always lose but you have to get back up again, that is how you can show that you are a real champion. I might have lost a battle but I will definitely win the war.”

On November 5, Afolabi traveled to Kazan, Russia where he stopped Chakhkiev in the fifth rounder of their scheduled twelve rounder.

Huck made his United States debut on August 14, 2015 in an epic, “Fight of the Year” nominated clash against Krzysztof Glowacki in Newark, New Jersey. Dropping Glowacki in the sixth, Huck would be stopped in the eleventh for only the third loss in his 11-year career.

Marco Huck: “In my last fight I didn`t show what I able to do. I beat myself against Glowacki. It won’t happen again. I’m getting ready with my new coach for the fight on Feb 27. I will be in top condition this time. Ola and I fought three very hard and close fights in the past, which were all decided in the last rounds. But now I want to end this chapter with an early KO victory an end it once and for all.”

Ola Afol Abi: ” I am very pleased to fight against Huck again. Our previous battles were all very exciting and close. This time though, there is a big difference: I am the reigning world champion and he is the challenger. I will defend my title, because I am at the peak of my career. Huck will get what Rakhim Chakhkiev got.”

The fight will be broadcast live in Germany by RTL. Tickets for the event on 27. February in the Gerry Weber Stadium are available on www.gerryweber-world.de

A Press Conference will be held in the next week.