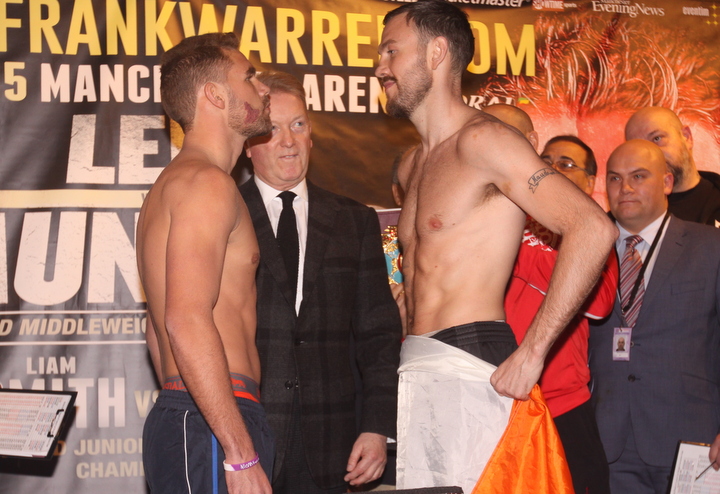 This Saturday night live on BoxNation (Showtime Extreme in U.S.) Andy Lee and Billy Joe Saunders take center stage at the Manchester Arena. Lee is the more accomplished fighter with real one-punch knockout power. Saunders is unbeaten and will need to use his skills rather than heart to secure the victory. Both fighters come from traveling backgrounds so the WBO belt comes secondary to pride and heritage.

Andy Lee was known in America as an up-and-coming prospect that would take the country by storm via HBO. With the backing of legendary Kronk Gym trainer Emanuel Steward (RIP) in his corner Lee was on the fast-track to fame. Steward claimed he was the best boxer he had trained during sparring sessions and it was just a matter of time before the Irishman would transfer that talent to fight night.

Lee landed a spot on HBO versus a brawler in Brian Vera in the spring of 2008 were he scored a knockdown in round one but threw caution to the wind for the rest of the fight. By Lee over exerting himself, Vera began to land hard shots on the undefeated prospect. Lee would ultimately get stopped in the seventh round, albeit by controversial stoppage. No matter how poor the stoppage was it saved him from taking more punishment and taught the young boxer a thing or two about the professional ranks.

His next big HBO break came versus Julio Cesar Chavez Jr. and even in TKO defeat, showed flashes of being a contender. Lee took the hard-road to get where he is today scoring a few knockouts in bouts he was behind on the scorecards. Andy made history by defeating Matt Korobov to become the first traveling man to win a world championship. His draw with Peter Quillin was impressive considering he was knocked down twice early. Now only Saunders stands in his way of landing massive fights with Gennady Golovkin or Daniel Jacobs.

Billie Joe Saunders is a quality fighter who has been tested as a prospect on his climb up the ranks at 160. His biggest victory came against Chris Eubank Jr. and now his sights are set on becoming a world champion. Saunders is a bit undervalued as a competent boxer in the middle of the ring. His faints and crisp jab troubled Eubank Jr. forcing him to be mostly inactive until later in their contest.

Many people who favor Saunders point to Andy Lee’s performances early in fights and see him as lucky to have scored three come-from-behind knockouts. That fact combined with being stopped twice could mean his luck is about to dry up against the faster-handed and fresher Billy Joe. The point is well taken and there’s no doubt that Andy will have to start faster in the early stages.

With that said, a point could be made that Saunders has been in three close fights against lesser opposition. Beyond the Eubank Jr. snoozer, one could point to his close battles with Nick Blackwell and John Ryder as a sign of things to come. Which brings us to Saturday’s intriguing battle in front of what will be a lively Manchester Arena crowd. Just the matchup alone of two-travelers fighting for a world title creates history.

Saunders has a great amateur pedigree as does Andy Lee so both men will be looking to set the tone early with a jab. Billy Joe has a “superb” jab and will defiantly need it to establish punching range. A smart game plan matched with faints and activity will be a key in building a lead on the judge’s cards. Saunders will likely be hesitant because of Lee’s power so expect him to use movement instead of aggression.

For Andy Lee his height and length will be a major advantage in his favor if he chooses to use them. Slight movement in the form of a pivot and a stiff jab will do wonders. The question of will he get carried away in an attempt to put on a show and hamper his performance is a fair one. The respect around the world for Andy is at an all-time high. Will he believe the hype enough to abandon what got him here? The crowd will be in Lee’s corner to an extent and as we know that could make a difference in tightly contested affair.

This fight will start relatively slow but once a bomb is landed look for both combatants to turn up the heat. Saunders will land behind the jab but his lack of power will rise to the surface. Once Andy takes his best shot look for Lee to unload his hooks and uppercuts. Saunders has a habit of holding his hands up either too high or too low and tends to stand in punching range. Lee will attack the body first and then finish his two-punch combos to the head.

As the fight wears on Saunders will dig deep and get desperate which places Lee in a comfort-zone by counter-punching. Lee’s experience in big fights will help him weather the rough spots. Those tight-decision wins from Saunders will serve as a blueprint for Lee. In a fight that gets better as the rounds go on, Andy Lee will advance in the unofficial middleweight round-robin of sorts that’s taken place in 2015.

My official prediction is Andy Lee by late stoppage or majority decision.

Side Note: Make sure you tune in to the HBO Tripleheader this Saturday night. Heavyweight contender Bryant Jennings and the unbeaten Luis Ortiz square-off in a pick’em fight. Jennings is the more seasoned fighter having recently showed his worth last spring versus than unified champion Wladimir Klitschko. Ortiz packs a punch but will he be as explosive without P.E.D’s in his system with both fighters undergoing VADA drug testing. Also, Joshua Clottey returns against Gabriel Rosado in a crossroads bout and Jason Sosa takes on heavy-hitter Nicholas Walters. Spike TV has an interesting fight on Friday night as well when a Top Rank fighter in Denis Shafikov and an Al Haymon client Rances Barthelemy fight for Barthelemy’s IBF 135 trinket. If you’re a betting person you may want to take a flyer out on the underdogs this weekend.

Written by Chris Carlson Producer and Host of Rope-A-Dope-Radio blogtalkradio.com/roleadoperadio