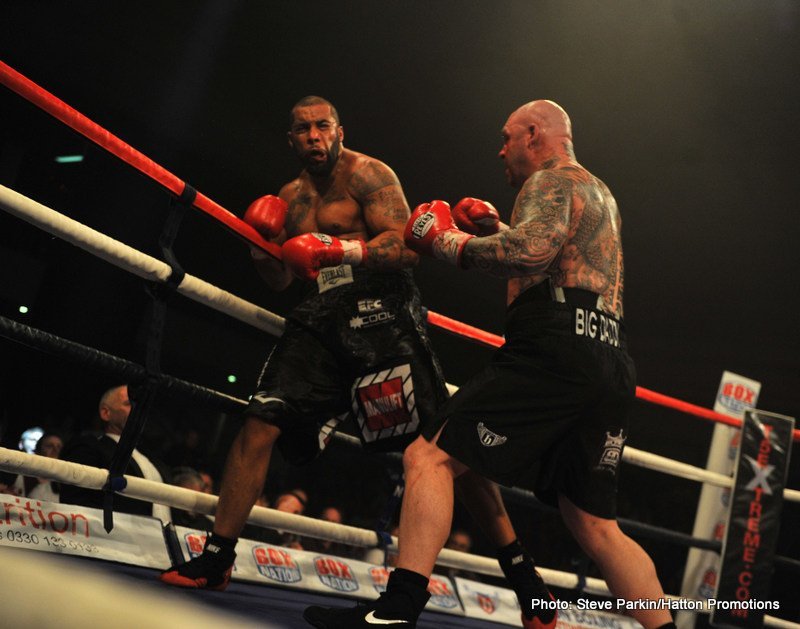 Tonight in Sheffield, Australian heavyweight giant Lucas Browne won the vacant Commonwealth title with an exciting 5th-round KO over Canada’s Eric Martel Bahoeli. Browne’s Sunday punch, his big right hand, got the job done, as Bahoeli was clubbed to the floor whilst stuck in a corner. The time was one-minute and 26-seconds. Browne is now 20-0(17). Bahoeli, the younger man by three year at age 32, is now 10-4(7).

There was plenty of drama to keep the fans on the edge of their seat before the ending. Browne, stalking a moving target, looked to unload his power punches, with Bahoeli boxing well, landing some shots with his fast hands. The difference in power and strength was obvious however, and sure enough Browne, known as “Big Daddy” broke though in the 2nd. A looping right hand decked Bahoeli and it looked as though the fight was over with.

But the Candian beat the count and fought back. In the 3rd, a clash of heads left Browne with a vicious cut over his left eye. Pouring blood, the Australian man mountain was struggling to see. Spurred on by the injury, the younger man went on the attack, even backing Browne up briefly.

Going for the finish in the 4th, Browne again decked his man with a right hand. But Baholei, showing real heart, again got up and then fought fire with fire as best he could. It was terrific action and the fans loved it. Then, in the 5th, his face covered in blood, Browne closed the show with his big right, an uppercut to the head being the final shot.

Promoter Ricky Hatton promised fans an exciting battle leading into tonight’s scrap and Browne, slow afoot and plodding, delivered courtesy of his raw power. Now aiming for the bigger names, Browne will likely have to take a number of weeks off to allow the bad cut to heal.