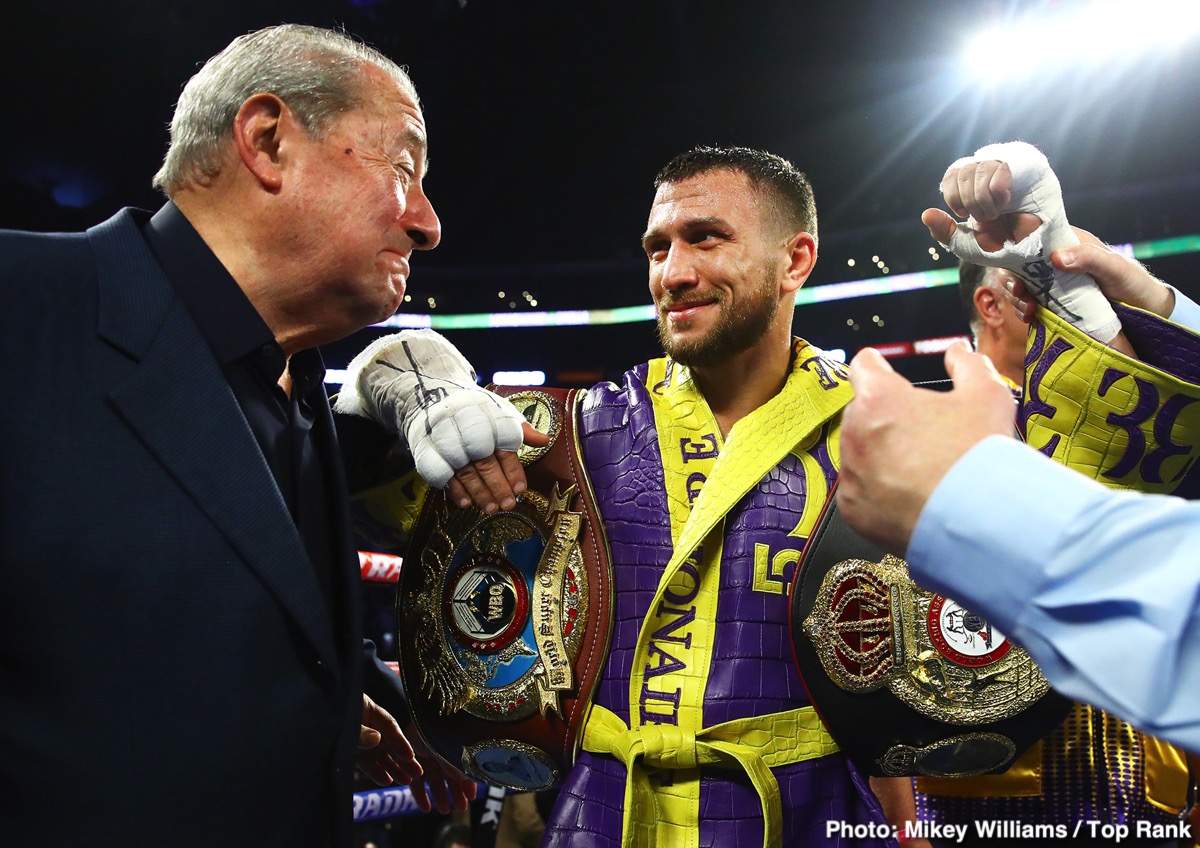 The former three-division world champion Lomachenko (16-2, 11 KOs) is prepared to step in and face the boastful Australian Kambosos (20-0, 10 KOs) in his own country to dethrone him inside a stadium.

Lomachenko, 33, has turned his career around since losing his three lightweight titles to Teofimo Lopez on October 17th, 2020. In Lomachenko’s two fights since then, he’s beaten former Teofimo foes Masayoshi Nakatani and Richard Commey.

All Lomachenko needs now to regain his throne as the #1 fighter in the 135-lb division is a victory over the 28-year-old Kambosos, but that not be easy.

Matchroom Boxing promoter Eddie Hearn has jumped ahead of Lomachenko and Arum, working tirelessly to hammer out a deal for his fighter WBC lightweight champion Devin Haney to face Kambosos Jr. in April in Australi.

“Lomachenko wants to fight Kambosos, and we want to do that fight in Australia,” said Top Rank head honcho Bob Arum to World Boxing News.

Read:  Alen Babic Gives Us Another Wild One With Tough Win Over Balski - Boxing Results

“We can raise a lot of money to do that fight, but we can’t do it in the face of Covid. The government won’t give us money with Covid rampaging now through Australia.

“I’d like to do the fight in Sydney. We’ve explored ways that it could be done. I’m very optimistic,” said Arum.

It doesn’t look things are going smoothly in the negotiations, however, as Haney took to social media last Sunday to complain about the glacially slow pace of the talks. Haney specifically believes that Kambosos may be having second thoughts about taking the fight and could be “ducking” him.

Kambosos is one of those guys that lucked out with a victory that likely would have never gotten had Teofimo Lopez not been injured and weight drained for their fight on November 27th.

In the only two rounds in which Teofimo showed energy in the first and tenth, he had Kambosos reeling, looking weak, as he was expected to look given his low KO percentage and mediocre past opposition.

Ultimately, Kambosos won the fight by a 12 round split decision, but he looked beatable throughout. It was more of a case of how bad Teofimo was that night rather than how great Kambosos was.

Kambosos was able to take advantage of Teofimo having little energy due to the weight cut to get down to 135 and the injury that he came into the fight with.

The weakness that Kambosos showed against Teofimo has made him a target for promoters like Eddie Hearn and Arum, as they can turn their fighters into stars by beating him.

For Hearn, he must make the fight for Haney because he’s failed to increase his popularity, and he’s looked very, very shakey in his last couple of fights against Jorge Linares and Joseph ‘Jojo’ Diaz Jr.

Looking at Haney’s performances lately, it’s apparent that he’s not going to remain unbeaten for much longer. But with that said, Haney doesn’t need to be great for him to beat Kambosos because this guy is a vulnerable champion and food for him and other lightweights in the division.

Haney, 23, has already said that he plans on moving up to 140 after his fight with Kambosos if it happens. This might be it for Haney at 135, which is another reason why Hearn needs to go all out to try and make the fight happen.