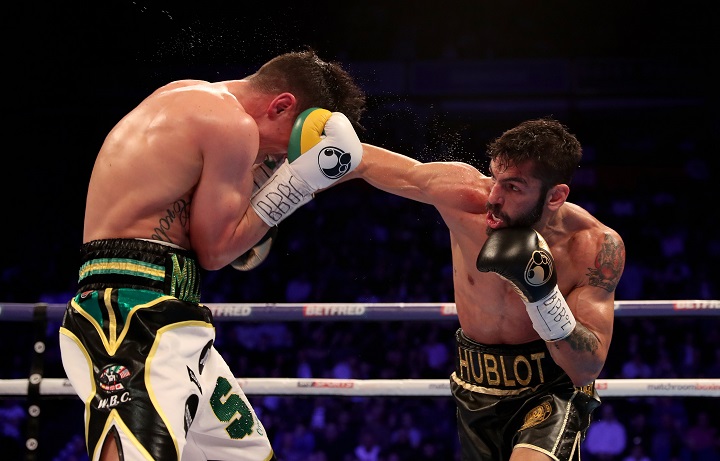 Jorge Linares defended his WBA Lightweight World Championship with a unanimous decision victory over Anthony Crolla Saturday evening on SHOWTIME BOXING INTERNATIONAL from Manchester, England. The win sets Linares up for a possible unification fight with WBC Lightweight World Champion Mikey Garcia, a matchup that would be considered one of the best that can be made in any weight class.

Linares and Crolla previously fought a fierce, closely contested battle last September, one that Linares won by just a few rounds. On Saturday, Linares retained the belt by a wide margin—118-109 on all three scorecards—virtually outclassing Crolla from the outset.

“He seems to be getting better with age,” said Froch, sharing a growing sentiment among boxing pundits.

Linares (42-3, 27 KO’s) cruised through much of the fight with an impressive display of boxing skill and power. A precisely timed uppercut floored Crolla in the seventh. Moments later Linares nearly finished him with a flurry against the ropes. Crolla, however, would not go quietly. The Manchester native, perhaps spurned by his home crowd, bravely grew more aggressive in the second half of the fight. But Linares was simply too sharp, too fast and too comfortable for Crolla to overcome.

Mikey Garcia is coming off a brilliant knockout of world champion Dejan Zlaticanin in January and is hungry for a unification bout.

“First off, I congratulate Jorge Linares for a great win,” said Garcia. “His skill, flexibility, combinations and power were definitely impressive. I hope we can make a fight as soon as possible. He didn’t look cut or hurt so maybe we can fight this summer.”