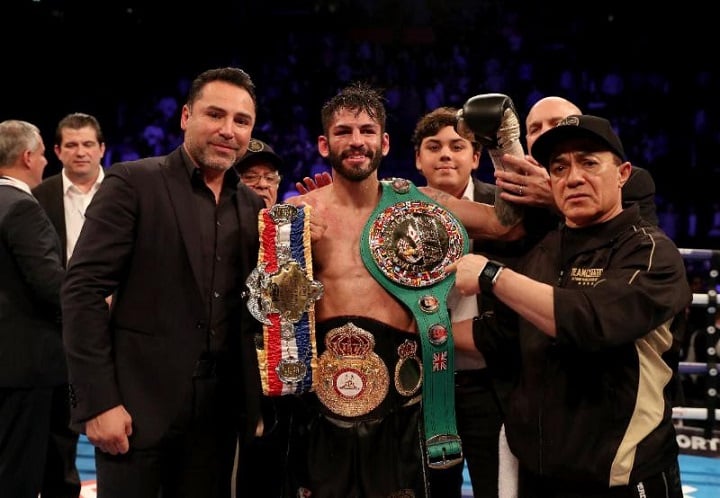 Crolla showed great heart throughout the 12-round fight; Linares, however, showed even greater skill, swift footwork, speed and control to win the fight by unanimous decision, with all three judges scoring it 118-109.

In the beginning, Linares controlled rounds one and two with his jab and out-punched Crolla. Linares continued the trend through round four, controlling with his jab and using his footwork to keep Crolla at a comfortable distance. Round five intensified with both fighters throwing more punches, but it was in round seven when Linares dropped Crolla with a swift, left uppercut that it became evident he was poised to win the fight.

By round eight, both fighters worked the body with Crolla fighting back harder than previous rounds, cheered on heavily by the pro-Crolla crowd. In the final rounds, Crolla countered back throwing more punches but ultimately could not overcome Linares.

Linares vs. Crolla II was a 12-round lightweight bout for the WBC Diamond, WBA and Ring Magazine Lightweight World Championship on March 25 at the Manchester Arena presented by Matchroom Boxing in association with Golden Boy Promotions and sponsored by Betfred.

Two EBU-EU titles were on the line in Helsinki, Finland on 25th March, as Juho Haapoja (28–7–2) and Leonardo Bruzzese (17–3) fought for the cruiserweight title and Petteri Fröjdholm (11–1) and Faroukh Kourbanov (13–0) clashed for the super featherweight belt. The undercard featured five four-round fights.

Juho Haapoja seized the cruiserweight title in a slugfest. The ever-aggressive Haapoja pushed forward and threw power punches from the opening bell, which seemed to intimidate the Italian. The taller Bruzzese tried to establish his jab in the second round but with little effect. Haapoja rattled his opponent with a hard overhand right at the end of the third and again in the fourth round, but Bruzzese shook it off and looked sharper in the fifth.

Throughout the fight Haapoja’s coach CJ Hussein was heard urging his man to aim for the body. Haapoja indeed had success throwing jabs downstairs and continuing with right hooks to the head. In the sixth round Haapoja connected with several left hooks, but Bruzzese had his moments as well. In the ninth Bruzzese began to soften up, but his chin proved to be surprisingly strong.

Haapoja threw a few hooks under the beltline in the final rounds, which gave Bruzzese time to breathe as referee halted the fight momentarily. In the 12th round Bruzzese seemed ready to collapse, but the Italian managed to clinch his way to the final bell. The scores were 117–111, 117–111 and 119–109 for Haapoja.

Petteri Fröjdholm and Faroukh Kourbanov went the distance as well, and in the end it was Kourbanov who won the title with a majority decision.

The fight began as a chess match with Fröjdholm using uppercuts to counter the taller Kourbanov’s punches. This strategy proved to be quite effective in the early rounds, but as the fight progressed, the momentum started to swift.

Kourbanov caught Fröjdholm with some good body punches in the middle rounds, and the Finn began to tire. The Belgian smelled blood and started to press harder hurting Fröjdholm with hard shots to the head at the end of the eighth.

Kourbanov continued to rally in the ninth and tenth rounds, but the brave Finn showed heart and fought valiantly to the end. The final round was an even battle with Fröjdholm giving everything he had while Kourbanov pressed on. The scores were 113–115 and 113-115 for Kourbanov with one judge scoring the fight even 114–114.

Oskari Metz (2–0) gave Dimitrije Djordjevic (0–5) a battering in a welterweight contest. Djordjevic came out swinging, but Metz figured him out quickly and started to pick his opponent apart with uppercuts and left hooks. Djordjevic fought for survival from the second round on. Metz switched to body shots in the third and looked for a KO in the fourth, but the resilient Serb managed to make it to the final bell. Metz was seen grinning widely through the final round.

In a super bantamweight fight, Aleksandar Veljkovic (0–1) had little to offer against Jose Antonio Sanchez Romero (5–0–1). Veljkovic tried to catch his man with left hooks, but Sanchez seized control quickly and peppered his opponent with wide variety of punches. Veljkovic went down at the end of the first round from a hard left hook to the body, and referee saw no reason to let the one-sided hammering continue.

The welterweight contest between Antti Hietala (0–0–1) and Novak Radulovic (1–0–1) featured two fighters with bad intentions. Hietala, a three-time national champion in the amateurs, was eager to make a statement, but Radulovic was no pushover. It was an action-packed fight from the opening bell as both landed power shots.

Radulovic snapped Hietala’s head back with a hard right hand in the second round. In the third Hietala began to show his ring intelligence scoring with several sneaky hooks and counterpunches. The Serb pressed hard in the fourth as Hietala seemed to tire. One judge gave the fight to Radulovic, one to Hietala and one had it a draw, so the final verdict was a split draw.

The heavyweight bout between Niklas Hyvärinen (2–0) and Lazar Stojanovic (0–2) was an even contest. Stojanovic went down in the first round from what looked like a slip but which was ruled as a knockdown. Stojanovic came back strong in the second scoring with several hard shots. The fighters stood forehead against forehead for the last two rounds looking for openings. Hyvärinen was the more active of the two, but Stojanovic landed cleaner shots. In the end all three judges scored the fight for Hyvärinen.

The event was promoted by Dominus Boxing Group with Viaplay providing the live stream. Dominus Boxing Group’s next event will be held at Gatorade Center in Turku, Finland on 6th May, as EBU lightweight champion Edis Tatli defends his title against Belgian Francesco Patera.