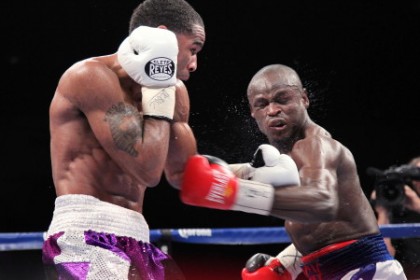 “Many people questioned how I would be mentally and physically after the [Lucas] Matthysse (34-3, 32 KOs, 1 NC) fight, but I showed tonight that I’m over that loss and I’m right back where I was before the loss,” Peterson said. “I stuck to game plan tonight and I was pleased with my performance, especially with all the hometown fans coming out and supporting me.”

The win marks Peterson’s second successful title defense of the IBF Jr. Welterweight World Championship and he remains undefeated at home in DC. With thousands of local fight fans in attendance chanting, “Peterson”, “DC”, and “USA”, one wonders why Peterson would fight anywhere else.

“If it was up to me I’d never leave [D.C.]. I love my city and my city loves me,” Peterson proclaimed in his post-fight interview.

As for what’s next, in his post-fight presser, Peterson mentioned a possible unification bout with Danny Garcia (27-0, 16 KOs; WBA, WBC, RING Champion). If Garcia has other plans, a move up to the deep and talented pool of Welterweights is not out of the question.