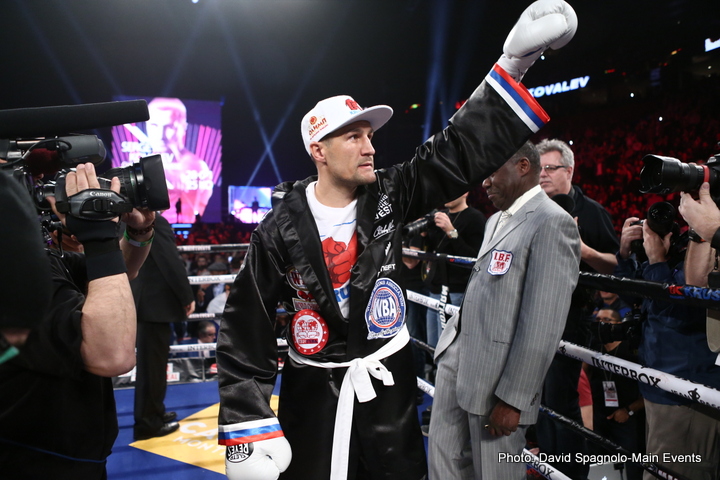 A gleeful sounding IBF/WBA/WBO light heavyweight champion Sergey Kovalev (29-0-1, 26 KOs) boasted about his 7th round knockout win over the faded looking Jean Pascal (30-4-1, 17 KOs) last night in their rematch at the Bell Centre in Montreal, Canada. Kovalev, 32, stated after the fight that he broke Pascal’s nose with what he believes was a left hand.

“I hurt my left hand a little from a very hard punch. I broke his nose, maybe that is when I hurt my hand. I don’t like him. I punish him,” Kovalev said.

If Pascal did suffer a broken nose, he’s going to be out of action for while until it heals up. That might be a good thing for Pascal, because he’s taking beatings in his last three fights against Kovalev x 2 and Yunieski Gonzalez. Technically, Pascal lost 2 out of the 3 fights, but many boxing fans believe that he also lost to Gonzalez. I thought Gonzalez was robbed against Pascal last year in July. The more important thing than the results of those fights is the horrible punishment Pascal has taken in those three fights. It was a career’s worth. Pascal should think about taking some time off and giving his body and head time to rest from those beatings before he gets back in the ring again.

“I don’t think Freddie Roach changed him at all. He was actually easier for me. I hurt his ego the most because they stopped the fight when he was sitting in the corner on the bench,” Kovalev said.

There’s something to be said about the limitations of a trainer like Roach. He did well with Manny Pacquiao, who came to him already an incredibly talented fighter. But when Roach has had to improve on a finished fighter like Pascal and Miguel Cotto, the results are largely negligible.