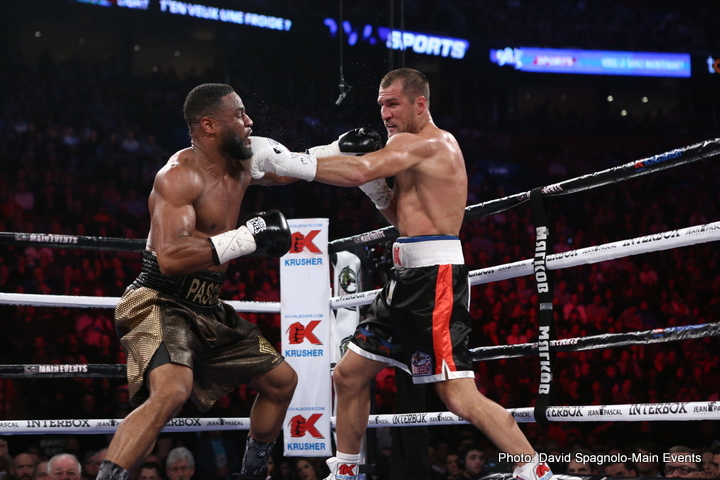 Nothing unexpected, but still a feeling of mild astonishment when once again we witness the power and skill of Sergey “Kusher” Kovalev (29-0-1 17KO). He seems to excel at all aspects of the sweet science. His balance is good. He controls distance. He has a knockdown type jab and decent speed. He throws sizzling combinations, started with either hand. His punches are thrown with precise accuracy. His defense is good, and if he is hit with a counter punch, the effect is lessened by the fact that he sees them coming (focus), which makes him ready for the impact. Then of course there’s his power. Undoubtedly fans jammed into the Bell Centre, Montreal, Quebec, Canada and viewers tuned into HBO’s telecast were wincing with the impact of each of Krusher’s destructive punches .

Jean Pascal (30-4-1 17KO) resembled a play-doe like recipient. He was being reshaped right before our eyes…….a dent here, a dimple there, and lot’s of lumps and bumps. Hard shots to the body were accompanied by gasps from the crowd. Pascal’s kidneys and the pit of his stomach undoubtedly were the source of stabbing pains. His brain must have been in torment and agony, but his warrior spirit kept him from total despair. He pleaded with trainers Freddie Roach and Russ Anber to let him go out for one more round. All that was left was the suffering. Russ seemed to be tearing up. Freddie implored referee Michael Griffin to watch carefully and stop the fight if Kovalev trapped Pascal on the ropes again.

The result was like sending a young man off to war despite the fact that he failed his physical. Kovalev showed no mercy. He kept inflicting further penalty for Pascal’s transgression in calling him a racist. As a result, at the end of the seventh round, Freddie gestured to the referee that Pascal could not continue

In the post-fight interview with Max Kellerman, Kovalev admitted he backed off a few times so he could further punish Pascal. When pressured by Max for an explanation, he simply said, “Pascal is not a good person.” When Max asked what was next? Kovalev said he wanted to unify the title and take Adonis “Chickenson’s” belt. Of course, he was referring to Adonis “Superman” Stevenson.

At the present time it would seem a stretch for that to happen, because of the different bodies involved. There’s HBO, SHOWTIME, Main Event, etc. It’s a shame, but there’s still hope with Andre SOG Ward, and Kovalev seemed okay with that possibility. That’s a better fight anyway, and in a pre-fight interview, Andre Ward said that negotiations are underway. It’s no longer a question of if the fight will happen, Rather, that question seems to have been resolved, so now it’s only when it will happen ….. i.e. 2016 or 2017. Bernard “Alien” Hopkins said it best, “The sooner the better.”