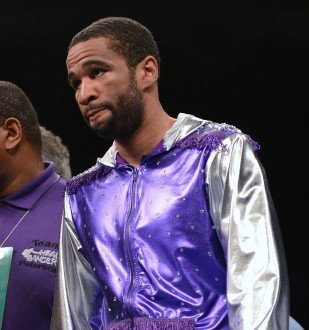 Khan seems like he’s coming from up high in speculating that Peterson will have a difficult time coming back after his knockout loss. It’s not as if Khan has never been knocked out before. Khan’s knockout losses to Breidis Prescott and Danny Garcia were far worse than the one Peterson suffered last night at the hands of Matthysse.

Khan may have to convince Richard Schaefer of Golden Boy Promotions that it’s a good idea for him to stay at 140 rather than moving up to fight Floyd Mayweather Jr. or Devon Alexander at 147.

The choice seems to be a pretty easy one when you look at it from a logical perspective. If Khan moves up to 147, he might be able to get a $3 million payday against Mayweather.

If he stays down at 140, Khan will likely get one-third of that to face Matthysse, Danny Garcia or Lamont Peterson, and he’s just going to get beaten all of them anyway. He might have a chance to beat Peterson if he can handle the pressure better than he did last time, but I have my doubts he can.

Julio Diaz had Khan staggering around the ring like a drunk and Peterson is a lot better pressure fighter than Diaz. Khan had to hold and shove for 12 rounds against Peterson. Take away the shoving and holding by Khan, and I’d be willing to be he’d get knocked out.