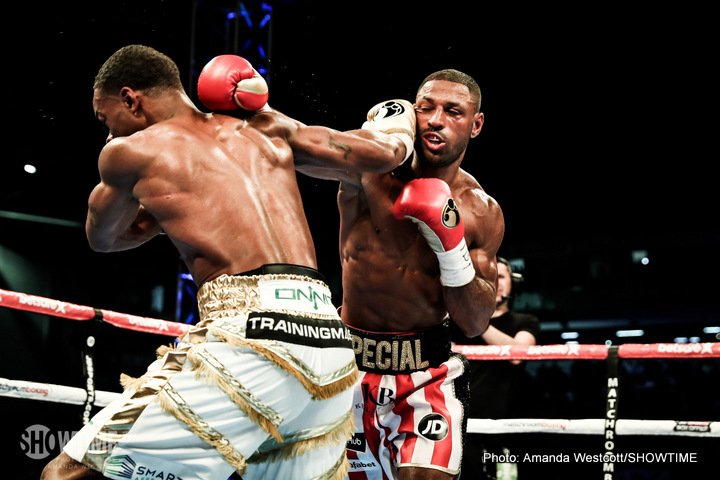 Former IBF welterweight champ Kell Brook could soon be heading to the U.S, for just the third time in his pro career. Brook, who needs a big and impressive win, won the IBF belt in Carson back in 2014 when “The Special One” scored a razor-thin decision over Shawn Porter. Now, according to a news story from ESPN.com, Brook is close to fighting Jessie Vargas, himself a former champion (two-times), at a location to be determined on the West Coast in either late May or early June.

The in-the-works fight would be fought at a catch-weight of between 147 and 150 pounds. Eddie Hearn is hoping to finalize the fight soon. So who wins if the fight does indeed get done?

Brook, 38-2(26) has won two fights since being brutally halted by middleweight champ Gennady Golovkin and then by Errol Spence in the fight that saw Brook lose his welterweight strap – but he did not look good in his last fight, when he labored to a pretty dull decision victory over Michael Zerafa in December. How much has the 32 year old got left?

Vargas, 28-2-2(10) is three years younger than Brook and it could certainly be argued that the former WBA 140 and WBO 147 pound champ has not taken as much punishment and has not been damaged to the extent Brook has. Beaten only by Manny Pacquiao and Tim Bradley, Vargas has never been stopped. Last seen boxing a draw with Thomas Dulorme in his first fight with Hearn, Vargas also took Adrien Broner all the way to a draw in his fight before that.

So although Brook is coming off two wins and Vargas is win-less in his last two, the better form has been shown by the man from Las Vegas. It’s a fine match-up and it could be a good fight between Brook and Vargas – part firefight, part chess-match type affair. How will Brook’s eyes and facial bones hold up? Is Vargas a big enough puncher to be able to trouble Brook? These questions and others could be answered soon.

For the winner there could be a world title shot in the near future. Porter, the reigning WBC welterweight champ, has said he would like a shot at revenge over Brook, so who knows? Vargas has shown he is good enough to be able to tackle just about any welterweight out there.

Vargas is the pick to win here, and if Brook is handed his third defeat it will be tough to see where he goes from there.