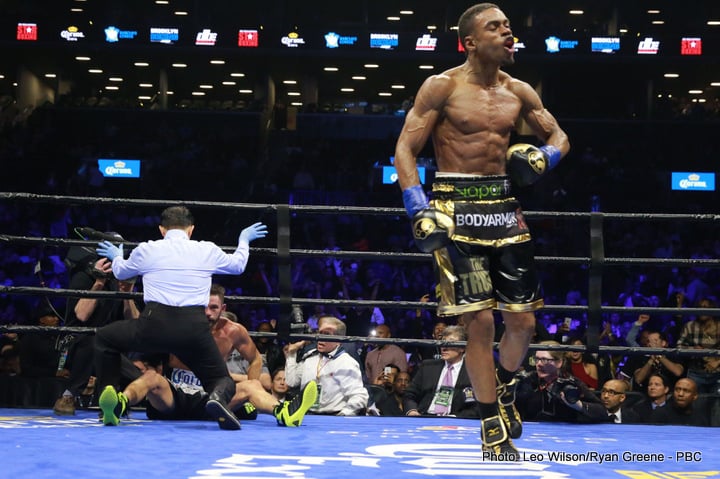 It’s one of the hottest fights between young and gifted welterweights and it could happen in the UK in the first quarter of next year. It’s a Kell Brook-Errol Spence Jnr fight, with IBF ruler Brook defending against mandatory contender Spence. And Brook says he will send the unbeaten Spence home “with his tail between his legs” with a successful defence.

Speaking with IFL TV, Brook – who recently made it clear he has absolutely no intention of vacating his IBF belt – says Spence “has to earn his stripes” and suggests the fight’s purse bids will be won by his promoter Eddie Hearn and the clash will therefore take place in the UK. Having said that, Brook – who won the IBF belt by defeating the tough Shawn Porter by majority decision in the US in August of 2014 – says he would travel to America again if Spence’s team won the purse bids.

“[Spence] has to earn his stripes. I had to go over there to earn the title from Porter,” Brook said. “He has to come over here to get this title off me. If they do win the purse bid, I’m willing to go over there. I’m a champion. I’m willing to fight anywhere to defend what’s rightfully mine. This is the boxing game and if we win the purse bid, which I’m pretty sure we will, he has to come over here. He has to come to England and he has to go [home] with his tail between his legs without that belt.”

Wherever the fight is held, the UK or the US, it will be one well worth watching, even paying for. Spence, 21-0(18) undeniably has that look only the tremendously talented and exciting fighters have, and a number of good judges feel “The Truth” is a superstar in the making. As for Brook, 36-1(25) he showed his bravery, his heart and his courage in his last fight, when he was stopped up at middleweight by Gennady Golovkin. The questions surrounding Brook now are quite plentiful: will the broken eye socket he suffered at the hands of GGG affect him in future bouts? Will Brook be weakened by getting back down to 147? How much did the Golovkin beating take out of his mental game?

Very much a 50-50 fight, Brook-Spence will either see a good champion remain as one as he looks for bigger fights in the future, or the fight will show us a new star arriving at championship level. How will Brook cope with Spence’s speed, accuracy and power? How will Spence cope with Brook’s speed, power and experience? This one could be a special fight.