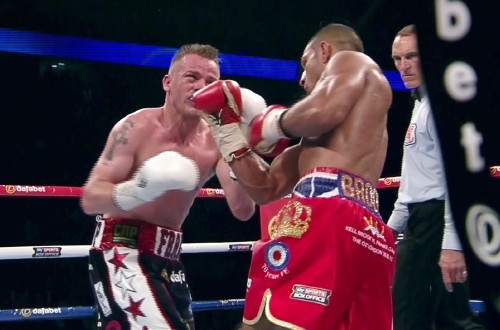 With all that has happened in British and world boxing over the past month or so, unbeaten welterweight Kell Brook, the reigning IBF champion, has almost become a forgotten man. Brook’s ideal big-fight opponent, Amir Khan has signed on for a massive fight with Mexican/global star Saul “Canelo” Alvarez, and the eagerly anticipated Shawn Porter-Keith Thurman fight (that Brook was excited to see and was targeting a showdown with the winner) has been postponed due to a car crash injury suffered by Thurman.

And now, just three weeks ahead of his mandatory defence against Canadian Kevin Bizier, Brook appears to be running out of patience. Brook, 30-years-old in May, is aching for the kind of big fight his considerable talents deserve, and he has told The Sheffield Star that he hopes to have “something concrete” in store very soon when it comes to a big-name foe for his next fight.

“After Bizier I expect something concrete quite quickly, ideally I’d like to know who it is, or that we are close to making an offer [to] when I am sat on the apron immediately after [the win over] Bizier,” Brook said. “It has been a long road but I am excited to get rid of the mandatory and things should open up for me. We will start pushing until we get the people we want, like [Danny] Garcia or [Tim] Bradley or [Manny] Pacquiao. I would certainly be willing to travel to the US for Garcia, that’s a great fight.”

It is indeed and in an ideal world, Brook would get it; or a fight with a Bradley, a Pacquiao or a Thurman or Porter. Oh, hang on, Brook has already fought, and beaten, Porter; the only man to do so. Why then, have the big, big fights proven so elusive for “The Special One?” Brook has not delighted many fans with the two defences he has made since beating Porter to claim the IBF belt – what with his retentions against Jo Jo Dan (a mandatory) and Frankie Gavin (a voluntary) proving disappointing match-ups for a fighter of Brook’s class and star potential.

But Brook wants to keep hold of his IBF belt and he has adhered to the organisation’s mandatory orders; with the Dan fight and next, the Bizier fight. Some fans have said the Sheffield fighter would have been better off binning the IBF strap, so he could be free to go after the name fights he craves. But the belt remains a bargaining tool for Brook and his promoter Eddie Hearn, and like Brook said at a recent press conference, it’s hard giving up something you have worked so hard to earn.

So, will the other welterweights, either the ones who hold titles or those who do not, agree to face Brook later this year? Brook must have pretty much given up on landing the all-British mega-fight with Khan, but there really is no reason a Garcia fight, or a Bradley fight, cannot be made. Brook, much like other seemingly (or shamefully, depending on your view) avoided fighters Guillermo Rigondeaux and Gennady Golovkin, is that rare thing: a possibly great fighter who, though willing to take on all comers, cannot get his hands on the truly meaningful fights.

Let’s hope Brook’s talents do not go largely to waste and that he gets the big fights he deserves soon. As Brook, 35-0(24) knows better than anyone, the clock is ticking.