Look up the great fights, the great fighters at 140 pounds, and you will see some special ones: Aaron Pryor, and his epic first fight with Alexis Arguello, Kostya Tszyu, and his memorable fights with Zab Judah and Ricky Hatton, Wilfred Benitez, and at the forefront, his astonishing win over Antonio Cervantes…… and many more.

Yet for many fight fans, the greatest, most memorable, and most epic 140-pound fight in the history of the division has to be the savage, beautiful, damaging, and ultimately controversial battle all-time great Julio Cesar Chavez and great Meldrick Taylor thrilled the planet with on this day 32 years ago (and yes, Taylor is deserving of being considered a great).

Going in, fans knew this one would not fail, that it would be super-special. And the fight that lasted just TWO SECONDS short of 12 rounds delivered, in spades. Taylor, 24-0-1(14) and a gifted boxer who loved to go into the trenches and go to war, was sizzling with passion, skill, and desire. Chavez, 68-0(55) was a masterful inside fighter who, like all Mexican warriors, was capable of taking more than he gave, was as tough as he was talented. The sport braced for an epic collision, while we fans knew we were lucky to get this fight – a truly once-in-a-lifetime showdown between two in their prime pound-for-pounders.

Dubbed “Thunder and Lighting,” Chavez Vs. Taylor provided both.

Taylor looked to be nothing short of perfect for the majority of the fight; poetry in motion indeed. Fast, as in lightning-fast, Taylor hit Chavez with all manner of shots, up and down. It was a joy to watch, and Taylor was winning the rounds. Yet “Mel” was paying a price in stepping in and working his fast hands in Chavez’s range. Chavez was appearing to be taking a shellacking, yet the Mexican assassin was landing a painful number of damaging blows – thunderous blows – albeit punches that were not as eye-catching as Taylor’s.

Taylor, as we found out later, was suffering as he was winning. Swallowing blood from a cut in his mouth, fighting through the pain and the handicap of a busted orbital bone, suffering from bruised kidneys, and fighting through dehydration, Taylor really was giving it his all. Chavez, behind on the cards but unmarked save for a small cut on his nose, knew he had to pull out something special to avoid defeat. This “El Gran Campion” did in the final round.

Chavez, advancing towards his moving target, stunned Taylor with a right hand to the head. The shot buckled Taylor and then, with Chavez having moved his prey into a corner from which there was no escape, the finest fighter in all of Mexico drilled his fatigued and dazed foe with another, harder right hand. 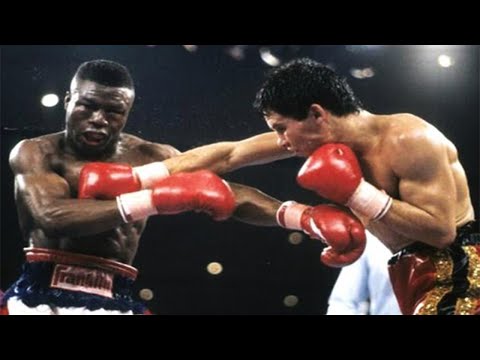 The rest we know.

Taylor went down, he showed immense courage in dragging himself upright (using the ropes to aid his climb) and then this all-but broken warrior was distracted by an animated Lou Duva as referee Richard Steele looked into his eyes in an effort at seeing if the fight should continue.

Duva, his only concern being his stricken but leading fighter, may well have cost his charge the fight. Who knows what might have happened had Steele been convinced by a Taylor who was looking straight at him that he could continue? Instead, with just two clicks left on the clock, Steele waved the fight off as Taylor’s glazed eyes were distracted by his overly passionate corner-man.

Chavez was the TKO winner at 2:58 of the final round.

Fans who were there that night in Vegas will never forget this fight, nor will they ever be able to resist joining in whenever an argument flares up over what would have happened had the fight carried on. While we fans who watched the fight live on TV will never quite be able to let this one go ourselves.

In short, both of these great fighters showed us how magical a boxing match really and truly can be.