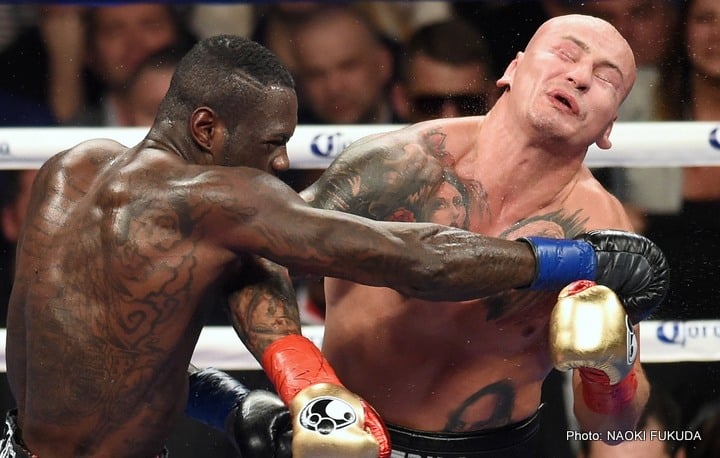 “It’s going to be interesting because we’ve seen Breazeale in a lot of wars. He’s almost been taken out by some of the smaller Heavyweights, he’s been punched around, but he has always survived.

“We’ve seen Joshua has also been busted up as well, but he has kept his composure, and this fight is in his backyard amongst his people.

“I don’t put anything past Breazeale because he’s coming in hustlers’ territory. I think that it’ll be a good fight because of Breazeale – I think he really wants it.”

Wilder makes the fourth defence of his WBC strap on July 16 against Chris Arreola in his hometown of Alabama, and the 30 year old says that Joshua will feel like a different fighter as he goes into his first fight as World champion – but that there’s now an even bigger target on his back.

“For Joshua, this is his first title defence, so he should feel some kind of security about himself and confidence about himself. But he’s going to find out that to continue his career and defend that title, these guys aren’t going to lay down after one punch or after two punches.

READ:
“Scapegoat” Mark Breland Likely To Be Fired From Team-Wilder

Breazeale is following compatriot Charles Martin into Joshua’s Greenwich fortress, where the 2012 Olympic gold medalist is fighting for the seventh time in his pro career. Wilder has boxed outside of the US many times – including his one-round KO of Audley Harrison MBE in Sheffield – and he believes Breazeale’s confidence must be sky-high to travel to Joshua’s backyard.

“It takes a lot of courage, will and heart to fight in someone’s backyard,” said Wilder. “It takes someone that has confidence in themselves. And not to mention going to someone else’s country, because then the environment has completely changed. It’s a big difference and not a lot of guys are willing to travel outside of their country where they would be uncomfortable.

“Only a very few that really want to build their legacy, such as myself, will travel and have no problem. I don’t like to worry about judges or nothing. You go do what you have to do. That’s just my philosophy and mentality as a champion now. When you say the Heavyweight Champion of the World, that’s why this is tough, we travel all over the world.”

Joshua’s clash with Breazeale tops a huge night of boxing at The O2 as George Groves and Martin Murray meet in an eliminator for the WBA World Super-Middleweight title.

The charismatic Wilder (36-0, 35 KOs) will provide commentary and insight from a New York studio along with Barry Tompkins and Steve Farhood before and after the fight.

Coverage of Joshua vs. Breazeale from the sold-out The O2 in London will be provided by Sky Sports with the play-by-play call from Nick Halling, analysis from Jim Watt, additional in-fight analysis from former WBA Heavyweight Champion David Haye, and post-fight interviews from Andy Scott.

An encore presentation of the SHOWTIME BOXING INTERNATIONAL telecast will air later that evening on SHOWTIME at 11 p.m. ET/8 p.m. PT.

The 26-year-old Joshua (16-0, 16 KOs) has compiled a perfect knockout record of 16-0 with 16 knockouts since turning professional shortly after winning the 2012 Olympic Gold Medal. Earlier this year, Joshua earned the IBF Heavyweight World Championship with a second-round knockout of defending champion Charles Martin on SHOWTIME, earning a heavyweight belt in the fewest number of fights in more than 20 years. The showdown with Breazeale is Joshua’s first since signing a multi-fight licensing agreement for Showtime Networks Inc., to be the exclusive U.S. television partner of the British sensation.

The 30-year-old Breazeale (17-0, 15 KOs) has knocked out nearly 90 percent of his opponents since turning professional after representing the United States at the 2012 Olympics. Standing at 6-foot-7, the Los Angeles native is one inch taller than the 6-foot-6 Joshua. The former NCAA football quarterback is coming off a career-best victory of previously once-beaten Amir Mansour on Jan. 23.