A defiant Josh ‘Tartan Tornado’ Taylor insists that he WON’T give Jack Catterall a rematch after successfully defending his undisputed light welterweight championship against him with a 12 round split decision on Saturday night at the SSE Hydro Arena in Glasgow, Scotland.

As far as Taylor (19-0, 13 KOs) is concerned, he dominated WBO mandatory Catterall (26-1, 13 KOs), taking advantage of him fading in the second half of the contest.

“He never won the fight. There is no need for a rematch,” said Josh Taylor to Sky Sports after the fight.

The boxing fans on social media and the media largely believe that Catterall did enough to deserve the victory with his boxing in the first half of the fight, and in addition to the knockdown, he scored in the 8th round. Additionally, Taylor lost a point in the 11th round for hitting Catterall after the bell.

Although Taylor maintains that he only tapped Catterall to let him know that it was a good round, the referee didn’t see it that way and took a point off.

It’s kind of troubling to hear Taylor digging in his heels and refusing to give Catterall a rematch given the huge backlash from fans over the results of the fight.

“I’m pissed off with the performance I put in, but I’m happy I got the right results, and the right man won in the end,” said Taylor to iFL TV on his controversial win over Catterall. ‘It was closer than expected.

“Everyone expected me to blow Jack out of the water, and I think that’s why everyone is surprised. I was a little bit too hesitant, too tense, trying too hard.

The pressure of being back at home again, but I loosened up in the fight and started taking over in the second half of the fight. I made the weight well.

“I got caught down low, and he hit me and I went down,” said Taylor on getting knocked down in the eighth round by Catterall. “I was pissed off. I got caught switching off a little bit.

“He caught me while I was down. Fair play. It was a good shot. I got up and I was fine. I thought I won the fight. I thought I took over in the second half of the fight.

“Yeah, I thought it was a close fight, to be honest, and with me getting a point taken off, it made it even closer.

“I don’t really understand. I don’t know why Marcus McDonnell took a point off from me? I started at the end of the bell, ‘Well done,’ and he said I hit him. I said, ‘What are you doing? I tapped him in the stomach like that,’ and he took a f**** point off me.

“That made the scorecards a little closer than they were,” said Taylor. “Jack was very negative and was trying to spoil an awful lot. Every time, I would try to get close, he was holding on tight and just holding & grappling with me.

“It was very frustrating, and the referee did the right job to take a point away from him because every time I got close, he was holding on for dear life and spoiling me.

“He wasn’t defensive or anything like that. He was coming in and holding me and holding on, hugging onto me.

“It’s fine. It doesn’t look good,” said Taylor about his cut right eye. “One punch and a few head clashes. I’m always getting f*** cut. I’m not handsome anymore. I’m losing my good looks. I’m getting married, and she’s stuck with me now.

“I’m going to look like Shrek if I keep going,” said Taylor. 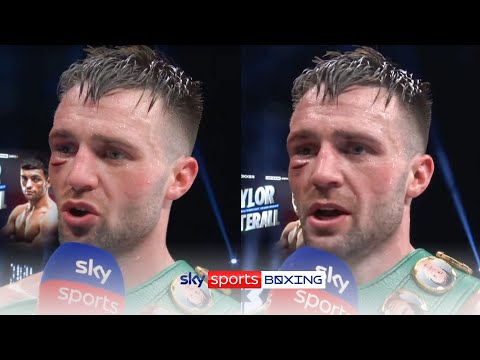