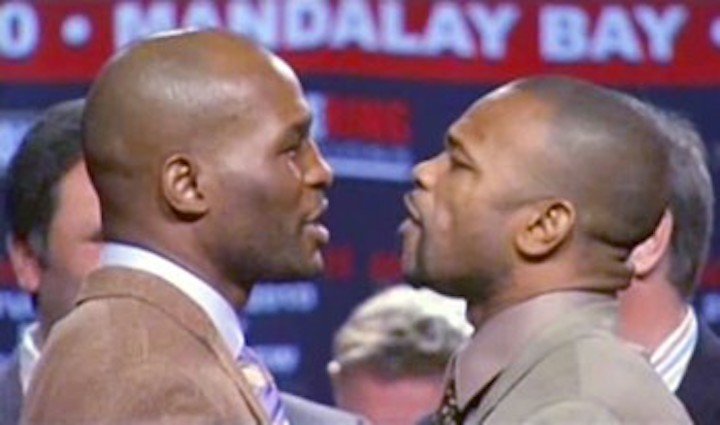 Two all-time greats who fought each other twice – seventeen years apart. One of the sport’s longest running feuds/rivalries saw Bernard Hopkins and Roy Jones Jr. meet in 1993, and then again in 2010. Jones won fight-one, via wide decision, and Hopkins won fight-two, by wide decision.

Come to think of it, has any rivalry in boxing ever lasted as long as this one did?

Hopkins was stung by the loss he suffered in May of 1993, the defeat (actually his second pro reverse, B-Hop famously losing his pro debut) cutting him like a knife and remaining a thorn in his side for almost 20 years. Back in the ’90s, Jones really was untouchable, his sheer speed and brilliance dominating plenty of other fine fighters. But Hopkins aged a whole lot better than Jones did; Hopkins being like a fine wine, his real greatness coming out as he hit the age of 36 (his dismantling of Felix Trinidad) and beyond.

And by 2009, Hopkins had achieved almost everything and more he had ever set out to accomplish: multiple world middleweight title defenses, big wins over Trinidad, Oscar De La Hoya, Antonio Tarver and Kelly Pavlik. Almost everything. There was still an itch “The Executioner” needed to scratch. Finally, in late 2009, Hopkins got the rematch he had been waiting, and waiting for. A deal was reached for Hopkins, now aged 44, to fight Jones in a rematch in Las Vegas.

In a dull fight, albeit one that had its share of controversy, Hopkins won a decision. Jones, a mere shell of his former greatness, threw little in the way of offense (landing just 82 punches throughout, Hopkins landing 180) but he did see his rival hit the canvas – three times. Jones hit Hopkins in the back of the head in the sixth, B-Hop making a meal of it and going down, clutching his head. A three-minute delay and a point deduction later, the fight resumed.

Hopkins went at Jones and the two continued fighting after the bell. Security piled into the ring. This was as exciting as the evening got. Hopkins went down from another Jones rabbit-punch in the eighth, and he dropped again from a low blow in round-ten. This time no points were taken away from Jones, who was basically fighting from memory. Hopkins was way ahead, but in no way was he covering himself in glory the way he had done so many time previously (and would do again in future fights).

It was a near shut-out and Hopkins, in an ugly affair, had wiped away the one loss that had so haunted him. Going into the rematch, many fans had fully expected Hopkins to destroy the faded, suspect-chinned Jones. But it never happened. Perhaps Hopkins had been, and still was, so seriously intimidated by Jones. Whatever, the stinker was over and now Jones would retire, surely.

Instead, Jones fought on until 2018, his career outlasting that of Hopkins’ by a couple of years. But B-Hop had way more left; Hopkins looking good in five of the nine fights he had post-Jones – drawing with and then clearly beating Jean Pascal and then, after two bad nights against Chad Dawson, seeing off the much younger Tavoris Cloud, Karo Murat and, in his final win, Beibut Shumenov.

Roy Jones went out a winner, beating Scott Sigmon via decision, while Hopkins went out (literally) after being stopped by Joe Smith Jr, who knocked him clean out of the ring for an eighth round TKO win.